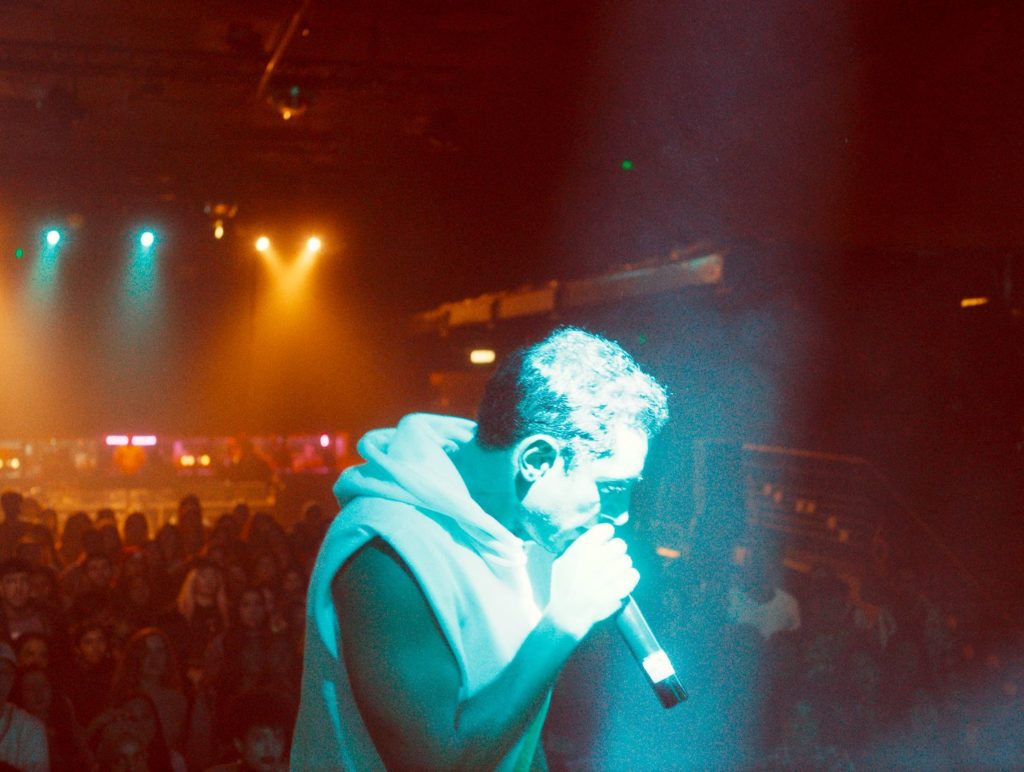 “You rap so much about where you’re from, but when was the last time you went home?” Zed’s ex-girlfriend, Bina, inquires. It’s after an energetic performance at a New York venue, and British-Pakistani rapper Zaheer or “Zed” (Riz Ahmed) has just been asked to open for a big-timer’s European leg of the tour right away. After hustling for fifteen years, he might have finally stumbled across the one opportunity to make it big. But as he quickly squeezes time to see his family before the tour starts, his legs succumb to numbness and he is hospitalized.

Yes, the premise sounds like Sound of Metal. But believe it or not, the rough-edged but calm demeanor of Sound of Metal doesn’t compare to the insult-flicking or wildly hallucinatory images that Mogul Mowgli flashes to the audience. Bassam Tariq’s familiarity with the supernatural psyche to disorient normalcy fits rights into this story, co-written by Tariq and Ahmed. Though this is his first fictional narrative, Tariq is no stranger to contemporary portrayals of Muslims on screen. Ghosts of Sugar Land, which follows an American’s journey to becoming a radicalized Muslim, was gripping, but had the surprising element of being hauntingly lasting. Even before the announcement had been made, one could imagine his hand at Blade with Mahershala Ali.

The surrealism within Zed’s physical decline and dreams slipping from one’s grasp makes for easy comparisons with the antics that occur in FX’s Atlanta and Ramy. But apart from the visual sensations and remarkably different career structures between Paper Boi and Zed (or even Donald Glover’s Childish Gambino), I would compare Zed’s struggles to that of dumbfoundead, a Argentine-American rapper of South Korean descent. In the 2016 documentary Bad Rap (an interesting relic in Awkwafina’s rapidly expansive filmography), the Otherness that exists outside the country’s racial binary system places Asian Americans in an interstitial space that makes entering a such a creative field especially harder. Though Zed feels comfortable in his own rhythm and identity, his communities at home and at the mosque don’t feel as strongly about his public persona as a “coconut” (their words, not his). The complications of Otherness also show in a scene that blends both memory and imagination: Zed finds himself at a rap battle and loses the audience when he asks his racially-charged Black opponent to look at the mirror and see that they’re all in the same boat (one could see a similar discrepancy in a rap battle between dumbfoundead and Conceited that was featured in Bad Rap).  For most of the movie, Zed’s rationale fits the bill of a flawed character, but for the price of desiring internal validation masked as external, I suppose he had to afford to forgo logic.

It would be one type of movie to follow his five stages of acceptance of his diagnosed autoimmune condition, but Tariq and Ahmed took the time for other opposing forces to have their own on-screen moments, including the Pakistani diaspora in Britain, his hard-to-please father Bashir (a supporting role strongly provided by Alyy Khan), his one-sided beef with Soundcloud rapper RPG (Nabhaan Rizwan), and a mysterious man in a mask that appears during Zaheer’s tumultuous mind slips. On the one hand, it is hard to watch someone’s joy and hope drain from their face. On the other hand, watching Zed fend off his family and societal doubts is a fascinating boxing match. Those who are familiar with Ahmed’s music career, particularly his diasporic break-up album The Long Goodbye (some of the songs are featured in Mogul Mowgli, though sadly without Mindy Kaling’s interlude), will find that his bars and flow come much more naturally than an actor who hasn’t developed the mouthfeel of politically or personally charged lyrics.

Ahmed wrote a role that was tailored for him, but the outer members of Zed’s life fulfill a rich complexity to the issues that aren’t easily resolved by the end. Should he proceed with an experimental stem cell therapy that could affect his fertility? Should he give up his opening spot to RPG, famous for “Pussy Fried Chicken?” Should he reach out to Bina, who seems to be happier without him? Unlike the end of The Long Goodbye, which settles in the idea that karma will set up the lessons, Zed’ll learn to conquer through one step forward at a time.