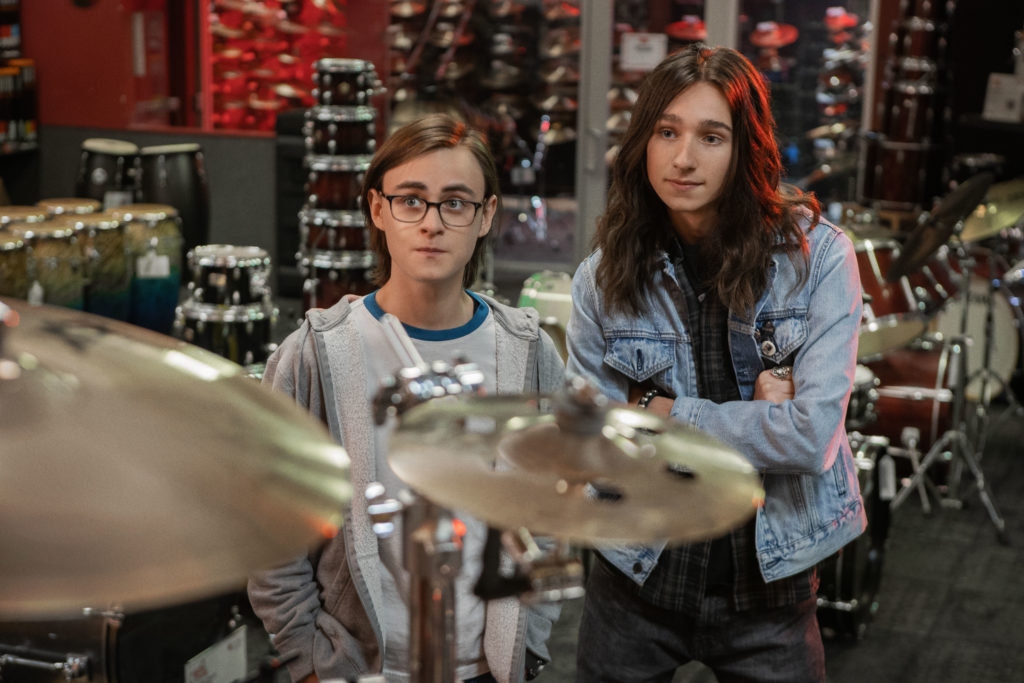 Sometimes I love to ruminate about the upward fail of white men through the career trajectories of D.B. Weiss and David Benioff. After losing the thrones of their TV legacy to the derisive finale of Game of Thrones and subsequently losing the contract for the next Star Wars trilogy, they decided to nestle their careers in a multi-project Netflix deal. While I am mildly interested to see how they’ll approach the densely methodical The Three-Body Problem, I’m not going to hold my breath for the next great thing. Remember Confederate?

But what they’ve done so far has been a bit surprising. They were executive producers for Benioff’s wife’s show, The Chair, which featured a stressed Sandra Oh in a prestigious university set in a fictional New England town (well, Pembroke is a real town, but Pembroke University is not). Weiss flies solo in screenwriting for Metal Lords, a strange and frankly outdated entry in today’s high school movie cycle. Jaeden Martell is Kevin, a bespectacled, soft-spoken kid who follows his best friend Hunter (Adrian Greensmith) as he pursues the next new hobby, which, in this new “This is me now” phase of their life, is heavy metal (or, more specifically, post-death metal). Hunter, who shares the same facial angular theme as Machine Gun Kelly, adapts this interest into a personality abrasive toward everyone, including Kevin. When he gets their band,, Skullfucker to play at the Battle of the Bands (name unbeknownst to the Dean, played by the always-welcomed Sufe Bradshaw), it is difficult to root for him.

Hunter’s rationale for his brusque behavior might be understandable to anyone who’s been an outsider and may have regrettably used the word “sheeple” unironically in their youth. However, there isn’t much to him that wins him any empathy points for about ninety percent of the film. This is an intentional choice, as the film favors Kevin’s narrative of stepping out of Hunter’s shadow and realizing that he’s his own person. This includes a romantic endeavor with Emily, a classmate who plays the cello, and the discovery that he might be liked by other classmates (even if their idea of winning the Battle of the Bands is to cover an Imagine Dragons song). But as best friends, Kevin does look out for Hunter, even if he doesn’t really deserve it.

I’ve learned that I enjoy asshole protagonists by the ways of Booksmart, and if Hunter was written to be a more nuanced teenager, then this could have been a score for Weiss. Alternatively, they could have tried to a more niche audience — what if they enjoyed Pig Destroyer instead of “War Pigs?” What if it was the jocks that were better at shredding the guitar? What Metal Lords show is that with all the ideas rattling in his head, Weiss is unable to transpose them into a coherent song and dance, even if the stakes are as low as a movie about friendship.