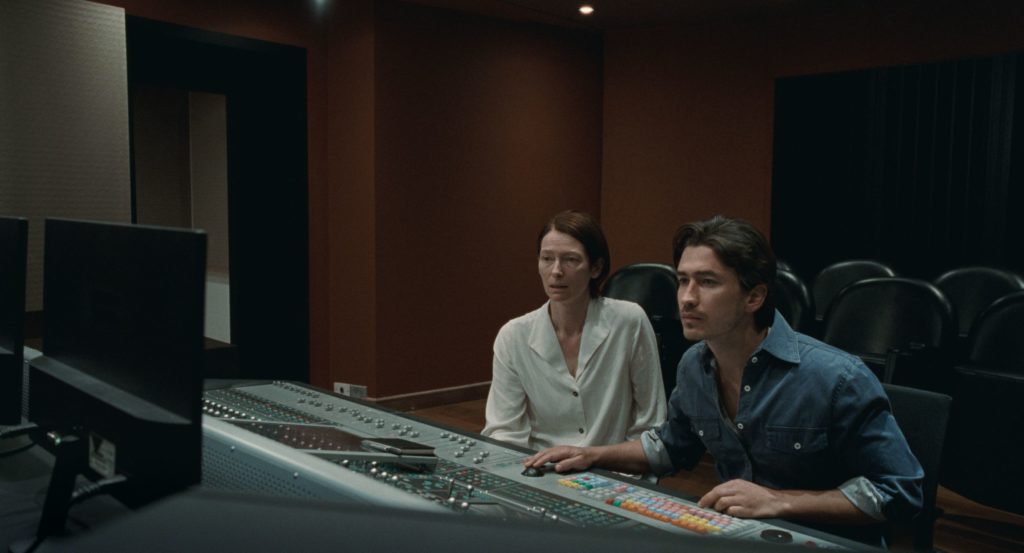 If you know one thing about Memoria, the new film from the great Thai filmmaker Apichatpong Weerasethakul, it probably has to do with its unconventional release strategy. Rather than the standard rollout (New York & LA > limited release > wide release, if it’s lucky > streaming), its distributor, Neon, has opted for an old-fashioned “roadshow” model, in which the film will play in one town after another, one week at a time, in perpetuity, with (supposedly) no plans to release it to release it to streaming or home video– ever. This decision has already kicked off several rounds of debate, but one thing his clear: Memoria has gone from a highly anticipated (if niche) film to an event, with film fans scrolling through the “tour dates” on the film’s website in hopes of spotting their local arthouse (it opens its week-long run at the Coolidge this Friday, 4/22; if you miss it, you may be able to catch it 5/13 at Amherst Cinema or 8/26 at the Harvard Film Archive). Memoria’s release plan has people talking, and in a world where a major director’s latest experiment can be instantly buried under the Netflix content waterfall, that can only be seen as a win.

A note before we proceed with the review: as I write this, it has been nearly four months since I’ve seen Memoria (as a critic, I actually did receive a screener DVD, but did my due diligence by renting the screening room at the VU and projecting it myself). I am opting not to revisit it before seeing it again this weekend at the Coolidge, in order to keep the experience as immersive as possible. So bear in mind as you read this that I am recalling the events of this mysterious film from a distance, a little like recounting a dream– which may actually be the best way to describe an Apichatpong film.

Tilda Swinton (the first English-speaking lead in the director’s filmography, though she spends just as much time speaking Spanish) plays Jessica Holland, a Scottish expat living in Colombia. One night she is awakened by a deafening thump, which she later compares to “a ball of concrete hitting a metal wall, surrounded by seawater.” This sound then proceeds to haunt Jessica, for lack of a better word; she hears it at unpredictable intervals, loud enough to send her running for cover, but unheard by anyone else in her proximity. Determined to uncover the sound’s source, she enlists the help of a sound technician (Juan Pablo Urrego), and eventually journeys deep into the jungles of South America. 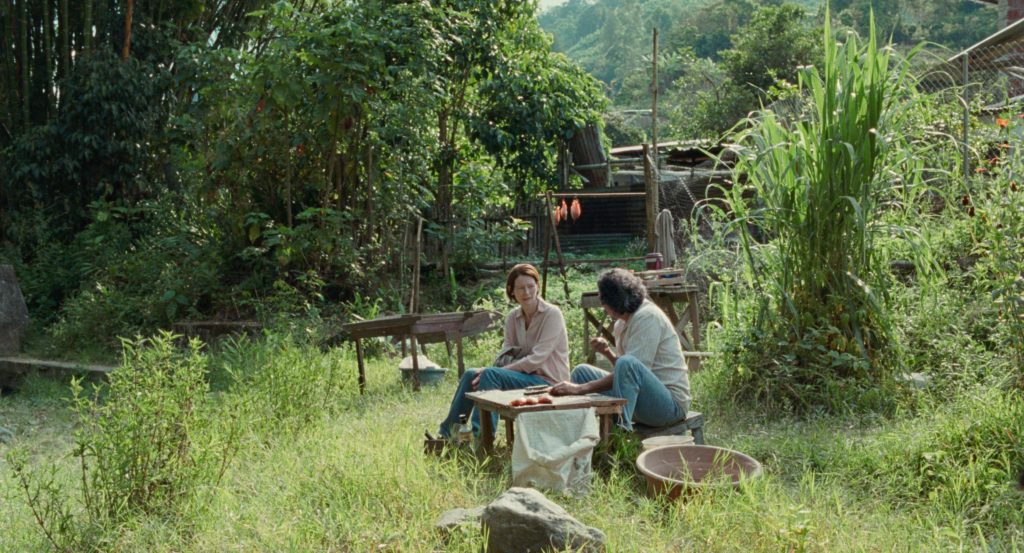 If you’re unfamiliar with Apichatpong and his brand of “slow cinema,” there’s a good chance you might read the above synopsis and come away with the impression that Memoria is a thriller of sorts, a chronicle of one woman’s obsession with unraveling an unknowable mystery. In broad strokes, this isn’t necessarily inaccurate, but belies the film’s meditative and elliptical nature. Like the central photograph in Blow Up, the sound in Memoria is the easiest hook on which to pin a synopsis, but it is only the most easily defined element in its dreamy haze. The point isn’t the sound, or even Swinton’s quest for the sound’s origins; it’s the sensation of trying to place a sound you’re not entirely sure you didn’t dream in the first place.

For that matter, it’s never quite clear, to us or to her, how much of Jessica’s life itself is a dream. Though she makes passing reference to writing or translating poetry, we never quite get a clear bead on what she’s doing in Colombia. She pops up in a number of odd locations– a hospital, an archaeological dig, an art gallery– on apparent business, but for obscure purposes. At one point she returns to the recording studio to follow up with Hernán, the engineer who helped her reproduce the sound, only to be told that no one by that name has ever worked there. Later, deep in the jungle, she meets a different Hernán– older, with no apparent similarities to the first Hernán– who serves as a “human antenna” to alien memories, and possesses the ability to “die” for several minutes at a time. Whether the two Hernáns are related is never answered, or even directly addressed; what’s important is that spark of coincidence that fires in Jessica’s already searching brain.

And, of course, the sparks that fire in our own. Reviewing Memoria, or any film by Apichatpong, is a challenge, because they invite the viewer to meet them more than halfway, to make their own connections. My interpretation of the film– of what it’s even about– might differ completely from yours, yet both may be entirely valid. In the film’s final frames, we do finally see the source of the sound (which I will give you five dollars American if you can guess ahead of time). This image explains both everything and nothing; it throws a new light on the events that precede it, but raises a host of questions of its own. Whatever you think it means– if you think it means anything at all– will likely come down to you. 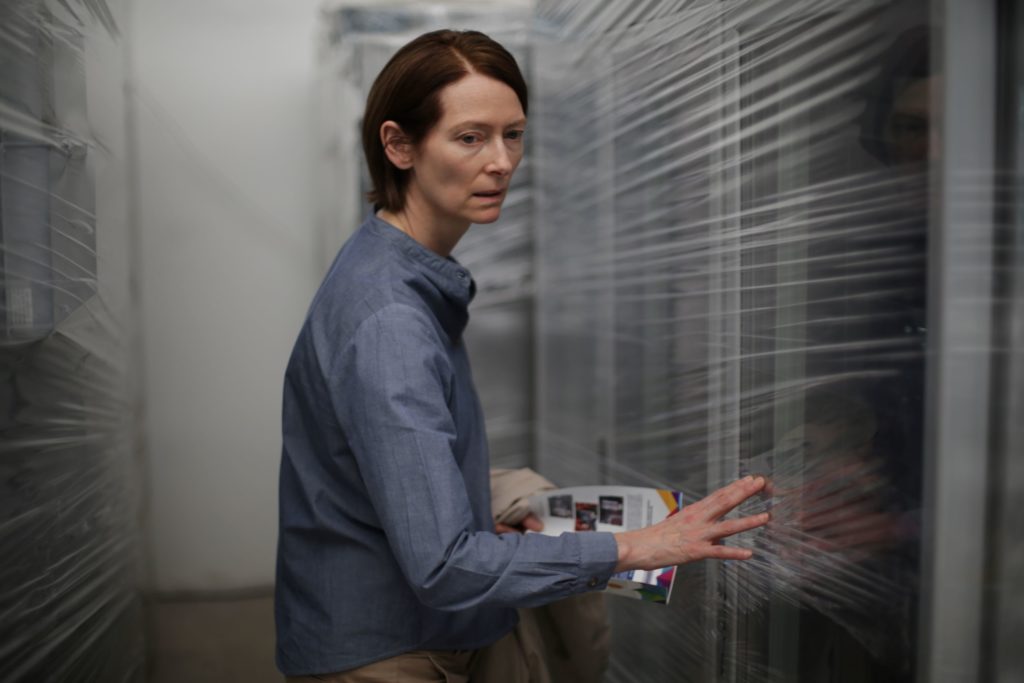 So what’s my takeaway? To me, Memoria is about, well, memory: photographic memory, memory lapses (in one conversation, Jessica and her sister can’t seem to agree whether a family friend has been dead for years of if they just saw him the other day), memories that, against all rational logic, have been passed down subliminally through generations. Jessica has a sound in her head– maybe only in her head– which she can’t quite put her finger on nor think of anything else. Rather than reach anything approaching closure, her quest to solve this riddle only exposes her to any number of further unknowables. At least, this is the version of the film that’s been rattling around in my head for the past few months; when I see it again on Saturday, I might have a different experience entirely.

Which is why I think I ultimately side with Neon on the matter of Memoria’s distribution plan. Though I’m sure I would feel differently if I lived in a rural area or was otherwise unable to attend a screening, the fact is that some films are better served by the theatrical experience than by home viewing– all films, one might argue, but particularly those whose charms are textural rather than plot driven, and not easily sussed out amidst the general noise of day to day life. Time will tell how long Memoria’s endless tour will last, but for now, I’m looking forward to watching the conversation around it travel from city to city, a rare bastion of regional discussion in the increasingly globalized world of film discourse. Here’s hoping it will come back to our neck of the woods early and often.