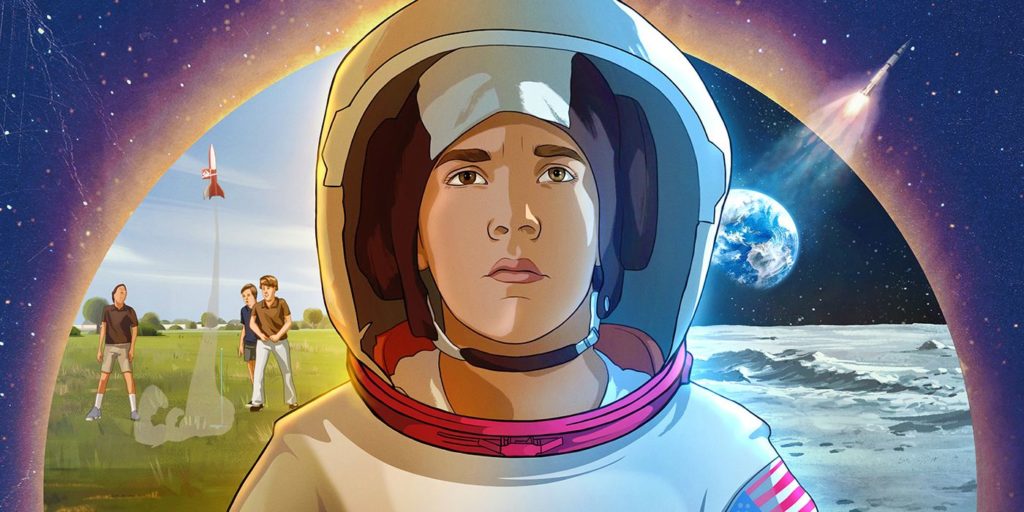 Milton Greene – “Listen to me damn it, I’m a doctor!”
Jack Donaghy – “Of history! In what emergency would you be necessary? If someone wanted to know whether the ‘60s were awesome or not?”
Milton Greene – “They were!”
—“Christmas Attack Zone.” 30 Rock, season 5, episode 10.

Have you ever wanted to have a beer with Richard Linklater and listen to him wax nostalgic for his Texan childhood? Well, in another example of an auteur filmmakers putting Netflix cash to good use, Apollo 10 ½ is essentially just a chill BBQ in 1969 Houston, a tale of one kid’s summer rendered in eye-catching rotoscope animation. Technically the film is about a young boy being recruited for a secret mission to the Moon because the lunar module only fits a kid, but that hardly matters. Mostly we’ve got Jack Black’s easygoing narration of how cool it was to be a kid during the age of astronauts and airborne chemicals.

Stanley (Milo Coy, with Jack Black narrating as his older self) is a nine-year-old kid growing up in Houston with his parents and many siblings. His mom is in grad school, his father works at NASA (on the logistics side, not an astronaut). The moon landing is upon them, but that’s only one thing going on. There’s pinball, public pools, bikes, hippies, plywood theft, flash floods, drive-in theaters, regular theaters, leftovers, everything a kid loves and hates. There’s also a couple of government agents (Glen Powell and Zachary Levi) who recruit Stanley for the aforementioned Moon trip, placing him in an intense training regimen under top secrecy. This is very real, and definitely happened.

With Waking Life, Linklater used rotoscoping to give his vignettes the heightened visuals of the dreams they describe. A Scanner Darkly uses rotoscoping to bring texture to a grim world of hidden identities and psychedelic overdoses. Here, the man uses animation to render childhood in spectacular technicolor that captures all the warmth and innocence of being a kid in a big wide world, while also giving us (animated) historical context. Apollo 10 ½ is not as stylized as Waking Life or A Scanner Darkly, but it still makes some interesting moves. One standout segment is just Jack Black listing TV shows that aired in 1969 as each opening credits sequence appears on screen and we see tiny rotoscoped versions of Kirk and Spock. There’s even a scene from The Sound of Music during a day with grandma and a family trip to see 2001: A Space Odyssey. I’m not familiar with the licensing costs of films and shows if you’re also animating over them, but I’m impressed he got them all in. Thanks Netflix!

Apollo 10 1/2 is a project I’m glad Linklater was able to busy himself with during the height of the pandemic. Though some might roll their eyes at one man’s nostalgia, the specifics of Milo’s joys and the melancholy of the climax set it apart from what could feel like fan service or “remember when” jokes. That’s what makes Linklater the best! It will be a fun family watch, especially if parents get to place themselves in the action. Although no offense, I feel like parents now were mostly born in the ‘80s and ‘90s. But no one loves ruminating on the inexorable march of time than Rick.

Available to stream on Netflix Friday, 4/1