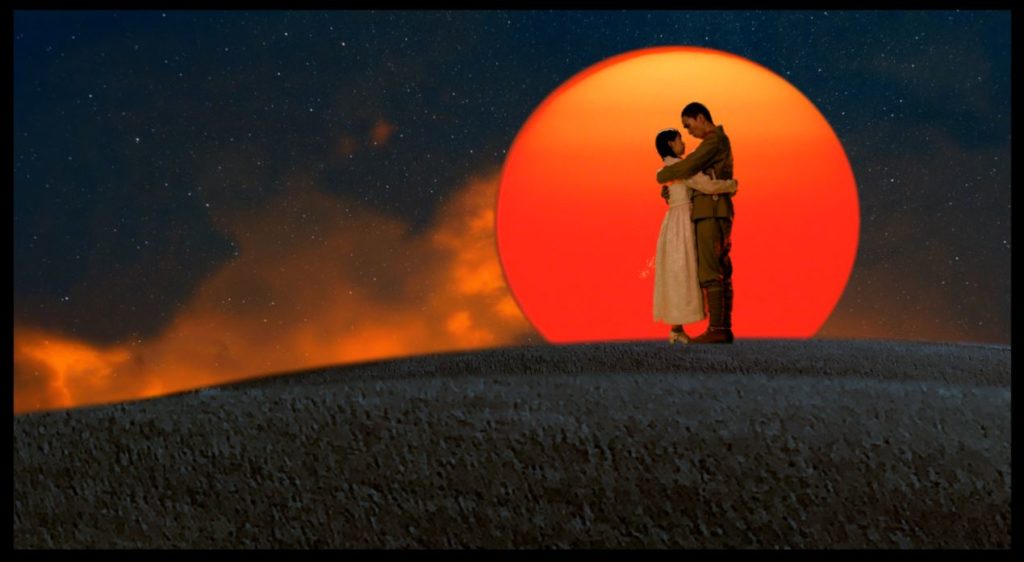 Before departing from this material world, underground hero Nobuhiko Obayashi had his last directorial go-round with Labyrinth of Cinema. For those who are familiar with Hausu, a texture-patchwork horror that reached a belated popularity in America long after its 1977 release, Labyrinth of Cinema stands as proof that his lawless imagination had resisted any form of aging degeneration. In this film, each scene exists like a firecracker with optical ammunition akin to a sky full of pyrotechnics, composed of deep-seated film influences, uncompromising identity, and chimerical humor. If Obayashi was looking for a final celebration, Labyrinth of Cinema is the party favor.

There might be a joke somewhere in this synopsis: a film historian (Takahito Hosoyamada), a film enthusiast (Takuro Atsuki), and a monk-turned-yakuza member (Yoshihiko Hosoda) walk into a movie theater on a rainy night in Onomichi (a seaside town where Obayashi grew up and set several of his films, including 1983’s The Girl Who Leapt Through Time). The theater is hosting its last marathon before closing the doors for good. During a particular lightning strike, the three moviegoers are transported right into the films, which were curated to depict Japan’s participation in war, both civil and international.

In its barefacedness, the film’s odyssey runs parallel to Obayashi’s life, crafting a fantastical conclusion. Though romance bounces between the primary and secondary pursuits for the men (movie star Noriko, played by Rei Yoshida, is often the damsel in distress from the Boshin War to Pearl Harbor), Labyrinth of Cinema earnestly boldens its name in having the moviegoers navigate through the spanning decades of Japanese film, donned in the garb of either World War II soldiers, Byakkotai warriors, or village civilians. Whether it is from the historian’s accurate recollection of what occurs in history or from seeing this played out on screen before, the moviegoers find that these historical happenings don’t end well. Leaving little room for phantom allegories or confusion about its grander meaning, Labyrinth unmistakably shares anti-war sentiments.

On paper, the film might seem like a Magic Tree House installation by way of Isao Takahata’s Grave of the Fireflies (perhaps an embarrassing comparison, using mainstream pop culture to such gonzo behavior). Unsurprisingly from Obayashi’s filmography, the movie is decidedly not a pretty movie. Aside from on-screen casualties depicting corruption or death (such as sexual assault or a pale corpse washing up on shore), the spasmodic dialogue and cuts are natural traits of a three-hour movie about a manic love for movies. Audiences who watch these bewildered characters might be calmed by bright screen cards that frequently frame the characters, sometimes giving the impression of an intro theme to the first family sitcom broadcasted in color. On a personal note, the costuming is a big win and may play to those who are unamused by renegade filmmaking; Shigero’s pinstriped suit ornamented by stitched pink roses during a rainstorm and Fanta G (the fourth-wall voice played by musician Yukihiro Takahashi) in an instantly iconic cream-colored boyish-senior outfit makes me feel that Obayashi could play to all aesthetics, if he wanted to.

And so through it all, the ending left me unexpectedly teary-eyed. Fanta G, in all grandfatherly wisdom, finalizes the wild ride with the all-knowing truth that everyone should watch more movies to make our futures better. The parting optimism seems saccharine, but in the end, who are we to deny that the labyrinth of cinema can be found in the heart of any film lover?

Theatrical premiere run!
Screens 1/14-1/16 @ Brattle Theatre (and stick around for the late-show screenings of Hausu on 35mm!)