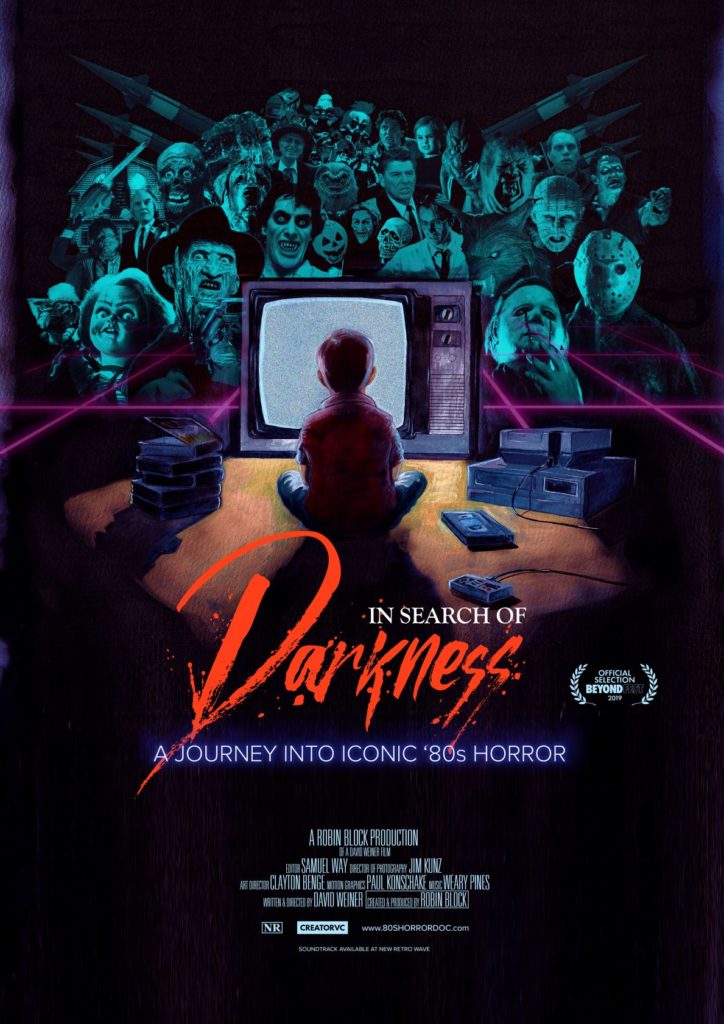 As any horror fan will tell you, the 1980s were a special time for the genre. Pound for pound, they may not have been horror’s best decade; the decade’s films don’t quite measure up to the foundational mythmaking of the 1930s, nor can they compare to the 1970s’ streak of stone-cold auteurist heavyweights (and, while I might take some flack for this, the 2010s are giving them a serious run for their money for third place). But it’s nigh indisputable that the ‘80s were the best time to love horror. The nascent technology of VHS (and Betamax!) and the sudden ubiquity of video rental stores gave monster kids across the country previously unheard-of access to decades of unheralded classics. Magazines like Fangoria and Gorezone gave fans both a sense of community and an authoritative guide to the burgeoning genre. And, thanks in large part to these developments, crazed cinematic killers like Freddy Krueger and Jason Voorhees suddenly became pop cultural icons on par with Bugs Bunny or Mickey Mouse. It is perhaps no wonder that we’ve been seeing a renaissance of modern horror in recent years; for filmmakers who were young in the ‘80s, it was hard not to be inspired by the decade’s embarrassment of riches.

It is this cherished fandom that serves as the foundation for In Search of Darkness, the exhaustive new documentary which premiered last night at Beyond Fest in Los Angeles. Funded via Kickstarter and featuring a who’s-who of genre actors, filmmakers, critics, and enthusiasts, In Search of Darkness is a towering testament to the love and passion inspired by ‘80s horror movies, and while it may not convert many new fans, it’s sure to comfort its intended audience like a warm blanket.

In both format and sheer heft, In Search of Darkness somewhat recalls one of those massive rental guidebooks that used to sit on coffee tables and under entertainment centers, filled with capsule reviews of seemingly any movie you could possibly think of (think Leonard Maltin’s Movie Guide, or the still-updated Videohound’s Golden Movie Retriever). The film is organized more or less in strictly chronological order, with familiar talking heads like John Carpenter and Cassandra Peterson (better known as Elvira) heaping 2 to 10 minutes of praise, and occasional affectionate derision, upon the major works of each year of the decade. Between years, the film’s subjects hold court on a variety of subjects, from the VHS explosion and fan culture to the implications of the genre’s use of sex and nudity. This methodical structure is followed to the last; when you see the title card reading “1989,” you know you’re near the end.

But what the film lacks in flair, it makes up for in quantity. At over four hours, In Search of Darkness joins Never Sleep Again (239 minutes on A Nightmare on Elm Street) and Crystal Lake Memories (400 minutes on Friday the 13th) in the growing subgenre of supersized fans-only horror documentaries. This approach might have been scoffed at in the days of theatrical exhibition (though a shortened theatrical cut is in the works), but it actually makes a great deal of sense in the streaming age; it’s essentially a one-film binge-watch, and its clearly delineated structure makes it easy to take a break and pick it up later. And anyway, if there’s such a thing as too much footage of Tom Atkins reminiscing, it’s news to me.

Does In Search of Darkness break any new ground? Not really; few of its subjects are historically averse to talking about the genre, and many of their stories are well established in horror lore. And, of course, even a film of this length can’t claim to be 100% authoritative. A few major figures are notably absent (Tom Savini springs immediately to mind), and, whether due to availability of talking heads or personal taste on the filmmakers’ part, there are some curious choices in curation (Full Moon High, Stepfather II, and 976-EVIL are discussed, to the exclusion of Bad Taste, The Beyond, and Henry: Portrait of a Serial Killer). And there are just enough flashes of critical thought, as when Barbara Crampton points out how many young actresses were exploited in the name of crass T&A, that one might wish a little more time was spent interrogating the tropes of the era rather than simply relishing in them.

But if you’re the sort of fan dedicated enough to notice these things, you’re also probably enough of a fan not to care. As mentioned by many of the film’s interview subjects, horror fans are to a large degree motivated by nostalgia and camaraderie, and In Search of Darkness captures the joy of smuggling lurid, dogeared VHS tapes to a sleepover. The people on screen are almost universally charismatic storytellers, and, given the sheer breadth of scope, even the most obsessive aficionados are likely to walk away with some new bit of trivia (I had no idea Bill Mosely was cast in Texas Chainsaw Massacre 2 after appearing in a student film parody entitled The Texas Chainsaw Manicure). Ultimately, if you’re the sort of person who’s going to like this film, you probably already know it. As you can probably imagine by now, I loved it.

Premiered Sunday, 10/6 at Beyond Fest
For updates on availability and future screenings, keep an eye on 80shorrordoc.com

Tags: David A. Weiner, documentary, horror, In Search of Darkness