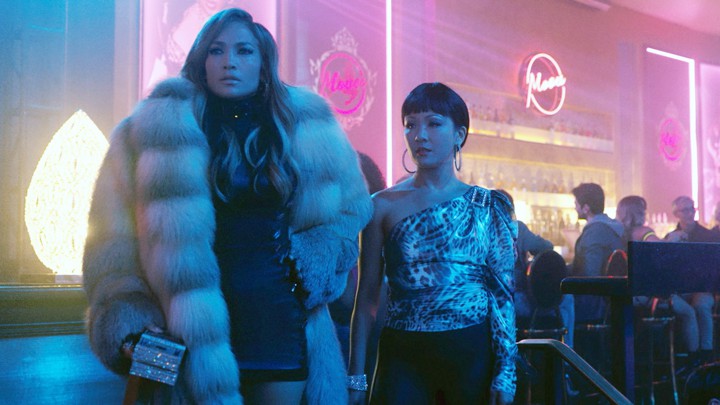 For all of the things that strips clubs are assumed to be, the one about being “strictly business” feels a bit undercut. Given that all parties are respectful and aren’t being weird about it, the experience double-plays as a good time and an honest transaction. This article won’t be a detailed report of all the monetary transactions that occur at a strip club (I will say that an employee once called me a Cabbage Patch Kid while on stage — that’s neither here nor there), but dancing is a straightforward hustle. And hustling is putting in more elbow grease than is adequately required to produce a financially better output, which is more or less what a great visionary had meant.

The general synopsis of Hustlers may have pulsated under the glossy celebrity guests, sleek bodies, and sensual (and, eventually, coerced pharmacological) manipulation during its pre-release marketing, but the skeletal breakdown is that a top-earning stripper, Ramona Vega (Jennifer Lopez), steals from Wall Street businessmen to upkeep her lavish lifestyle. She enlists Destiny (Constance Wu), Mercedes (Keke Palmer), and Annabelle (Lili Reinhart) to pull off her plan, which makes sense in broad strokes. In the wrong hands, the movie could have suffered and we’d have to wait for A24’s Zola for the next great stripper saga. But director/screenwriter Lorene Scafaria took the original New York article in one hand and a DVD copy of The Wolf of Wall Street in the other, and shook both items at the sky and said, “For women!”

The story is told by Destiny, who is recounting the story to a journalist (Julia Stiles — fun party trick: if you mention that Stiles is in the movie without elaborating, around 60% of people’s eyes will go wide) a year before the article is published. One of the more treasured aspects about the movie, especially in today’s trigger-happy remakes and rehashing, is that the story was allowed to sit for years, living through the Obama administration and aging long enough to be in seventh grade. Once in fruition, Scafaria had scented the narrative with nostalgia to saturate some of the script’s contemporary beliefs (as we now should know that shouting “Lucy Liu!” at an Asian person is racist and not a compliment) and cameos (such as Cardi B, Lizzo, and G-Eazy), giving a trail mix of excitement in the frontal landscape of pop culture and in the back burner relics (including bebe-branded wear, that taser incident, Kim Kardashian’s prototypical face, and “Ursher, baby”). Disappointed by the severe cuts from management and burdened by the continuous chase of making ends meet, one could assume that dollar signs spring out of Destiny’s eyes when she first sees Ramona, believing that she could learn some tricks for her own financially better output. But similar to most characters in her filmography, whenever a character or an audience sees Lopez on screen, it marks the first sight of someone mesmerized. Ramona’s introductory performance in the movie is quite literally heart-stopping: she swings around in an outfit perhaps made of three silver ribbons and a dignity not unlike her actual dancing prowess. Everything about J. Lo — the down-to-earth Jenny from the Block, the reason for Google Images’ existence, an unopposed dance legend, legitimate career hustler — boils down to this magnetic performance (and to clarify, I for sure am talking about a strip dance) that spells out Ramona’s charm, Lopez’s hardworking ethic, and then back to Ramona again as the HBIC of the club. With Scafaria’s musicality (she is responsible for suggesting “Criminal” for Ramona’s dance and “Royals” for the team’s eventual downfall) and emphasis to portray Ramona’s authentic camaraderie through the team’s ups and downs, it had been about time that a good script and Lopez’s talent found each other.

While the end of the ride is inevitable, Hustlers lets us cheer when it’s all fun and fur coats and lets us ponder the what-ifs when the plan starts to deteriorate and the police hound at their heels. The supporting cast is surprisingly strong and endearing, to the point where I would have preferred seeing more of their over-excitability to Wu’s occasional flatness. There are a lot of moments to laugh at (and thank God you laugh with the girls every time), and it takes Stiles’s role (eg. her shocked expression when Destiny reveals the drugging) to reel you back in from the gambling high. It’s early in the fishing season to see how the Oscar nominations will play out, but Lopez, who hasn’t been afraid to admit when she’s worthy of awards, probably won’t be sitting at home come February whatever the dice may roll. High-risk, high-reward.