There are two things about Thandiwe Newton that I think are cool. Last year, she reclaimed the original Zimbabwean spelling of her name, changing it from “Thandie” to “Thandiwe.” This may or may not have overshadowed Anne Hathaway’s insistence on being called Annie a few months prior to Newton’s announcement, but nonetheless, the desire to change her name thirty years into her career (the pronunciation is also now “tan-DEE-way” instead of “tan-DEE”) is an ascertained power move. The other cool fact is that, per Simon Pegg, she loves pulling pranks on set. There is no other thoughtful follow-up for that except to imagine the cast of Westworld potentially terrorized from plastic wrap on the toilet seat.

I mention these facts as trivial supplementation to the grand presence of Newton on screen. Powerful and voluminous with the sparse need for raising decibels, Newton’s performances have rarely done me wrong. We don’t talk about the choice that was Crash, but I had no doubt that, watching God’s Country, I wasn’t going to find any flaws in the performance. If she must, she will carry the movie on her back and move those Montana mountains. How heavy that must feel will depend on everything else about this movie.

Newton plays Sandra, a professor who teaches public speaking at a college in Montana. While she doesn’t speak much herself, there is not a lot of mincing in the words she utters. After two white men park their truck in her driveway without asking, Sandra follows a reasonable course of action: leaving a note on their windshield (which she later finds crumbled next to the demolished corpse of a bird), confronting them in person (in response to which she is physically antagonized by one of the men), and then towing their truck after their repeated offenses (resulting in an arrow lodged in her front door late at night).

“There’s not another police presence for three hundred miles,” acting Sheriff Wolf (Jeremy Bobb) explains to Sandra when she reports the threat. Initially, Wolf tells her to let it go, as authority involvement will be perceived as escalation. This sort of thing is handled differently in this neck of the woods, he elaborates. But Sandra stands her ground firmly and they search for the men. However, she sees that the Sheriff’s sole presence in the town wouldn’t be able to hold back the groups of men that share a grudge against the police force. I’d hate to think how they see Sandra, someone who looks and behaves differently than they do. 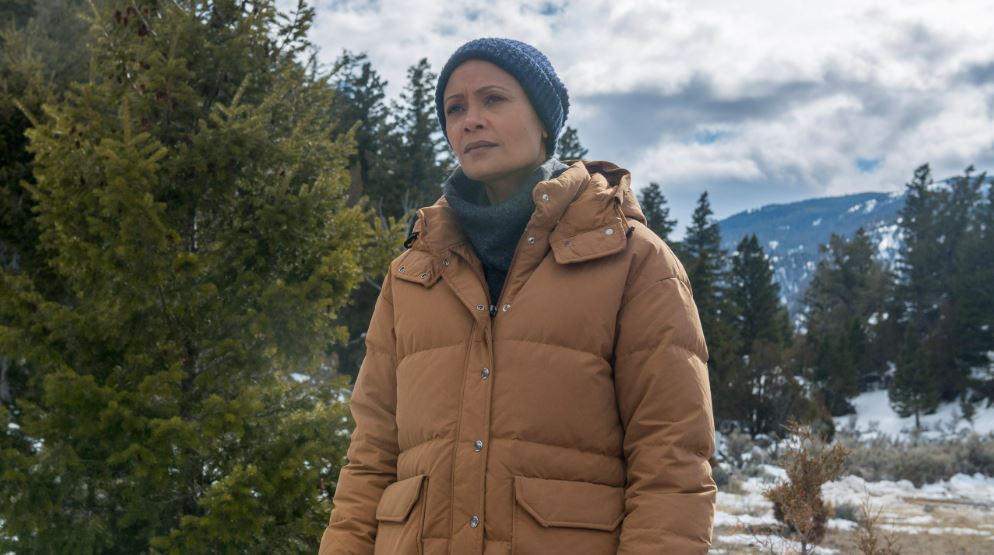 From the emotional backseat, we see Sandra silently grieving over her mother’s death right before the holidays. For someone who teaches about the power of words, Sandra doesn’t speak to her sadness, nor to her rage toward the hiring process of the new dean; the (white) majority had agreed not to “fill a quota.” Yes, sexism and racism exist in both academia and in the sticks. Perhaps because I’ve already seen Regina Hall and Sandra Oh duke it out with systemic white supremacy instilled in prestigious universities, I would have loved to see a story more invested in a Black woman toughing it out with the snowy fields and townies. Originally from NOLA, Sandra’s misplacement glows as a woman who doesn’t back down in prickly situations. A game of chess plays underneath her expressions; she collects cigarette butts from the two men and places them in Zip-loc bags. There is a spoiler-ish reveal that explains her methodical ways, but I’d like to think that she’s learned to deal with this because she exists at an intersection of discrimination that is put on full blast in these barren lands.

When I mentally erase her woes at work, I see that the most memorable parts of God’s Country are of Sandra treading into perilous territory. In watching the backdrop of distant snowcaps and unwavering pine trees, the scenery appears as a calm, wintry vacation for some people. However, the undercurrent of danger is present and sets up the tense premonition that a bullet will pierce through the air at any given point. You don’t need to be a POC woman in lawless land to know fear, but this environment makes it easier to fear for Sandra.

God’s Country is adapted from a short story written by James Lee Burke, in which the narrator was originally a male. The story is available for free and, with respect to Burke, the reworking of the main character to fit Sandra’s story is an incredible improvement in many areas. Reminiscent of the sleeper indie The Killing of Two Lovers, director Julian Higgins uses the language of negative space and quiet acts of determination to make a bold character study, which Newton successfully fulfills (as I would expect). It is the collapsing structure of everything else: the wish-washy “goodness” of the townies, little respite for Sandra’s journey, the one-dimensional academic racism (I’m not sure why one of the most unbelievable acts is a white professor screaming at Sandra about identity politics in front of peers; I know in my bones that this happens word for word, but this conversation in this kind of movie felt like filling a quota).

The Sheriff was right; we rise with the escalation that Sandra and the men stack on top of each other. When we reach the climax, it feels like a let-down and somewhat a sore miss. Legally, a satisfying ending wouldn’t make sense, but cinematically, it would feel righteous. It may be God’s country, but this is Sandra’s property.

Pretty Much Everywhere This Friday