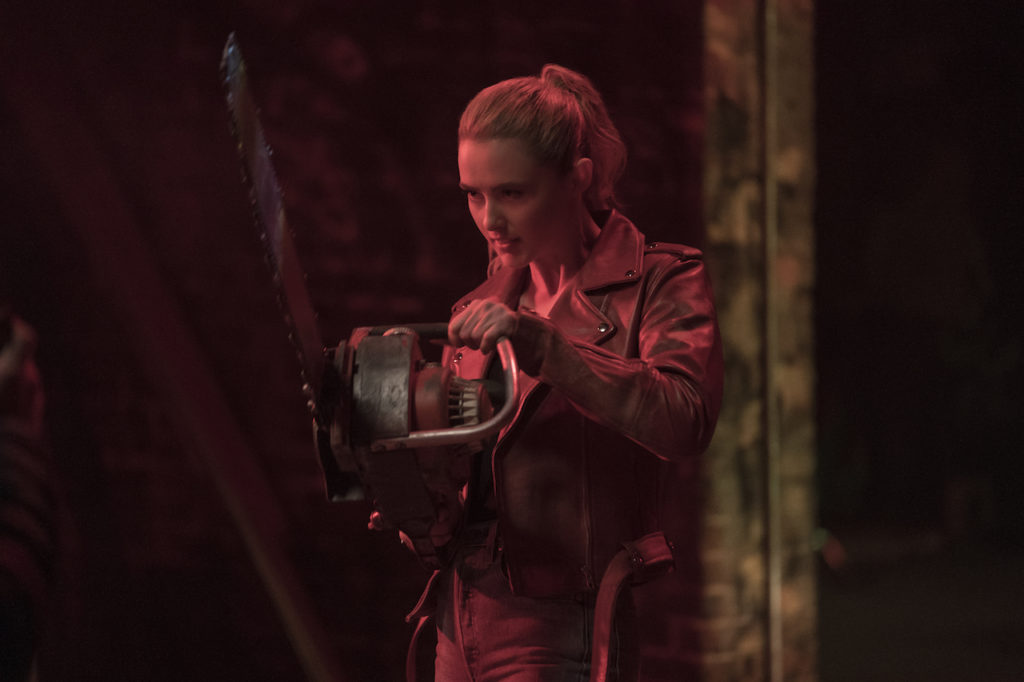 Kathryn Newton as The Butcher in Millie Kessler’s body in Freaky, co-written and directed by Christopher Landon.

Even among the great horror wave of the 2010s, Christopher Landon’s Happy Death Day stands out as a singularly pleasant surprise. The premise– essentially Groundhog Day, but make it horror– could have easily led to yet another of the forgettable, pseudo-high-concept programmers Blumhouse regularly puts out to pad the schedule between hits (remember Fantasy Island?), but thanks to Landon’s knack for character-based comedy, it became something special. The true gag, it turned out, was that protagonist Tree (played wonderfully by Jessica Rothe) wasn’t a final girl, but a first girl, the bitchy sorority sister who gets offed in the first act to clear the stage for the film’s true lead. By focusing on his anti-heroine’s personal journey– while also leaning into her less admirable traits– Landon gave us something rare: a horror comedy with heart.

For his third feature since (following the sci-fi-tinged sequel Happy Death Day 2U), Landon once again puts a horror spin on a magical-realist family comedy favorite. In Freaky, Landon applies his pop-slasher sensibility toward the Disney body-swap staple Freaky Friday. The result, while not quite on the level of his breakout, is enough of a delight that it’s clear: Landon has found his niche. 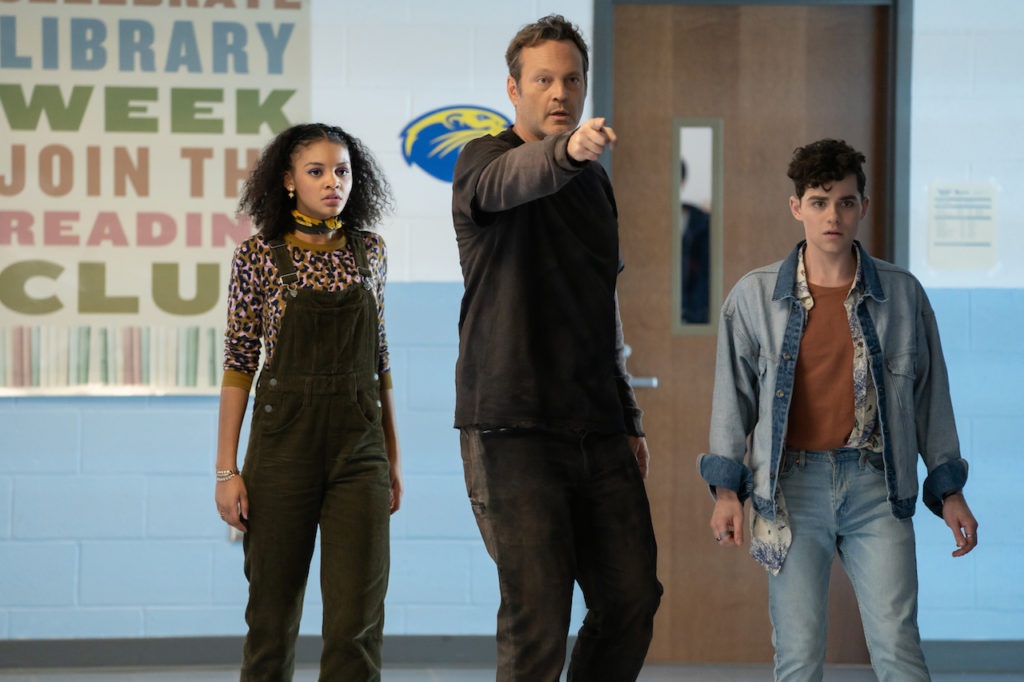 Freaky stars Kathryn Newton as Millie Kessler, your standard issue post-Ringwald pretty-but-shy teen living in the all-American town of Blissfield. On the eve of the big homecoming dance, Millie is attacked by the Blissfield Butcher (Vince Vaughn, not his first time playing a serial killer), a local urban legend who’s said to have picked off debaucherous teens for decades. Millie survives, but there’s a twist: it turns out the Butcher’s longevity is thanks to an ancient, cursed dagger which allows him to hop from body to body. The next morning, Millie is dismayed to find herself in the body of this hulking, transient psychopath, while the Butcher uses Millie’s dainty frame to pass undetected among throngs of potential victims. Joined by her best friends, down-to-earth Nyla (Celeste O’Connor) and flamboyant Josh (Misha Osherovich), Millie has 24 hours to return to her body– and save her classmates from certain doom.

Like Happy Death Day, Freaky doesn’t feel like it should work as well as it does; films based on a single joke, even a pretty funny one (Landon’s working title was Freaky Friday the 13th) tend to wear thin. But Landon once again succeeds through sheer charm and force of personality. Millie and her friends are genuinely likable characters, and the three of them whip banter back and forth with all the speed and dexterity of a classic screwball comedy (albeit with an obvious detour through Heathers). The leads are so well-written, and so perfectly cast, that one can imagine them carrying a teen movie even without all the killing and supernatural goings-on.

Then, of course, there’s that hook. In general, I’ve never been a huge fan of Vince Vaughn; he’s among my least favorite of the post-Sandler boors-with-hearts-of-gold, and what I’ve gleaned of his personal politics hasn’t done much to win me over. Here, however, he’s terrific– perhaps thanks in no small part to the fact that he spends much of the film specifically playing not-Vince-Vaughn. Vaughn plays Millie in a perpetual state of freakout, trying to adjust to her new, ungainly frame as much as the strangeness of her situation (with his feminine mannerisms and exaggerated physique, Vaughn at times recalls Fred Gwynne as Herman Munster). Yet, thankfully, Vaughn does not play the role as a generic sissy-boy stereotype. It’s clear that Vaughn and Newton worked closely together to create something specific, and the role that Vaughn plays in the second and third acts is recognizably the same character that Newton plays in the first (for her part, Newton spends most of the film essentially playing a Terminator, which makes it all the more impressive that her Millie is felt throughout). What’s more, Vaughn does such an excellent job conveying Millie as a character that we occasionally forget that he isn’t a teenage girl; when Millie finally lands a tender moment with her crush, she has to remind both him and us that he would technically be making out with a six-foot-six serial killer with meth mouth. 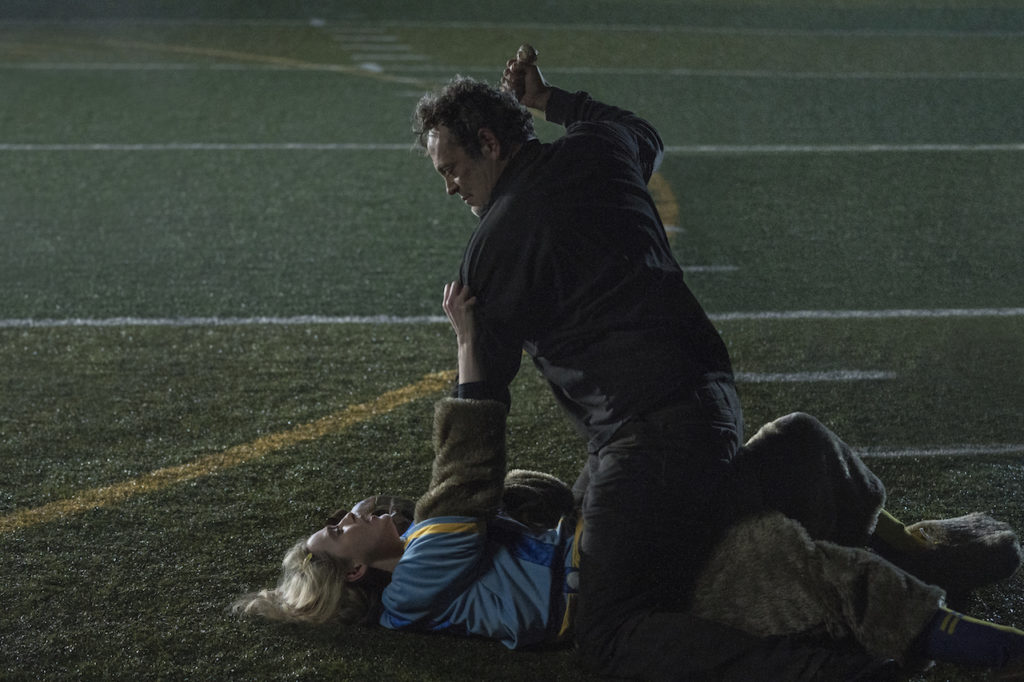 (from left) Millie Kessler (Kathryn Newton) and The Butcher (Vince Vaughn) in Freaky, co-written and directed by Christopher Landon.

While at this point in his career it’s easy to pigeonhole Landon as “the ‘80s horror-comedy mashup guy*,” this label fails to do justice to how modern his sensibility is. As great as they are, many comedies from the ‘80s have a mean-spirited streak about them– to say nothing of the horror movies of the decade. What makes Landon’s films so special is the warmth and inclusivity he brings to the table. Landon is openly gay (as is his Freaky cowriter, Attack of the Queerwolf co-host Michael Kennedy), and while it’s far from true that there were no queer horror creators in the ‘80s– Clive Barker and Don Mancini come to mind– the genre was rife with homophobia. While Landon’s films aren’t exclusively queer-oriented (though one could certainly consider Freaky a trans narrative), they present a world which is friendly and accepting without ever coming off as preachy. In one particularly funny moment, Nyla scolds her friends for misgendering the serial killer trapped inside Millie’s body. If that’s not progressive, I don’t know what is.

Freaky doesn’t quite match Happy Death Day’s heights of giddy lunacy; the emotional beats between Millie and her grieving single mother don’t hit as effortlessly as similar moments in that earlier film, and some of the supporting characters are somewhat thinly sketched (their deaths, while satisfyingly gruesome, go jarringly unremarked on, even by slasher movie standards). But Freaky remains one of the most purely delightful films of the year, a breath of fresh air at a moment when the cultural atmosphere is decidedly stuffy. Landon may take inspiration from decades past, but his vision is completely his own, lacing familiar tropes with whip-smart dialogue and candy-coated visuals (one particularly inspired set piece takes place in one of those indoor blacklight haunted house mini-golf courses that tend to pop up around the off-ramps of middle America). Like its central character, Freaky’s grisly exterior masks a heart of gold.