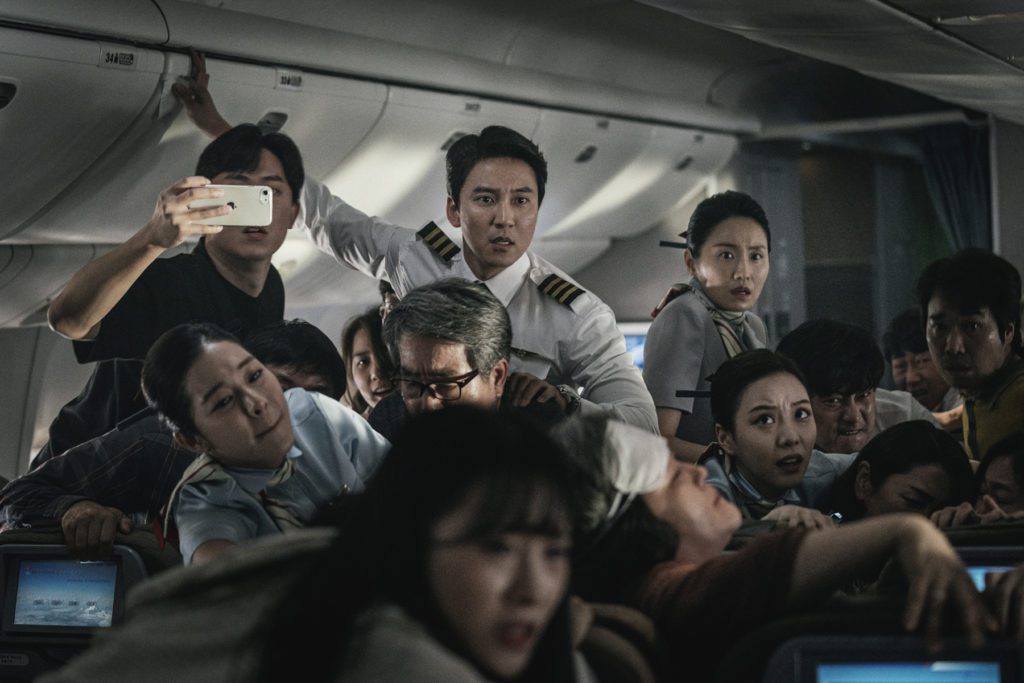 Emergency Declaration, the 2021 Korean plane disaster movie, is the Covid film I’ve been waiting for. Most of the major Covid-era films so far have catered too strongly to the fleeting and frequently changing aspects of pandemic life: lockdown, mitigation, quarantine, technology’s reimagined role in connecting us. The Michael Bay-produced Songbird (2020) might have been the worst offender, even if it wasn’t terrible. It reminded viewers of the worst parts of their own experiences without providing much more substance. Emergency Declaration—from its simple premise of a viral bio-terrorist attack on a commercial flight heading to Hawaii to its micro-geo-political war symbolized like chess pieces through the various passenger responses—is the movie for the moment.

Han Jae-rim’s newest film is the best movie ostentatiously about our pandemic—despite not being about the pandemic. The script was complete by July 2019, months before the pandemic began. Production shut down in March 2020 and again the same August. By most benchmarks, Han’s disaster thriller was more whomped by the pandemic than it was influenced by it. I don’t think I would’ve believed this coincidence so easily without recorded evidence in major news and film publications.

Perhaps it was the lack of foresight into how society and governments would actually respond that allowed for such a prescient and touching film that resonates so well with our experiences of the “long 2020,” as I like to call it. Either way, Emergency Declaration probes our strongest pandemic fears and performs them in the most paranoid and large-emotion means at their disposal: the anxiety associated with a cough on a plane in 2022 is dialed up to the maximum as a symptom of a state-threatening weapon.

A terrorist with bio-chemical experience, Ryu Jin-seok (Im Si-wan), boards a plane at random from Incheon International Airport after cutting open, inserting, and stitching an airborne weapon with an almost 50% fatality rate into his armpit. Paving the way for an unusual terrorist film, he’s one of the virus’ first victims. As an engineered biochemical weapon, the prospects of timely treatment seem dim—resulting in nations with varying qualities of real-life foreign relations with South Korea to deny entry into their airspace. A passenger with a traumatic piloting history, Park Jae-hyuk (Lee Byung-hun), finds himself unexpectedly forced to finish the flight after the plane’s intended pilots succumb to the sickness.

I’m most impressed with the film’s stout politics. The fight to land Sky Korea flight K1501 plays out in grand geopolitical fashion between Korea’s various politicians and ministers and with Japan, the United States, and a multi-national biotech corporation with strong North American ties. But it also replicates the politics without the room for debate among the passengers; they simply act, and are forced to act, without the time for theory, consideration, or occasionally authority of the politicians. One elderly self-appointed germ police officer, for example, monitors every healthy person for the slightest sign of a bump or rash and then shames them into banishment with the rest of the plane’s sick. His feeble self-centered attempts to “flatten the curve” appear rational even if overblown at first, but when edited in a coyly utilitarian fashion alongside the refusal of major nation-states to allow K1501 permission to land, the passenger’s attitude comes off as needlessly isolationist and recklessly amoral.

“That the morality of actions depends on the consequences which they tend to produce, is the doctrine of rational persons of all schools; that the good or evil of those consequences is measured solely by pleasure or pain, is all of the doctrines of the school of utility, which is peculiar to it,” wrote John Stuart Mill, one of the most widely read proponents of utilitarianism. What that means for actual governmental responses to the pandemic, I’ll leave that for you to decide. But for Han’s Emergency Declaration, it means one thing and one thing only: K1501 simply can’t land unless they can find a working anti-virus.

Emergency Declaration is about as big and successful as morally utilitarian films get. China’s major filmic examples of the moral philosophy all come with too much nationalist jingoism, like The Captain (2019), a flight disaster movie based on one of the most famous miracle landings in aviation history. And America’s biggest exemplars are still somewhat philosophically confused (Spider-Man: No Way Home, World War Z). But in terms of major studio films with the power to actually influence audiences on a meaningful scale, I can’t imagine a film with much more effective potential.