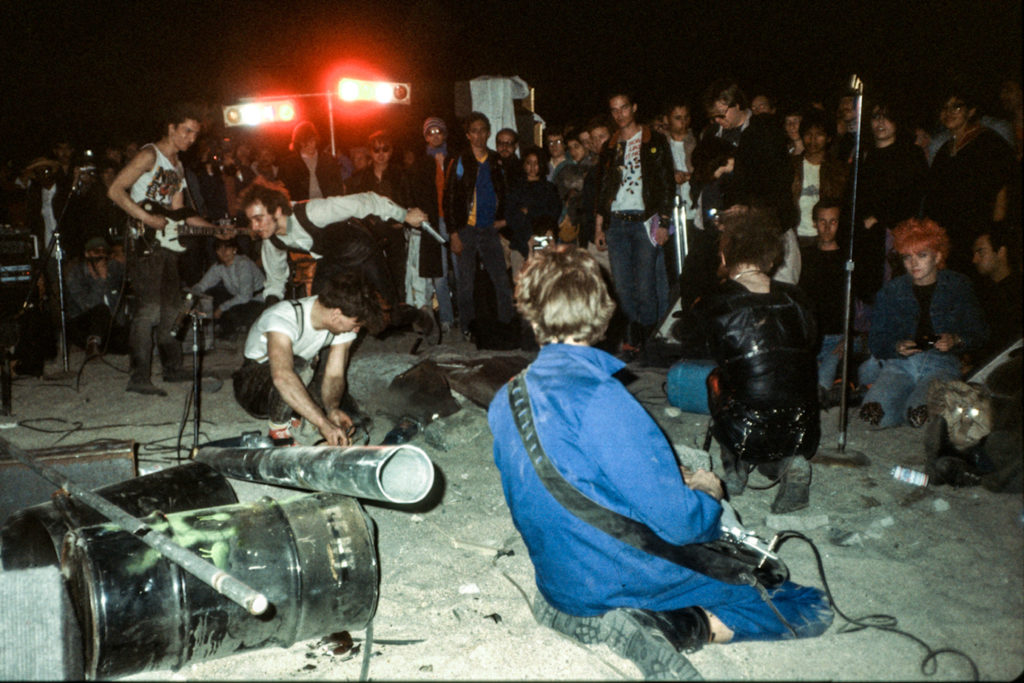 Reviewing Desolation Center for Boston Hassle almost feels like a conflict of interest. Since its inception, the Hassle has been committed to throwing and promoting concerts and art events by offbeat, independent, and often indescribable artists, frequently in alternative venues, while borrowing more than a couple of pages from the early punk playbook. Desolation Center is a documentary about a series of wildly inventive mixed-media concerts thrown guerilla-style in the desert and on boats, springing directly from the legendary Los Angeles punk scene of the early ‘80s. Of course we’re gonna dig this film– and, if you’re reading this, there’s a good chance you will too.

It’s tempting to refer to Desolation Center as a venue, but that’s not quite right. Established in the early ‘80s by promoter Stuart Swezey (who also directed, produced, and effectively serves as onscreen narrator) Desolation Center was the banner for a series of increasingly unusual shows serving the fertile proto-hardcore scene of Reagan-era LA. The tension between the punks and the LAPD (who infamously at one point officially designated Black Flag as a “gang”) was reaching a boiling point, and, as the city’s known punk clubs became increasingly subject to raids, Swezey and other promoters were forced to seek out alternate venues. Swezey’s ingenious solution: leave the city altogether, renting a fleet of school buses and transporting a gaggle of punks to the middle of the Mojave Desert to see the Minutemen perform on generator-powered amps. Perhaps surprisingly, that first show went off without a hitch, emboldening Swezey to embark on a string of shows at increasingly unlikely venues (including a mountain top and a harbor cruise), attracting artists ranging from Sonic Youth and Einstürzende Neubauten to industrial installation artist Mark Pauline. 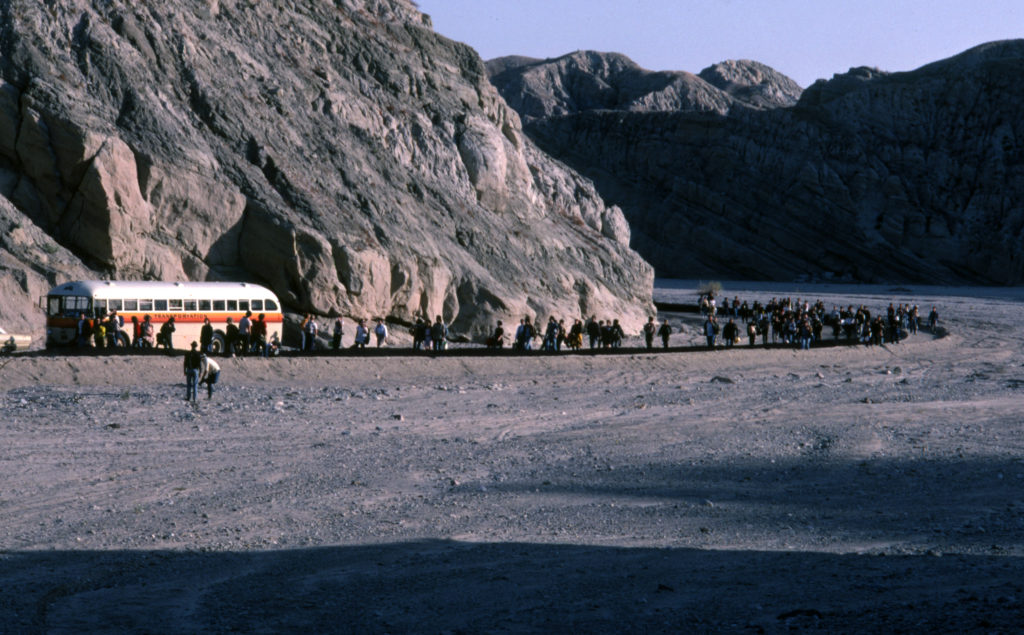 As in many great punk documentaries, a big part of the draw here is the wealth of footage. Like many in the golden age of punk, Swezey and his associates used the newly available camcorder technology to obsessively document their surroundings. Predictably, much of the footage is grainy and the sound muddy, but that comes with the territory, and is a small price to pay to see a shockingly young Kim Gordon sing “Death Valley ‘69,” or Blixa Bargeld chainsawing boulders on top of a mountain, or the late, great D. Boon in any context whatsoever. At times, the low fidelity even helps, as when an actively tripping Curt Kirkwood kills the lights in the middle of an extended Meat Puppets jam, enveloping the crowd in darkness. In that moment, the analog fuzz of the footage perfectly matches the altered state of the crowd and the utter isolation of the locale.

But even when the bands aren’t playing, the footage of the crowds alone is almost worth the price of admission. From the start, the punk era was so easy to caricature that it’s sometimes surprising to see its practitioners as living, breathing people. Far from the violent stereotype paraded in the day’s headlines (as seen in a hysterical montage of local newscasts), these are kids– often shockingly young– in love with self-expression and with the explosion of creativity around them. It’s a depressing fact that rockumentaries tend toward the hero’s journey of the white male, but Swezey’s camera shines a light on a refreshingly diverse scene, and many of the firsthand witnesses on hand as talking heads are women, queer, and/or people of color (I should probably note here that the infamous Boyd Rice also makes an appearance, but his contribution is brief and far from the focus). Punkdom was and is often portrayed in opposition to their hippie predecessors, but seeing all these spiky-haired youths working together to build something special in the desert, the ideological gap doesn’t seem especially wide. For all the snotty lyrics and occasional pyrotechnics, this is far more Woodstock than Altamont. 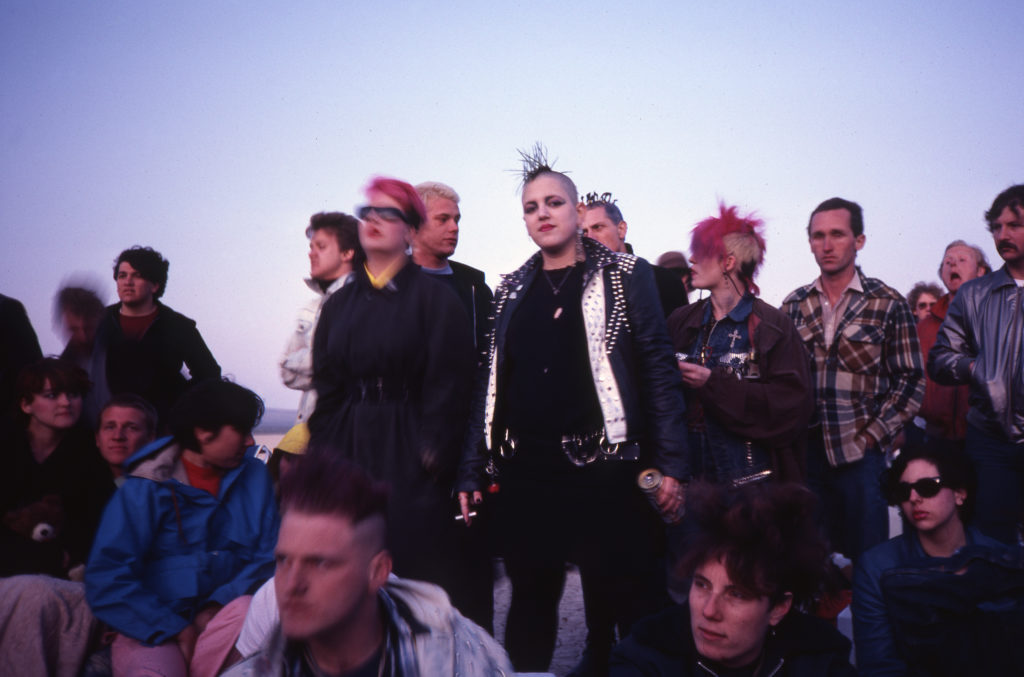 But as much as these shows are a reflection of the past, they’re even more a vision of the future. For starters, the film’s final act portrays the extent to which Desolation Center paved the way for the mega-festivals which now serve as pricey destinations for the elite; Perry Farrell was a Desolation Center devotee a full decade before founding Lollapalooza (in one snapshot almost too good to be true, a shockingly young Farrell can be seen leaning against a rock literally taking notes), and the influence on the aesthetic of Burning Man is self-evident. But culturally, few things could be less different than a scrappy, DIY event thrown secretly in the desert to avoid the cops and a multi-million-dollar trade show put on by and for the richest and most powerful people in the world. Punk may not be dead, but it certainly isn’t at Coachella either.

But, thankfully, the influence of Desolation Center extends beyond Fyre Festival and its ilk. Stuart Swezey obviously didn’t invent the secret punk show, but he did set a bar for creativity that generations of underground oddballs have risen to surpass. Its legacy can be seen right here at the Hassle, and in like-minded DIY organizations across the country. As a film, Desolation Center serves as a rousing celebration of punk rock in all its forms. What’s especially refreshing is that Swezey and his fellow eyewitnesses rarely fall into the smug superiority that frequently taints classic rock documentaries, that if you weren’t there you missed the party. Instead, Desolation Center emphasizes that these were, essentially, a bunch of naive kids who created something extraordinary, and gives the impression that this could happen in any city, at any time, so long as that spark of creativity is there. It’s enough to make you want to seek out the hidden weirdness in your own hometown– or create some of your own.