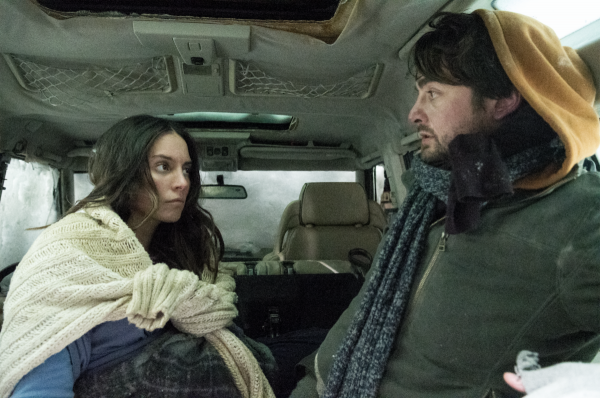 It is unlikely that I will find myself stuck in quicksand or covered in leeches. The odds are nonzero, but they aren’t much greater than zero. All the same, I have (and occasionally reference) a Worst-Case Scenario Survival Handbook. This guide encompasses quicksand and leeches, severed limbs and shark attacks, and a lot about cars: How to Escape from a Car Hanging Over the Edge of a Cliff, How to Stop a Car with No Brakes, How to Perform a Fast 180-Degree Turn with Your Car, How to Survive an Out-of-Control Autonomous Car, How to Survive If Your Car Careens Down a Mountainside.

There is no guidance on How to Survive If Your Car Is Buried Under Several Feet of Snow in the Norwegian Wilderness, which I suppose makes the premise of Centigrade worse than a worst-case scenario.

Naomi and Matthew, our protagonists, are traveling Norway for Naomi’s book tour. Driving one night, the couple finds themselves caught in freezing rain. They make the sensible (and fateful) decision to pull over, wait it out. We meet them the next morning as they stir awake, the sunlight dim, barely able to penetrate the layers of snow sealing the couple within their station wagon. Although Naomi realizes almost immediately that they are trapped, neither register the precariousness of their situation–which, by the way, is made all the more delicate by the third passenger in this chilly car: their unborn child. Naomi eats a sandwich, and they decide, again, to wait it out.

They have little food, less water, no heat. They don layers and scratch tallies in the dashboard. They pee on a towel. They cannot stand up–they have, maybe, eighty square feet to crawl around. They fold down the backseat. They light a candle. They wait. We wait.

Centigrade is, nauseatingly, based on a true story, and director Brendan Walsh wanted the film to be as true as possible. He chose Genesis Rodriguez and Vincent Piazza for the roles of Naomi and Matthew in part because they are in an actual relationship, thus lending authenticity to their arguments, their hurts. The actors are also actually cold–Walsh refrigerated the car to elicit real shivers, and the real crankiness that comes from being cold all the time. The majority of Centigrade is filmed within the tiny confines of this vehicle, heightening the claustrophobia: Walsh effectively brings us into the car with Naomi and Matthew. The film is shot in sequence, amplifying the slow-burning suspense: we see their dynamic distort as the cold seeps into their bodies, as survival becomes less tenable, as their animal selves emerge. This was Walsh’s goal, to capture the emotional turmoil that bubbles when there is nowhere else to go, nowhere to hide.

Their uncertain fate inspires anxiety and is the driving force of Centigrade, but it’s what happens to Naomi and Matthew in the meantime that keeps us uneasy. It’s hard not to draw a connection to the present moment. It’s hard not to become increasingly aware of one’s own trapped-ness. I can say with some confidence that very, very few of us are at risk of being buried under snow in a car, but it’s not hard to relate. The suspense, ultimately, has less to do with whether Naomi and Matthew will make it out alive than it does with what they become over time. Watching their personalities morph in isolation forces us to reckon with the ways our own isolation has changed us, or revealed us to ourselves.

This paragraph has a spoiler in it. Before writing this review, I did some light research into this true story, and found another way in which Centigrade seems to reflect our current time. I found no evidence of the true story. We learn at the end that Naomi survives and keeps writing, which feels implausible–what writer wouldn’t write this story? Normally, I would acquiesce to creative license, and trust that the true story is in there, if just obscured. But Walsh is expressly committed to authenticity, which makes this feel a wee bit like a hypocrisy, especially because he doubles down with an epilogue. This feels emblematic of a time where fiction masquerades often as truth, where any story can be sold as real if the merchant is convincing enough.

All the same, there is a reality that emerges from this speciousness, one that transcends our current moment: the human animal. This beast materializes in the worst of times, when we are vulnerable and cornered, and cannot pretend to be something else. We see in Centigrade the capacity for sacrifice and the depths of love, but we also see the tenuous line between that same love and hatred. We see the extent to which we will protect our secrets, our secret selves. Centigrade is about two people trapped in their car, but it’s also about what happens when you put two animals in a cage, when those animals are people.