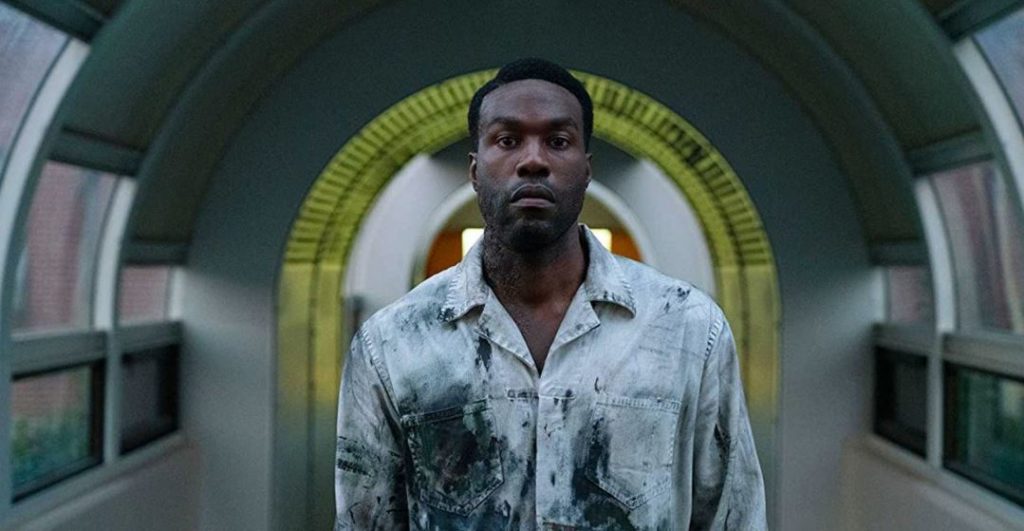 It doesn’t take time-machine nostalgia or a certain passion for the scares to recognize that the original Candyman is a legitimately good movie. This can be mostly accredited to the spooks that eclipse over both urban legend and the actuality of living in this country. Based on his first two films, Jordan Peele’s participation in Candyman‘s resurrection is not surprising, nor is it happenstance. As it is, there is no ghoulish myth behind the Black struggles in America. Horror noire, from Night of the Living Dead to Antebellum, is able to give us the chills while hinting at the reality that racism and its spawns have been integrated in history since the birth of the nation. In Bernard Rose’s 1992 Candyman, the police didn’t bother investigating the murders of two residents in the Black-populated Cabrini-Green until white PhD student Helen Lyle (Virginia Madsen) was physically assaulted (“A white woman got attacked, and they lock the place down.”). Almost thirty years later, refreshing the horrors of being a Black American through a different, frictional lens was in due time.

Say his name five times in the mirror, and the Candyman will appear. The idea of oral folklore remaining the same when handed over from Gen X to millennial to Gen Z might be kinda heartwarming, if not for the fact that I still can’t directly look at myself in the mirror during a midnight bathroom sprint. While I haven’t been part of the horror fan group chat, I still remember that the Candyman’s Blackness was important to the legend even before seeing the movie. To re-mobilize a movement through the repetitive utterance of a Black man’s name wouldn’t be lost on our audiences, IG-black squares or not. Tony Todd kindly reprises the titular role, but at the forefront of this reimagined movement is Yahya Abdul-Mateen II’s Anthony, a burgeoning artist who integrates bold racial themes in his work. After learning of Lyle’s misdeeds (if you need another reason to watch the original, it’s probably to catch the discrepancies that occur in playing telephone-mythology), Anthony utilizes the stories of Cabrini-Green for his next gallery installation.

Nia DaCosta’s take shares similar motifs to its genre ancestors of horror shaken with social commentary. Self-described as a “spiritual sequel,” this Candyman is a revitalizing intake of breath — sharp in moments of body-manip shock, morbidly fun in the body counts. It lifts some familiar settings from the original, such as the graffitied rooms of abandoned buildings in Cabrini-Green, while modernizing some scenes into hot-shot mirror tricks and gratifying visual grabs. It also doesn’t hold its stakes in skin-jumping scare tactics, but with the continuing trend of haunting revisions of old pop songs and predictable plot traps, a film under Peele’s Monkeypaw Productions might be held back from testing out some true mindfucks.

Abdul-Mateen, whose roles seem to exist as prophecies, does a great job bouncing between being frightened, being in love with his art-curator girlfriend Brianna (Teyonah Cartwright), and being Francisco Goya in his Black Paintings era. One would have to be hard-pressed to find another actor that could replicate his performance; his and Madsen’s frantic spiraling descents make for headliner attractions in each film. All the same, the satisfying finale might make one hope that this Candyman can be squared and locked away for good, even if the lore beckons for more.

Now playing in theaters (though the Hassle, as always, recommends the Coolidge Corner Theatre)