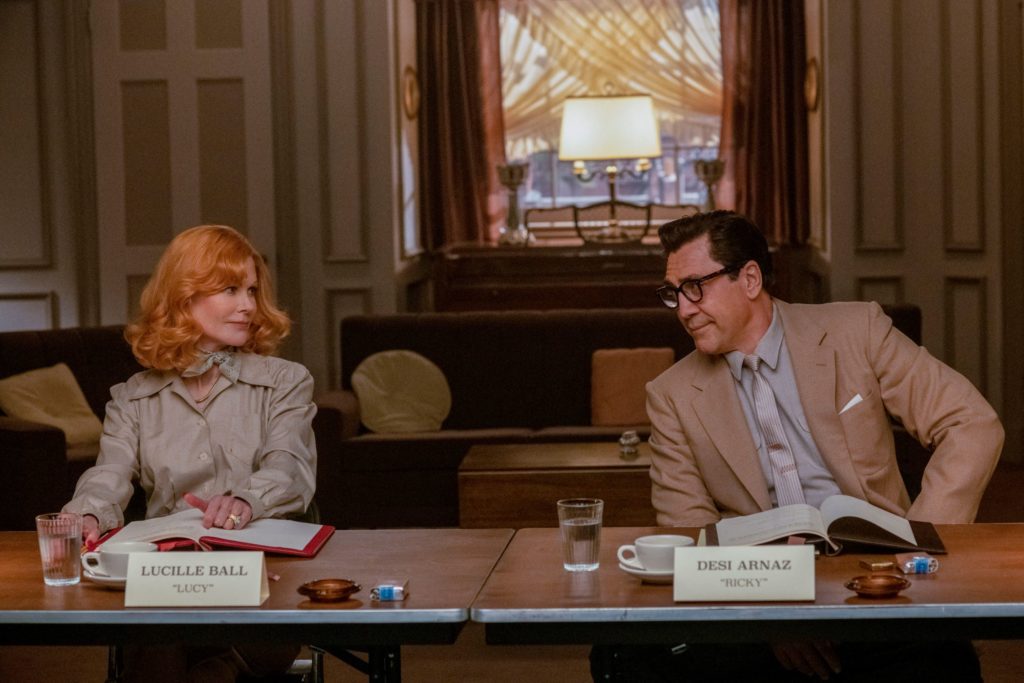 Aaron Sorkin writes the screenwriting equivalent of an optical illusion. When working within his comfort zone– which is to say, very smart characters clipping banter at each other, ideally in a courtroom or walking down a very long hallway– there’s no one better, and at least two of his scripts (A Few Good Men and The Social Network) are easy candidates for the Screenwriting Hall of Fame. But as soon as even one element is removed from his wheelhouse, that same whip-smart dialog abruptly curdles into something excruciating. Sorkin’s latest film, Being the Ricardos, would appear to present Sorkin an ideal playground– the high-speed world of broadcast in the early days of television– but the more it goes on, the more it becomes apparent that Sorkin is out of his league, and the harder his words clatter to the floor.

Being the Ricardos spans a single, particularly stressful week in the production of the iconic sitcom I Love Lucy. On top of the usual hazards of producing a weekly television show in the medium’s infancy, the staff are blindsided by three bombshells: star and creator Lucille Ball (Nicole Kidman) is accused of communist sympathies by radio gossip columnist Walter Winchell; Ball’s husband and co-star Desi Arnaz (Javier Bardem) is the subject of a tabloid expose on his alleged womanizing; and Ball reveals to the producers that she’s pregnant, with the then-scandalous suggestion that they work her pregnancy into the show itself. This leaves the show’s writing staff (Tony Hale, Alia Shawkat, and Jake Lacy) and supporting cast (JK Simmons and Nina Arianda as William Frawley and Vivian Vance) to fly by the seats of their pants, trying their damnedest to put together another episode of the enormously popular sitcom without a clear sense of whether they’ll be employed by the weekend. At the center of it all, of course, are Lucy and Desi, two mercurial talents who will do whatever it takes to come out on top, both personally and professionally. 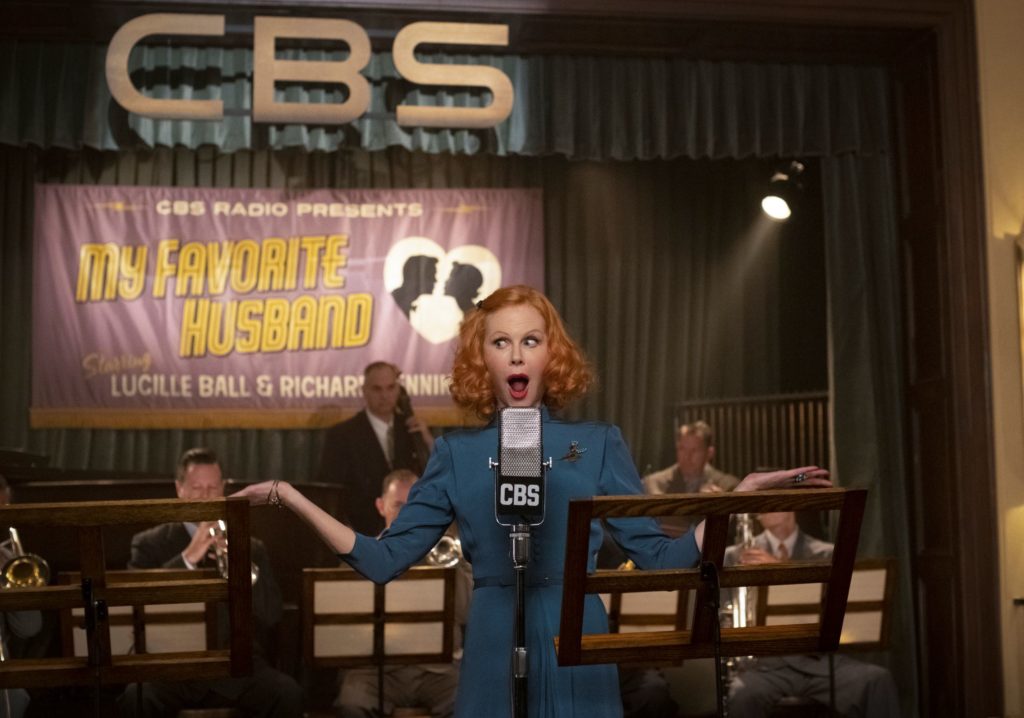 The first hurdle viewers will find themselves faced with is the fact that Kidman and Bardem look precisely nothing like Ball and Arnaz. This is not necessarily a dealbreaker– if I wanted exact replicas, I’d go to Madame Tussauds– but the problem is that Being the Ricardos can’t seem to decide whether it believes that or not. On the one hand, you have Kidman, encased in prosthetic makeup which does succeed in making her unrecognizable, but doesn’t make her look a whole lot more like Lucille Ball. Bizarrely, on the other end of the spectrum, virtually no effort seems to have been made to make Bardem look like Desi Arnaz beyond a pompadour wig and a light coat of bronzer. (Amusingly enough, Simmons manages to look exactly like William Frawley simply by curling his lips over his teeth and hiking his pants up). Taken on their own terms, both actors acquit themselves reasonably well, but this dual approach leaves the audience in a weird place: the second they accept one actor as their character, they’re left to try to make sense of the other. This sort of stuntcasting is an all-or-nothing gambit: either commit to the bit or don’t.

A third option, of course, would be the approach Steven Spielberg took to the faulty shark in Jaws: push Lucy and Desi to the periphery, and instead focus on the mortals in their orbit. This probably would have been a smart move for Sorkin, as his talents seem much better suited to the wiseguys in the writing room than they do to the headliners. Former Bluths Shawkat and Hale relish the opportunity to sink their teeth into Sorkin’s screwball dialogue; both are naturally inclined toward old-timey delivery, and bat one-liners back and forth like ping-pong balls (Lacy seems to mostly be present for his co-stars to score points off of, but this is a necessary role in a Sorkin script). Arianda and Simmons, meanwhile, do a much better job at inhabiting their roles than the headliners, given the freedom inherent in playing less well-known figures. Simmons, in particular, is a highlight, playing ex-vaudevillian Frawley with authentic Catskills timing. Simmons and Arianda are so good here, in fact, that I kind of wish they were the leads– though I suppose a film called Being the Mertzes wouldn’t sell as many tickets. 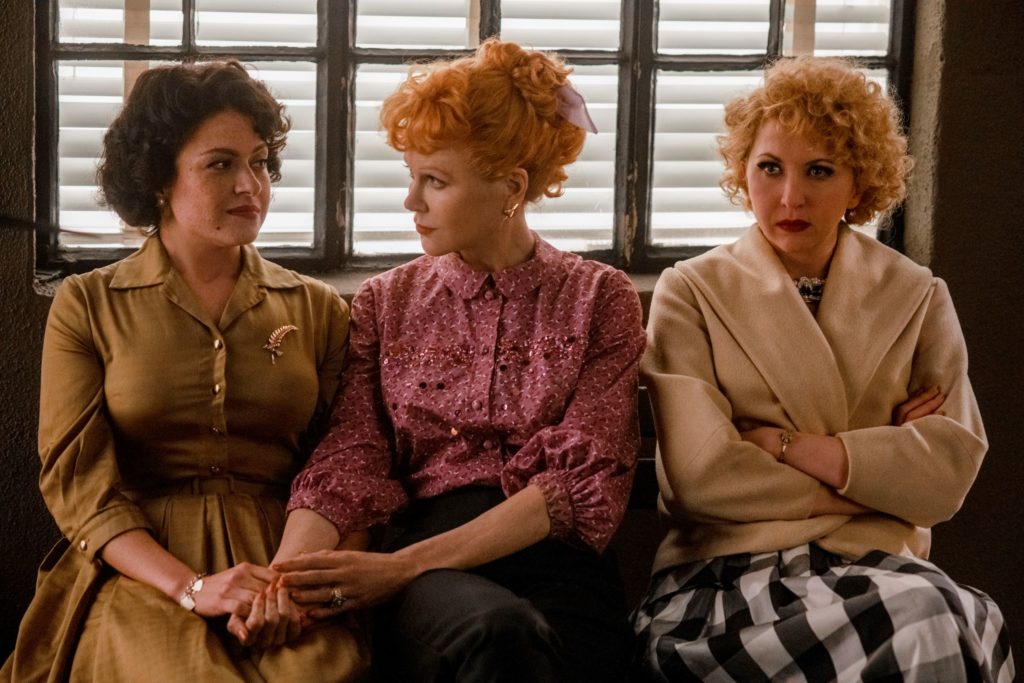 But there is an exchange later on in the film which tells me the project may have been doomed from the start. In a heart-to-heart, Shawkat’s Madelyn Pugh tells Ball that she’s been working to write her character smarter, complaining that her current portrayal runs the risk of infantilization (“Your catchphrase is literally ‘Waaah!’”). When Lucille protests that it works for Lou Costello and Stan Laurel, Madelyn spits, “Yes, and it makes me sick to watch those grown men act like five-year-olds!” I don’t know much about the real Madelyn Pugh (her memoir, Laughing with Lucy, has been described as amiable and un-dishy), but this strikes me as a particularly modern point of view, injected as one of Sorkin’s trademark bits of editorialization. For one thing, it seems borne of surface-level feminism, a wildly successful male writer’s idea of what an embattled female writer might think (perhaps tellingly, Frawley’s lament that “Nothing hurts a man like the first time a girl calls him old” gets a much heavier dramatic beat). But, more damningly, it speaks to a shallow view of comedy: the impulse to applaud a righteous “joke” rather than laugh, the Twitter-brained idea that one’s taste in comedy is first and foremost a political statement. Sorkin’s work is often very funny, but his sense of humor is clever-clever, and always in service of a “point.” Watching Being the Ricardos, I got the impression that slapstick comedy is as foreign to him as the alien language in Arrival.

This scene is not just an insult to Laurel and Costello, but, by extension, to Ball herself. Sorkin clearly has a great deal of respect for Lucille Ball as a businesswoman, as a creative perfectionist, and as a wit, but he seems to have little use for her as a comedian. Indeed, the entire thrust of this scene is that Ball was debasing herself by plying the very talents that made her one of the most beloved and influential entertainers of the twentieth century (this is apparently confirmed by a recent interview with Sorkin, in which he dismisses I Love Lucy as “not a show that if we took a fresh look at today, we’d think was funny”). The attitude of Being the Ricardos is one of respect, but not of appreciation, which is as fatal a flaw as one could possibly bring to a biography of a comedian whose appeal was as gut-level as Ball’s. I don’t know if one needs to be a comedian to tell a comedian’s story, but it would help to at least like comedy.

Minute to minute, Being the Ricardos is enjoyable enough as entertainment; it pings and whizzes and hits all the familiar Sorkin pleasure centers, right up to the predictably rousing ending (which I won’t spoil, but suffice to say curdles after even a modicum of critical political analysis). However, its relationship with its subject matter feels cold. Sorkin’s protagonists, from Mark Zuckerberg to Abbie Hoffman, tend to be historical figures who represent something, animated through dialogue into a sort of political cartoon writ large. His miscalculation here is in selecting a subject who viewers don’t view as an abstraction, but as a friend. To tell the story of Lucille Ball, one needs to respect not just her craft, but her art, and Being the Ricardos doesn’t seem to comprehend what makes her funny. The problem, ultimately, is that Sorkin simply doesn’t love Lucy– and she deserves a biographer who does.