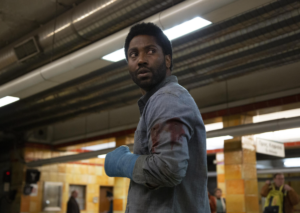 With the Delta variant on the rise and the increase in the risk of traveling, escapism is becoming more attractive than ever. Netflix’s Beckett swiftly supplies this escapism, with its engaging, fast-paced narrative and its eclectic Greek landscapes. The film follows the titular character—played by Tenant‘s John David Washington—who goes on the run after he gets in a car accident that kills his girlfriend, April (Alicia Vikander).

Greece is in a violent political uproar, and tensions are high after Karras, a liberal politician, is devastated after the kidnapping of his son. After the car accident—in which Beckett insists he saw a little boy, though the local police deny it—he returns to the scene, only to be chased and viciously shot at. Beckett goes on the run with corrupt officials hot on his tail.

Along the way, he receives help from various Greek civilians and activists. He arrives at the American Embassy in Athens, where he is relieved to get help from U.S. official Steven Tynan (Narcos‘ Boyd Holbrook). Beckett’s relief is short-lived when Tynan turns on him and joins in on the manhunt to take him down.

Beckett is a film we’ve seen before, with healthy doses of flicks like The Bourne Supremacy and Minority Report interwoven throughout. Despite this, it remains thrilling and at times unnerving; the film’s director, Ferdinando Cito Filomarino, does this with stealth. By justly critiquing Americentrism, Filomarino isolates his audience to feel as nervous as Beckett does.

The film’s commentary on Americentrism is jarring and well-placed. We are put in Beckett’s position of cluelessness, of naiveté; as a typical American audience, we sink right into Beckett’s shoes as a vacationing American tourist with little to no knowledge of Greece, its language, or its politics. When any Greek character speaks their native language, we are not given subtitles or even a hint of what they are saying through body language nor translation. This was a notably clever choice on Filomarino’s part; it left me feeling stumped and on edge, and I found myself asking the same questions aloud that Beckett was. 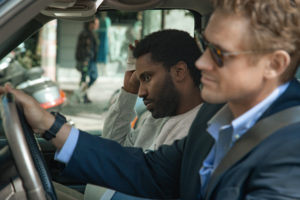 This critique of Americentrism was a significant factor in Holbrook’s character. Tynan is an All-American, blonde, blue-eyed, corrupt wolf in sheep’s clothing that lacks any knowledge of the Greek language, as well as respect for its people, even though he works and lives in Athens. Holbrook—despite his successfully heroic roles in previous Netflix material like Narcos—excels as a villain here, with hints of his performance in Logan bleeding through with his southern drawl and smugness.

Beckett is not without flaw, however; the film’s script would have benefitted from further editing and tightening of characters, as well as a lengthened runtime.

Regardless of Holbrook’s skillfully nefarious performance, there wasn’t any explanation on Tynan’s motives or who he was working for and with. Was he working with the corrupt police from the beginning of the film? Was he a communist? Was he a far-right extremist for Sunrise (the cinematic parallel to Greece’s ultranationalist party, Golden Dawn) who wanted Karras’ death?

We are never given more explanation other than he wanted Beckett silenced. If the script had been longer, Tynan as a character could have been better explored and flushed out; with an actor like Holbrook at their disposal, the scriptwriters missed out.

The opening of Beckett left a lot to be desired. We are immediately thrown into April and Beckett’s relationship, without preamble, and without much explanation that would have been advantageous to building an emotional connection with them.

I wanted to know more—who are they, how long have they been together? What is their life like before the film? April dies twelve minutes in—why should I feel connected to their relationship when we don’t get a chance to know them as a couple?

Despite the film’s flaws, Filomarino has created a solid, intensely effective political thriller. With a raw cast and unnerving storyline, Beckett analyzes the way American audiences look at not only themselves but their relationships and knowledge of other nations and their politics.