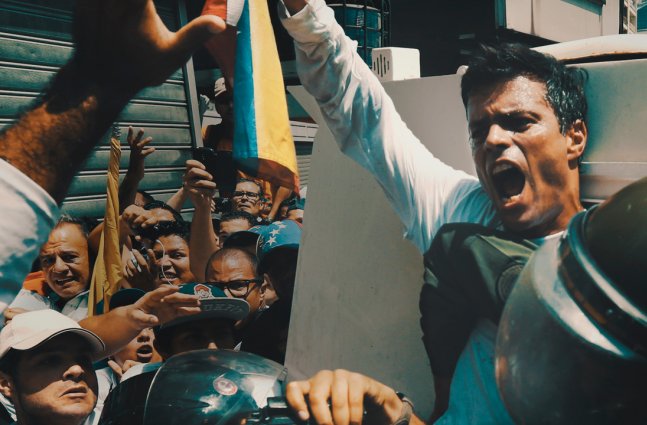 “Left vs. right isn’t at the center of this issue. It is authoritarianism vs. democracy.” This description from Ricardo Hausmann, a Harvard University economics professor, that’s paired with images grouping the regime of Venezuelan president Nicolás Maduro with global far-right demagogues like Rodrigo Duterte, is an apt summary of A La Calle. It’s simply in favor of free and fair democratic governance– an understandable bias.

During the presidency of the communist Hugo Chávez (1999-2013), the Venezuelan economy reached new heights; his presidency, and the economy he led, was one of the most prominent examples of Leftist success during the 21st century. That is, according to the traditional narrative; A La Calle complicates this a bit. Following his death, Maduro took over the reins and the economic success quickly evaporated as global oil prices fluctuated. The Venezuelan boom, as posited by the filmmakers, was nothing more than lucky timing on the part of the global oil industry. To maintain his hold on power, Maduro imprisons political opponents, and isn’t bashful in implementing a police state and fixing elections. His unconstitutionally elected Supreme Tribunal even overrode the National Assembly to retain his presidency and inaugurated a constitutional crisis.

In the United States’ Great Depression, GDP fell by 29.8%, according to one of the experts in the documentary. By contrast, Venezuela’s fell by 45%. Directors Nelson G. Navarrete and Maxx Caicedo mostly rely on the firsthand experiences of the proletariat to demonstrate the crushing impact of this economic free-fall. In one of the most touching moments, they record a chant joined by a chorus of hundreds: “I don’t have water. I don’t have electricity. President Maduro, put yourself in our shoes.”

Navarrete and Caicedo optimize firsthand accounts, social scientific commentary, and creative graphics to convincingly condemn the leadership of Maduro for leading the Venezuelan government into collapse and trapping its people in poverty. The most fundamentally human story is that of Randal, a waste collector and barber. He struggles to feed his family, his wife can’t find work, and he receives just a measly three hours a day from one of his jobs.

Perhaps Randal’s story is the most touching of the major characters since many of the rest come from more privileged positions. Federica is an aspiring doctor, who has mostly been affected only in a secondary way by Maduro’s presidency. Opposing politician and activist Leopoldo López and his wife Lilian Tintori, though clearly endangered by Maduro’s presidency (Leopoldo is imprisoned for inciting violence), nevertheless also come from a more bourgeois place than the protestors who lack basic utilities. “Seventy-five percent of the country’s population has lost an average of 19 pounds of bodyweight between 2015 and 2016 due to food shortages throughout the country,” according to Vox.com. Had a few more voices been lifted from the financial floor of Venezuela— a few more hungry bodies from the proletariat—the suffering behind the narrative could only have been reinforced. We meet a few of these Venezuelans, don’t get me wrong, they just lack the screen time given to wealthier players.

But López is a socialist, like Maduro. He’s just more adamant that socialism is compatible with democracy. His newest political party, Voluntad Popular, is even a member of Socialist International. As stated previously, “Left vs. right isn’t at the center of this issue. It is authoritarianism vs democracy.” The filmmakers, who obviously oppose Maduro, even make use of Leftist imagery and symbolism, such as red fists and the film’s title, A La Calle, which translates to “To the Street.” This manages to leave a residue of hope: Leftism didn’t fail Venezuela, a dictator did. And HBO Max seems well attuned to the democratic vs authoritarian posturing, seeing as they’re releasing it on Sept. 15, the International Day of Democracy.

A La Calle will be available for streaming on HBO Max on September 15.