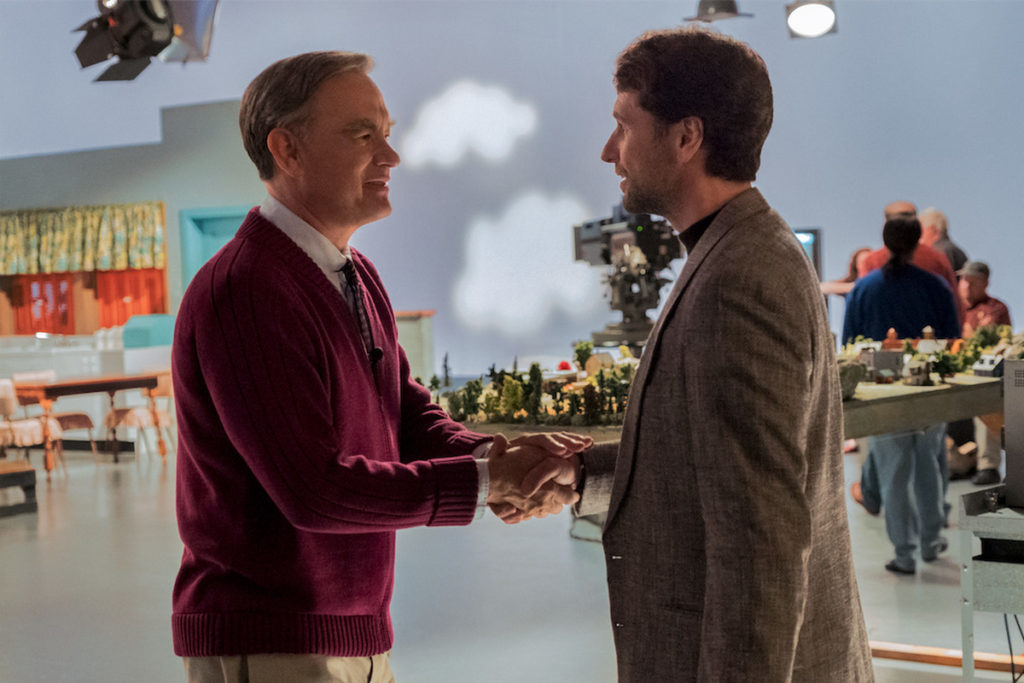 Everyone, it seems, is desperate for kindness to return to our society in the form of Mr. Rogers. Fred Rogers was a comforting presence in the lives of millions through his long-running TV show Mr. Rogers’ Neighborhood, and in many ways his calm guidance and beliefs (be kind, treat children like people, etc.) feel like they died with him. Though this simplistic sentiment is the driving force behind the advertising for Marielle Heller’s A Beautiful Day in the Neighborhood, the film is fortunately far more complex and interesting. Mr. Rogers, though played phenomenally by the similarly legendary Tom Hanks, is not the protagonist of this story. Instead, Heller has crafted a narrative about a man grappling with how his rage, fear, and cynicism have negatively impacted his life, and how he learns to change that with some encouragement from Mr. Rogers. That makes it sound like Mr. Rogers appears on Matthew Rhys’ shoulder to tell him what to feel, but Heller’s directorial flairs keep the film from being a paint-by-numbers inspirational story with a saintly Mr. Rogers at the center.

Casting Tom Hanks, the nicest man in Hollywood, as Mr. Rogers, the nicest man to ever live, seemed too easy. Fortunately, Marielle Heller doesn’t just point the camera at Hanks and say “Go.” As in her excellent previous film, Can You Ever Forgive Me?, Heller keeps Neighborhood small and intimate. Matthew Rhys’ Lloyd Vogel, a fictionalized journalist, is our protagonist. Like Melissa McCarthy’s Oscar-nominated role as Lee Israel in Can You Ever Forgive Me?, Vogel is an unhappy person. Though he has his loving wife Andrea (Susan Kelechi Watson) and newborn baby, he is a combative journalist who antagonizes his sources and has unresolved issues with his estranged father (Chris Cooper, great as always) that haunt his daily life. After a physical altercation with his father at his sister’s wedding, Vogel’s editor (Christine Lahti) assigns him a fluff piece on– who else– Mr. Fred Rogers.

Naturally, Vogel initially scoffs at this assignment, as I did at the film itself. As a child, I did not trust Mr. Rogers’ puppets because, unlike the Muppets, their mouths did not move when they spoke. I liked Mr. Rogers well enough, but he passed away when I was in grade school and my attention was focused on the Arthur cartoon. Thus, the lead up to this film venerating Fred Rogers sort of put me off, but I’m glad I gave Neighborhood a chance. Hanks’ portrayal of Rogers is not a one-to-one impression, nor should it be. He infuses the role with the same disarming kindness and attention that Rogers radiated on his show, catching Vogel– and myself– totally off guard. Vogel finds himself grappling with his emotions, even when Rogers isn’t around. This is the power of Rogers’ kindness and a listening ear. 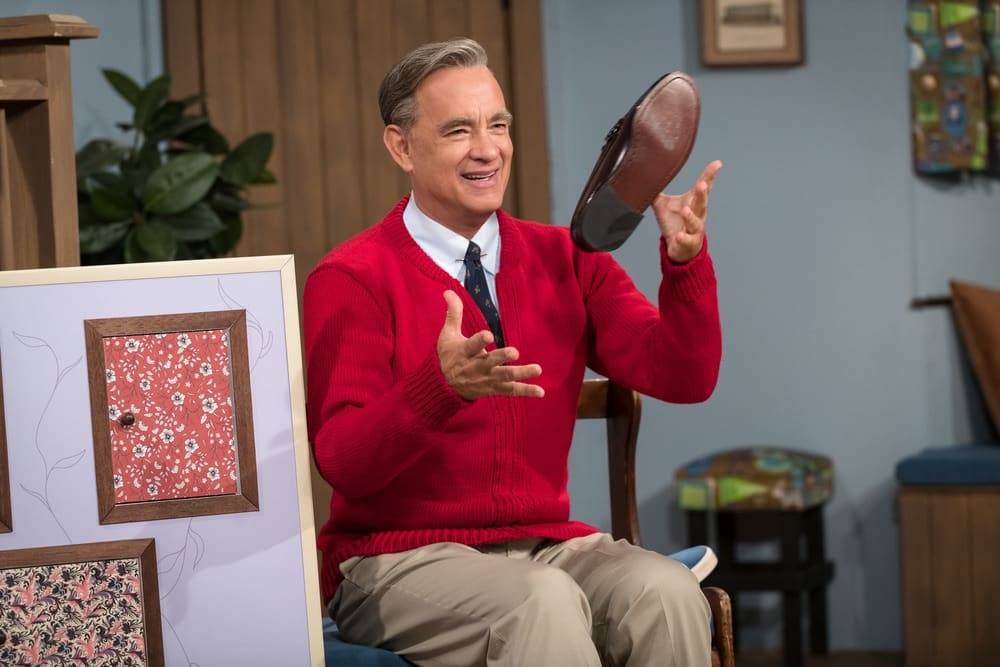 The film is framed as an episode of Mr. Rogers’ Neighborhood, square aspect ratio and all. Transitions are represented by miniatures of New York City, Pittsburgh, airports, and bus stations. One dream sequence has Vogel imagining his family in the roles of characters on the show, which gives us the incredible image of Chris Cooper dressed as Mr. McFeely. These thoughtful touches keep the film interesting even in its quieter moments. Matthew Rhys spent six years perfecting his American accent and crying abilities in FX’s The Americans, so he’s perfectly cast as a man bottling all his rage right under the surface. Susan Kelechi Watson manages to elevate the “wife” role to a fully-fleshed out person who wants to support Vogel, but is growing weary. Chris Cooper effortlessly plays a dirtbag father, forcing you to sympathize with him despite all warning signs. I wouldn’t be surprised to see Tom Hanks nominated for Best Supporting Actor for his work as Mr. Rogers. Heller withholds him just enough to make every scene he’s in feel like a gift.

Rogers’ widow Joanne says she hates the term “living saint,” because it makes Fred’s level of empathy seem unattainable. In many ways, it is. However, no one needs to be at Mr. Rogers’ level at all times. We can just try a bit harder, like Vogel does in this film. I’m sure A Beautiful Day in the Neighborhood would be interesting to view as a companion piece to last year’s documentary Won’t You Be My Neighbor?, which I have not seen for the myriad reasons I listed above. After this excellent film, I’m willing to give it a chance.

A Beautiful Day in the Neighborhood
2019
Dir. Marielle Heller
107 min