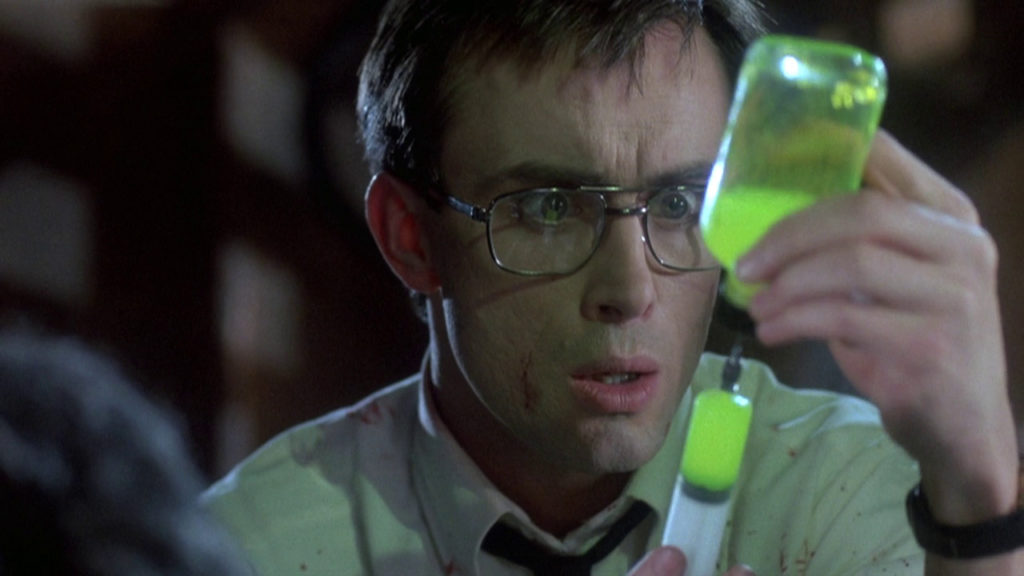 H.P. Lovecraft’s stories have been adapted in a variety of ways. His novella, Herbert West-Reanimator, takes the spotlight in Stuart Gordon’s debut film, Re-Animator. Gordon’s history is in theatre, which is clear to see throughout the film. The film goes over the top in several ways to elevate it above just a typical gore-fest. It has excellent humor, amazing performances (particularly Jeffrey Combs), and great special effects. Having seen the film several times, I still laugh hysterically from beginning to end. It’s a sci-fi horror movie that never ceases to engage me. The opening credits (complete with the Psycho-like backing track) hook you right away with their slick colors and designs. Stuart Gordon’s execution is inspiring in terms of visuals, as well as his unique stamp on Lovecraft’s story, which many consider to be one of the finest adaptations of the author’s work to date.

Jeffrey Combs is the big reason (among others) why this movie is cemented into my mind forever. His performance as Herbert West, the mad scientist conducting experiments to bring back the dead, is wild. As a simple character, he’s a closed minded individual only interested in achieving his goals, paying no attention to the chaos that he creates. He is always very determined to succeed. When he and Dan Cain (Bruce Abbott) break into the morgue to get a “fresh corpse” to test West’s serum on, it all goes horribly wrong. Things get way out of hand, a character dies, and yet West is still excited to try his work on a fresher corpse. He has that “just do it” mentality that makes you appreciate what kind of person he is. He’s doing insane work, but at least he never gives up. If we all had the determination of Herbert West, we would get a lot more done in this world. 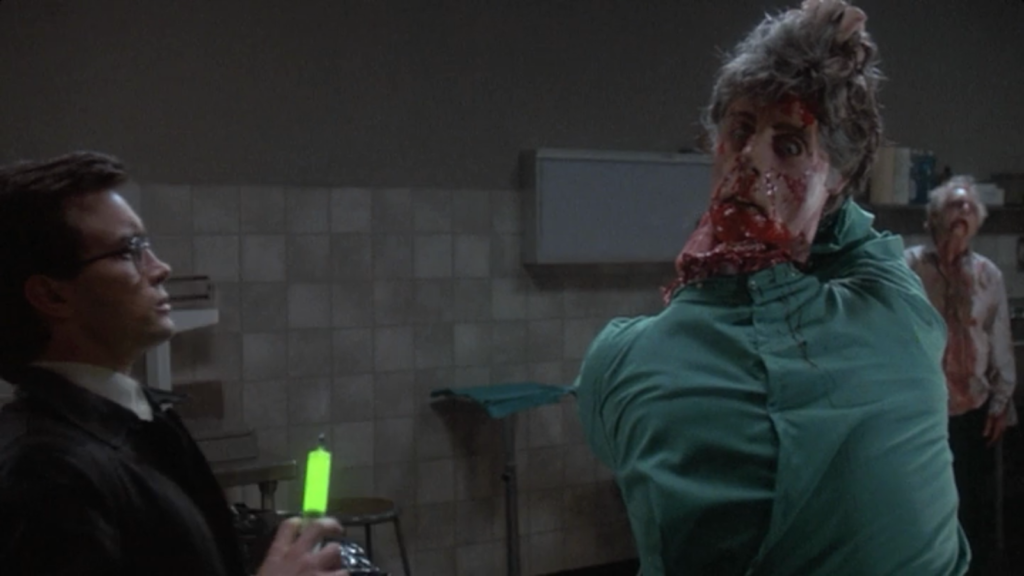 The other best aspect of the film is the special effects. John Naulin, the man responsible for all the amazing blood and gore in the film, had previously used only two buckets of blood in each film he’d done. Re-Animator forced him to use about 24 buckets. This film is disgusting in the best way. Sometimes, the makeup isn’t great, particularly the nude muscular man in the morgue. Those cheap parts are charming to me. The dead cat, which is clearly some weird puppet they put together, looks bad, and I love it. However, when people’s eyes explode, or Dr. Hill’s decapitated head is in use, it looks sick. You can’t help but appreciate the love and work that went into the movie. Every time the gore is shown, it sticks with you. It is really disgusting sometimes. The over-the-top performances of the actors, along with ridiculous gore, make the film work. The “how far can we go” mentality is at play. Gordon and company keep pushing themselves to deliver the humor, excite the audience members who crave the bloody scenes, and forever entertain various fans of science fiction, comedy, and horror.

I’ve never considered this film a horror movie, mostly because there’s nothing genuinely scary about it. It has horror elements to it, but there aren’t many scares, if any at all. With that said, this is one of the best from the time when people were trying to outdo each other to get another Evil Dead-style hit for their studio. When you take out all the blood, there’s still great characters, excellent performances, and a simple story done well. It’s a fast paced movie, but it knows when to hit each point with as much blood and grace as they can muster. To not love Re-Animator is difficult– thanks largely Jeffery Combs’s performance.