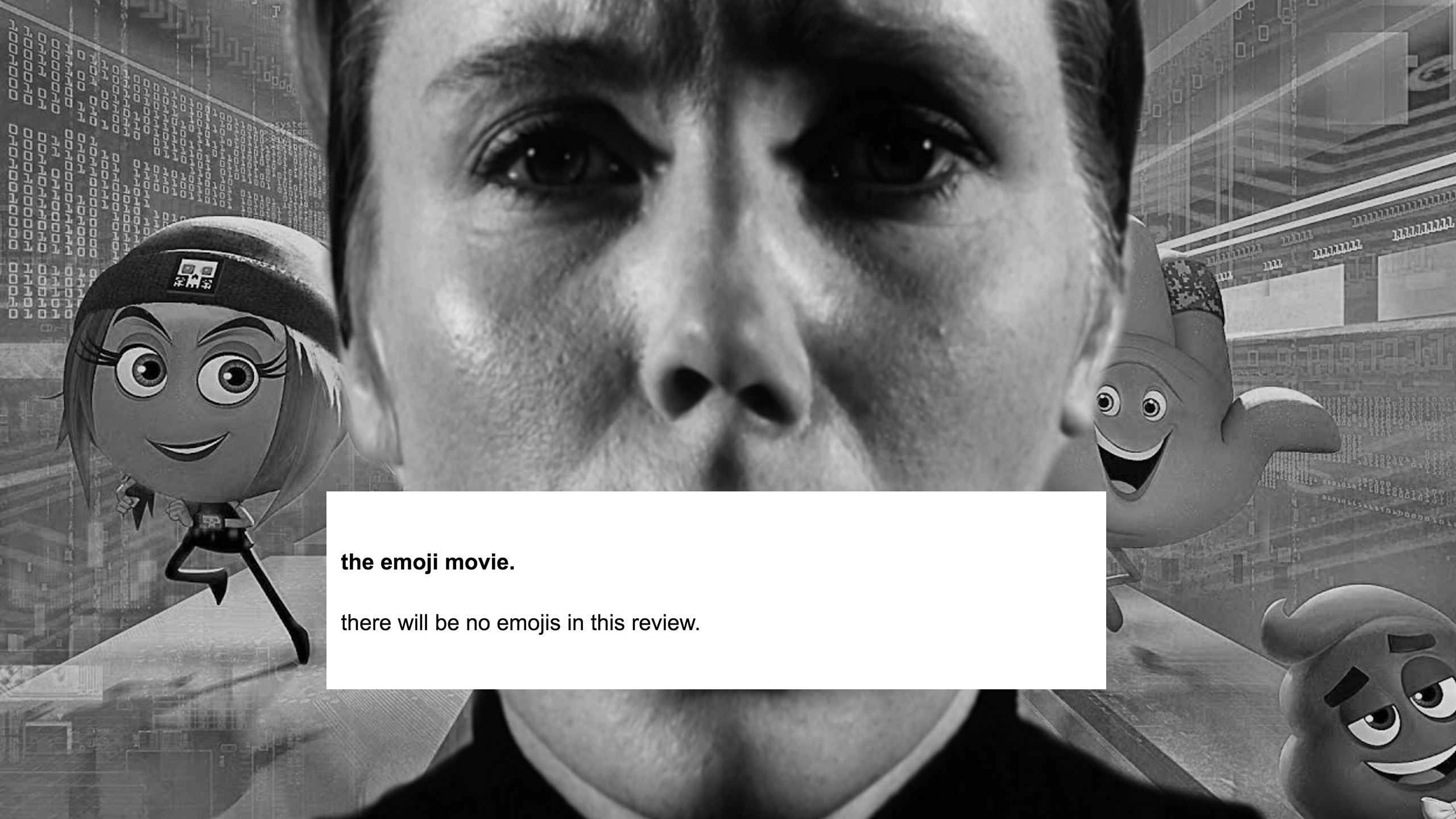 PLEASE NOTE: This review is unofficially sponsored by the official constituents of The Emoji Movie: Dropbox, Ubisoft, and the creators of WeChat, everyone’s favorite international communication system available for smartphones across the world. The Promo Pals are not endorsed by any of these products – we are just obligated to mention them because they are integral to the film at hand.

The Promo Pals weren’t supposed to see this movie. This was the case up until 15 hours ago. The story starts as follows… 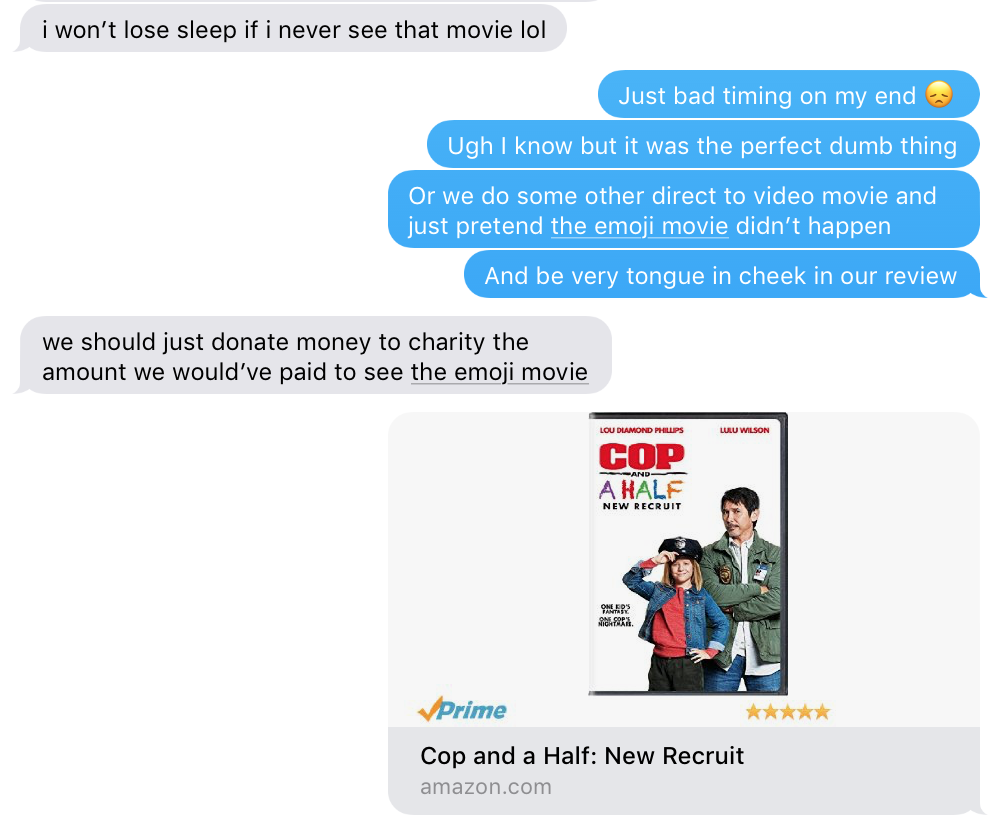 Andy was meant to be away this weekend, meaning the review would get further away from the film’s release date and probably lose relevance by the time the Pals got around to doing it. It was early Friday morning that the Pals decided to skip a viewing of The Emoji Movie in favor of donating money to their favorite charity, The Institute of Noetic Sciences, and watching the much-anticipated Cop and a Half: New Recruit instead. But then Hell froze over.
The train system in Boston backfired, people were too high to drive, and the world came crumbling down. Andy missed a train to Maine and Logan was just settling in to finally watch all of Neon Genesis Evangelion, both of them feeling pretty good until…

Alright, losers. You came this far so you’re probably expecting something pretty good. What can we say, though? What could we possibly offer you that isn’t already promoted in a movie that is essentially an hour and a half long commercial.

We could host some pretty cool files on Dropbox, or play a couple rounds of Just Dance on our phones! But I think we have what you’re all looking for right the fuck here: 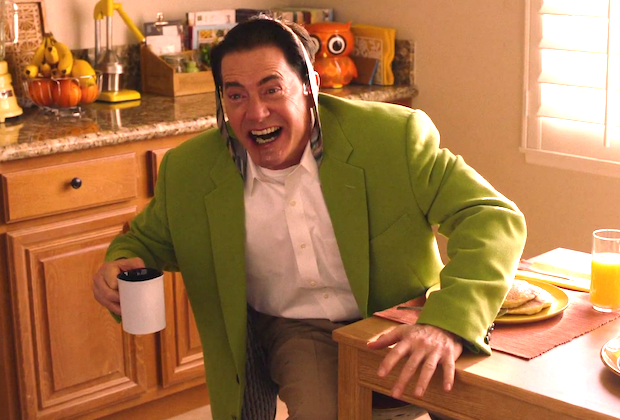 Dougie. What you get is Dougie – the last pure vestige of a dying world.

Logan: I feel sickly having paid to see this movie. Not because it is the worst film I have ever seen — not by a long shot, actually — but for what this film represents and how I’ve played into its hand. When I was in high school I used to torrent everything. Now I realize that, as a viewer, if I want to see better work, I need to put my money where my mouth is and give to the artists and the movies I think are changing our culture for the better. But The Emoji Movie is a cultural low-point, and I wish I had found a cam-rip instead.

Andy: I feel ashamed to have purchased a ticket to this movie. In fact, this Friday, I was desperately combing the internet for the buckaroo who might have swung a camrip into the virtual stratosphere for us to enjoy, but, alas, my search offered naught. I took solace in the fact that I was going to be away and that I’d transcend the idea of this film entirely through literal escapism from one geographic locale to the next… Yet the Fates intervened. Here we are talking about a movie so mundane, so toxic, and so unoriginal that it pulled me from a literal high and made me want to toss my lunch. (An Applebee’s order of Mozzarella Sticks to-go. My usual).

Logan: I literally don’t even like joking about this movie. While Boss Baby and Storks (previous Promo Pals kids-fare) were problematic in their own right and supported misguided ideologies, it still felt like they had plenty of redeeming qualities. But this movie is just a fucking advertisement dressed in the gossamer of children’s entertainment. The plot is wholesale ripped off from The Lego Movie and Wreck-It Ralph, and it seems more effort went into its creation as a soulless tool to propagate the hegemony and have people download Just Dance, WeChat, and DropBox than anything else. But honestly, what was I expecting from The Emoji Movie? Everyone went into this movie expecting it to be shit and — surprise!!! — it was. But still, the lack of effort, the lack of understanding, the lack of thematic cohesion on any front, is appalling.

Andy: It was just sad. I wanted this to be one of those so impossibly bad movies that perhaps there’s some redeeming quality in the ironic sense, but there isn’t any of it. This is a soulless piece of shit that had to have been written in one night. If the writers of this film take pride in anything, they should just come out and be like, “Oh yeah, sorry, we were drunk and high when we wrote that in one night, sorry.” But I don’t know, this just feels so wrong and depressing. It’s like this fucking movie just ignored the messages coming from kids movies/the entertainment coming out of surprise romps like Trolls to give us something bland and unappealing, something which literally hocks products and sells James Corden like he’s a generic toilet bowl cleaner. (I’m admittedly not a huge fan of Corden, but this movie will make you hate him indefinitely. I seriously thought his accent was fake and that he was just doing a Stewie Griffin impression for 40 minutes of this abomination.)

Logan: Every joke and idea was also obviously just dreamed up by Baby Boomer or older Gen X executives at Sony who are literally just idiots. The same people who sent these emails about the atrocious Amazing Spider-Man movies (see: leaked Sony emails below). You might not find it surprising reading these to learn that “NBD” is uttered in The Emoji Movie. 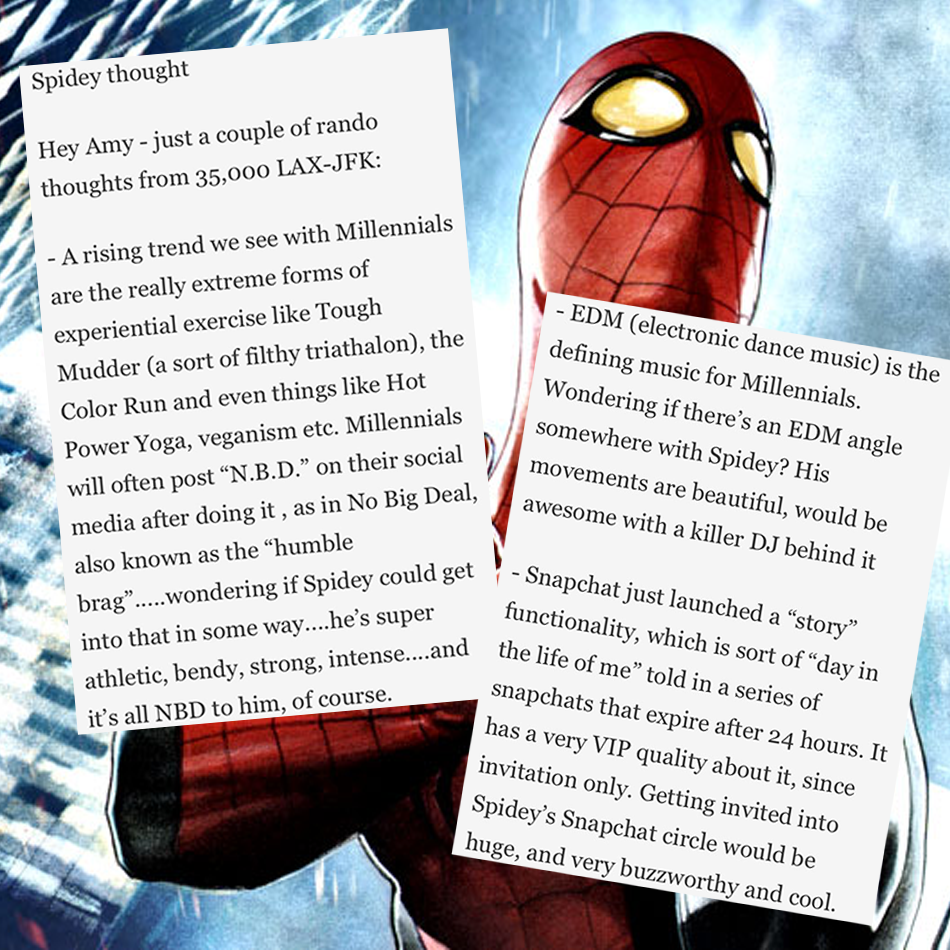 Anyways, I guess I’m just wheel-spinning on how much this all sucks. The only way I see forward is to present a somewhat normal review. And so, here’s the setup of The Emoji Movie:

THE EMOJI MOVIE takes place in the fast and busy world of TEXTOPOLIS! In Textopolis, emojis are given life, much like the toys in the Toy Story movies. However, the emojis are not given autonomy — instead they live by the finger of a child — Andy or Tony or something. When called upon by their God, the emojis must enter their ‘cube’ and perform their one defined emotion. Compliance equals success and those who do their duty (Heh, duty — Sorry. Normally I wouldn’t stoop to that joke, but it’s an allusion to the poop emoji character in the movie who only makes poop puns) are rewarded with a VIP lounge. BUT: One emoji, Gene Meh or Some Shit Like That, voiced by chaotic evil cultural force TJ Miller, has many emotions! And as such, DOESN’T FIT IN. Sounds like an arc about individuality and self-actualization is afoot!

Andy: This movie is just so fucking out of touch with the actual content it handles. The apps it showcases are wrong-– looking at the Just Dance sequence that is complete and utter garbage– and the level this movie goes to in pushing product and norms (but not Norm of the North) is disgusting. For example, there is a romantic subplot involving Gene and Wyldstyle– I mean Jailbreak– wherein we learn that she is a Princess Emoji turned hacker. This prompts TJ Miller to spout the words of every beta male in America calling her his “Princess” and moaning about how their “Fairy Tale” must come true. She denies him at first (which feels pretty good) but then he becomes a true Meh Emoji, thus propelling us into the third act of the film. The third act is literally informed by how much this movie wants us to believe that denying a peppy manchild protagonist makes Jailbreak a bad person. At this point, it was pretty clear why the character lost its original actor, Ilana Glazer, and had to have Anna Faris step in.

Logan: God. Fuck this fucking garbage movie. I feel like I can’t even pretend to have something to say about it anymore. The Emoji Movie doesn’t even deserve the ironic memefication our generation might be tempted to give it, á la Bee Movie. It deserves to be fucking burned. The only good thing that might come about the existence of this movie is that it is so far beyond the pale in terms of late capitalistic propaganda that it might actually awaken people to the stupidity of modern society and radicalize people toward the left.

Andy: I don’t want to say this, but I’ll actually threaten people who try to make this movie into anything more than it is, á la Bee Movie memes. You fucking do that shit, you’re dead to me on the spot. This movie doesn’t fuck around, okay? It’s garbage.

Andy: Please care for each other and take care of yourself. This movie is a dangerous attack on everyone’s intelligence and is a cultural nightmare we have to grapple with and move forward from. Remember, there are still great films out there, and there are still people who want to do something with the craft to please both you and themselves beyond studio-produced abominations like this. This movie hurts, and I think it might have killed my friend and their spirit. Damn you, The Emoji Movie, and damn you, TJ Miller! (Also this movie feels like Sausage Party for kids.)

Logan: Don’t see this movie. If you have seen this movie pay for your sin. I donated 25 dollars to Covenant House, which helps shelter homeless children. This is a small gesture, but something we should all do more often than pay to see something like The Emoji Movie.

Now playing… go find it yourself. You’ve been warned.