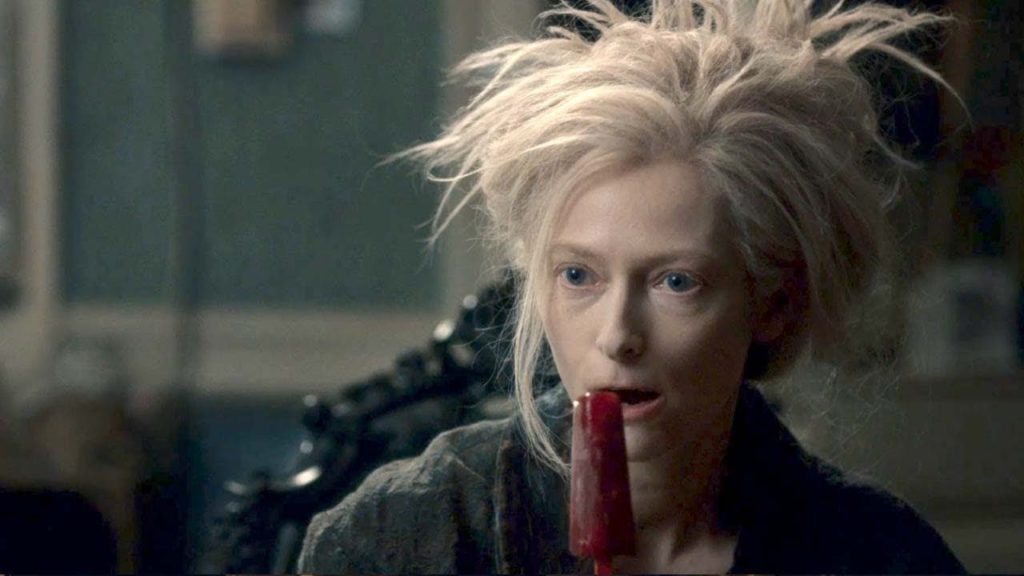 My first article on Boston Hassle was about Dead Man (1995), directed by Jim Jarmusch. His movies are always a delight to watch, and I hope some of you went out to see the Dead Man this past August at the Brattle Theatre. Now, I find myself writing about Jarmusch again, and my appreciation for him keeps getting stronger with each movie I either rewatch or watch for the first time. Only Lovers Left Alive is a standout in his career, as it is one of the most visually stunning films he’s made, with outstanding performances from Tom Hiddleston and Tilda Swinton. There’s always something to admire on screen, or a situation you can connect to.

The story follows Adam (Hiddleston), a musician vampire who lives in solitude making music in present day Detroit, is at a crisis in his life; he is an artist struggling to create after centuries of influencing other great minds. His lover, Eve (Swinton), who lives in Tangier, comes to see him in his time of need to raise his spirits. Jarmusch finds a great balance between storytelling and providing excellent cinematography to create pathos. The story of both characters is easily recognizable to anyone trying to create something during their life or to make some sort of impact on the world. It’s a tale about trying to find happiness in that life. Adam is constantly questioning his talent, even though he has plenty of people who love his music. How could one not connect to Adam’s situation? During his lifetime, he says he has inspired people like Nikola Tesla to create extraordinary works. In my opinion, it’s important for any artist to influence others while also creating work that they are passionate about as well. Adam is the influence for many, but when he wants to create, he blocks himself off from being happy with himself. It’s sad to watch, because it takes many people some time to create a simple story. For someone like Adam, who has lived for centuries, it is still not easy for him to construct something he is proud of. This is a heartbreaking revelation in the movie early on, and it leaves you feeling almost helpless. The work that you do hear from him is very good, so you obviously root for him. He isn’t some self-deprecating character that you cannot relate to. Many can, and that’s one of the best parts about the film. His opposite is Eve. Swinton plays her character so well, as usual, that it’s impossible not to smile when she marvels at the little things in the world. Unlike her partner, she takes in all that the world has to offer. When she and Adam drive through the night life of Detroit’s abandoned environments, she is still in awe that, at some point, there was life and creation. For instance, the two of them are in the abandoned Michigan Theater. Though it is in very poor shape, you can tell that she is in love with the history that the place offers. It’s clear that Eve is a lover of knowledge, art, creation, and the world itself. The two of them beg the question: can someone combine the two to be content with the life they are living and content with what they are achieving? As someone who struggles every day trying to find the motivation to do work, but finds the beauty in a lot of experiences, this movie made me think a lot about myself. Luckily, the movie also entertained the hell out of me, along with me feeling somewhat melancholy. It’s also worth noting that John Hurt, Mia Wasikowska, and Anthon Yelchin turn in great performances as well.

This movie is also gorgeous to look at. The homes of both characters are visual novels, in a way. When you first see how cluttered their homes are with possessions that they hold dear, it adds to their character. Eve wants knowledge and art, so she surrounds herself with books in various languages, nice furniture, and she lives in an area that she finds herself falling in love with each time she explores. Adam’s a non-stop working artist, and his home shows it. It’s in the middle of nowhere, it is cluttered (a sign of a great artist), instruments are found in different rooms, a home recording studio, and more. It’s clear where Adam’s heart lies, thought it may not always show that he wants to continue with that work. The film has excellent scenes that boast the visual storytelling Jarmusch is well-known for, like the very opening of the film. At moments, I found myself getting lost in the beauty that he captured from the landscape of Detroit to the narrow alleyways in Tangier. The audience is just like Eve in this way. We are all taking in the beauty of life develop on film right before our eyes, and we love every second of it. We awe at how well it is presented, and we want more. Only Lovers Left Alive left me thinking a lot about what I want to do with my life. Do I want to be a dark character like Adam, constantly denying myself that it’s always worth it to create, or do I want to marvel at everything that has and will be created like Eve? Why can’t I be both? It’s an important question that the film brings up, and it will leave any artist watching it with the feeling that they should never stop, no matter what they may think. Think about; if Jarmusch didn’t create his films, the cinematic world would miss out on excellent pieces of work. This is a beautiful film that will challenge you.