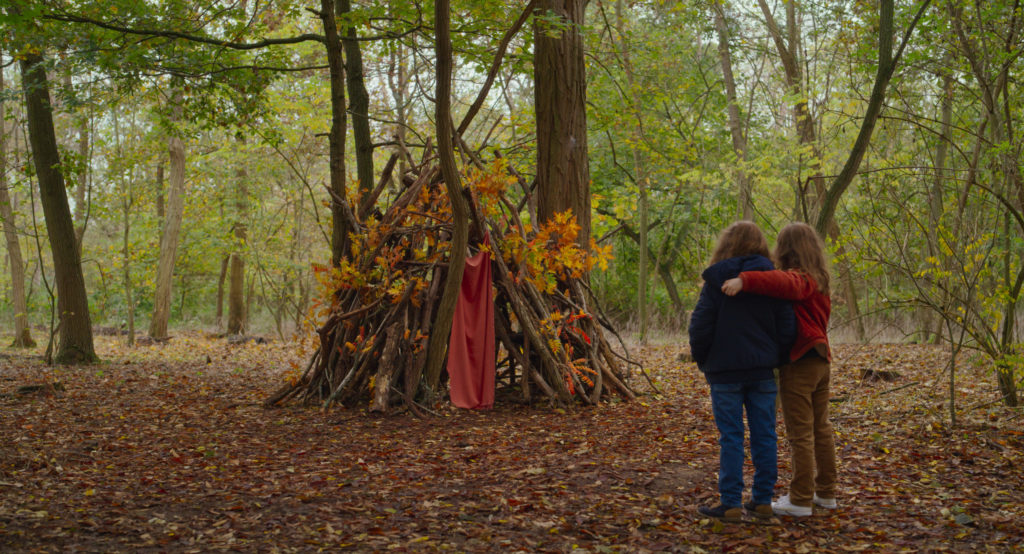 Céline Sciamma’s newest film, Petite Maman, is a perfect little morsel, reflecting on a daughter’s relationship to her parents and the many ways we never get to have perfect goodbyes with those we love. Sparse and economical in all aspects of its filmmaking, the movie likewise makes no pains to cover up any subtext. All is clear in Petite Maman, but that doesn’t necessarily mean that all is understood.

Taking place after her maternal grandmother’s death, the movie follows 8-year-old Nelly at the house her mother grew up in, as her mother and father attempt to pack up and clean the house for new occupants. Nelly passes the time with old books and toys or with asking her parents questions, until one day she wanders into the forest and meets a young girl her own age. This little girl is more than meets the eye though, leading Nelly on a meditative journey through space and time.

It is a particularly quiet movie, with many of its most intimate scenes mere looks or touches. Sciamma offers nothing but even compositions, so cleanly crafted, throughout the movie. Little details of story and character do punctuate at times, like spots of groundwater slowly coming to the surface. Yet, despite being so simply and tightly constructed and so clean and clear in its intentions, the movie is rather unsentimental in what it offers by way of conclusion for the audience. It’s not so much that any answers are given, more like complex shades and tones of a feeling or feelings are expressed.

It’s really a rather deceptively simple movie, one that might be swept aside as slight if one approaches it too cynically. Even in its most potentially trite scene, I found something more like Sciamma dropping pretenses. She seems to be guiding the viewer to do just that, to drop any pretenses and look at the movie directly and understand it as a movie about a child told through the eyes of a child. This charming forthrightness to Sciamma’s filmmaking and screenplay in Petite Maman belies the complexity of emotion that the movie inspires. And although rather tightly constructed, Petite Maman counterintuitively cracks something open, revealing deep wells of water and crashing waves just beneath the surface of the movie and just within the viewer themselves.