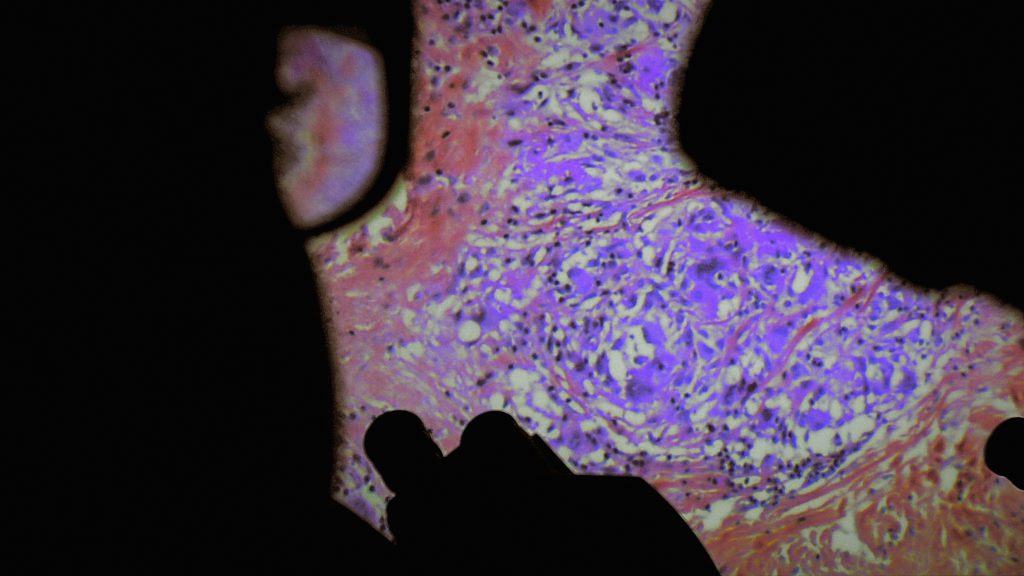 “It’s getting a bit abstract,” says one surgeon to another in De Humani Corporis Fabrica. His confusion arrives during an operation that both the doctors and film audience watch from a surgical camera positioned inside a body; the camera has zoomed in too far, and the surgeon has lost his way. His comment is comically on the nose, as directors Véréna Paravel and Lucien Castaing-Taylor are masters in the art of abstraction. Working under the mantle of the Sensory Ethnography Lab, an interdisciplinary program housed in Harvard University, the pair have co-directed three documentaries that privilege tactility over narrative or exposition. Like Leviathan (2012) and Caniba (2017), De Humani Corporis Fabrica brings the viewer in hyper proximity to its subject, creating a profound sense of intimacy, yet also alienation.

Filmed across eight Paris hospitals, the movie depicts a series of operations, supplemented by other moments from the lives of hospital workers and patients. During scenes of invasive and open surgeries, cameras follow closely behind the scalpels, probes, and tubes, burrowing into the body or hovering just above its surface, exposing the strange apparatuses that lie beneath the skin. The scenes present the audience with an ironically foreign territory, bodily machinery we rely on but rarely see or understand. Observing these unknown landscapes becomes like cloud-watching, the mind matching biological objects to more familiar sights: a wall of inner flesh resembles a blanket of pink insulation; slices from mammograms recall an old book’s marbled endsheets; and during an eye procedure, a pupil transforms into a gaseous orange planet.

Lest we be entirely subsumed by these images, dialogue from the medical staff grounds us in the rational world as doctors and nurses argue, banter, complain, and coordinate. Their jobs are frustrating and exhausting, but also strikingly banal. While some scenes force the audience to watch through splayed fingers, the staff undertake their duties with detachment and practicality. They approach their work with a level of abstraction, though it differs from that which viewers enjoy. For a lay member of the audience, the film’s abstraction is inevitable and rooted in their relative ignorance of what’s playing out on screen. But for hospital workers, abstraction is a useful boundary they impose on their work with intention. Doctors describe a brain operation as a game, distracting themselves from the staggering nature of what they are performing. Elsewhere, a surgeon urges his colleague to cover their patient’s face. “For security,” he says, though there may be other reasons tool, like to shield the complex procedure from too much humanity.

Paravel and Castaing-Taylor’s documentaries each play with the horror genre. Leviathan and Caniba both work as monster movies, with a metaphorical sea serpent and literal cannibal as their villainous stars. Meanwhile, De Humani Corporis Fabrica is a neat entry into the body horror canon. The film’s terror comes not from grossness or defilement, but something more elusive: the body’s fallibility and overwhelming mystery that make us eternal strangers to ourselves. This frightening notion is not without a certain beauty. At the end of the film, a dedication appears above the final credits: corporibus omnibus, meaning “for all bodies.” It’s a reminder that these universal vulnerabilities are the basis of our connectivity.