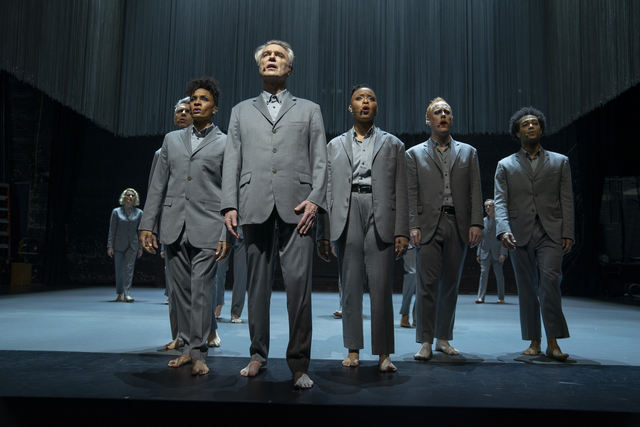 Like most activities that take place outside my living room, I miss going to concerts. This almost goes without saying, particularly here at the Hassle, which was built on a foundation of concert listings (I don’t go to concerts as regularly as I did in my younger days, but I had been excited to see US Girls in May). But one thing I wasn’t expecting is how much I miss going to concert films. There is, of course, no comparison between seeing a filmed performance and seeing a performer in the flesh, but there’s still something special about sitting in a roomful of people and seeing a band or performer trapped in amber at their peak. Some of my fondest moviegoing memories include shuffling at midnight for the staged-live weirdness of Tom Waits’ Big Time, or sitting behind a drunk mercilessly heckling Mick Jagger in Gimme Shelter, or feeling a crowd of godless hipsters being moved to tears by Aretha Franklin’s Amazing Grace. It’s not the real thing, but for a couple of hours in a darkened theater, you can almost fool yourself.

Watching a concert film at home, then, is two steps removed: you’re on your sofa, pretending you’re in a movie theater, pretending you’re at a concert hall. But with the best of the genre, the effect is the same. For an hour or two, you get to forget everything around you and commune with the music of a remarkable performance. Which is why, this year more than ever, David Byrne’s American Utopia feels like a gift.

Byrne, of course, is a concert film hall-of-famer: Stop Making Sense, the seminal Talking Heads showcase, is widely considered to be the genre’s high water mark. Like Stop Making Sense, American Utopia presents Byrne’s songs with a larger-than-life theatricality (Byrne performed it as an on-and-off-Broadway show for several months running). Also like Stop Making Sense, Byrne has recruited a great American filmmaker to document the proceedings, with Spike Lee tapping in for the late Jonathan Demme. It even features a number of the same songs; its playlist pulls selections from the breadth of Byrne’s discography, and naturally favors the tunes he wrote for his legendary band. So why bother with this one?

The easy answer is, “Because it’s great,” but you probably want more than that. For starters, Byrne wisely eschews a traditional touring band (after all, what conventional rhythm section could hold a candle to the mighty Tom Tom Club?). Instead, Byrne surrounds himself with a wildly eclectic array of instrumentalists, mostly on percussion. Each musician either carries their musician or wears it mounted on their body, and even the electric ones are unencumbered by wires (as Byrne reasons in a bit of typically cockeyed between song banter, “The thing that humans enjoy looking at more than anything else is other humans”). The result is a singularly cinematic performance, with the twelve bodies on stage constantly traveling around each other in elaborate choreography. American Utopia is not a “play” in any sense of the word, but it’s certainly something more than a “concert.”

Likewise, this is more than just a filmed performance. Spike Lee is no stranger to performance films, of course– see his blockbuster standup showcase The Original Kings of Comedy, as well as the landmark music video for Public Enemy’s “Fight the Power”— but he is primarily known as a director of narrative features and, at first blush, an odd choice for the project (when I first heard he had signed on, I assumed the reporter had misspelled Spike Jonze). But Lee brings his eye for character, filming the performance less like a recording of a stage show and more like an honest-to-god movie, complete with close-ups and dramatic angles. Spike Lee has now given us two of the most vividly realized characters of the year: Delroy Lindo’s Paul and David Byrne’s David Byrne.

Of course, Byrne has always felt something like a movie character. With his grey suit, coiffed shock of white hair, and earpiece microphone, Byrne looks more like a Viacom CEO delivering a TED Talk than a Rock & Roll Hall of Fame inductee. But then, that off-kilter squareness has always been an essential part of his persona; even in his CBGB days, Byrne came off closer to Anthony Perkins than Richard Hell. “David Byrne” has always been something of a character, and his 40+ years of rehearsal have perfectly primed him to carry a movie. His between-song patter is clearly scripted, but never sounds forced, dispensing pearls of oddball wisdom and the occasional anecdote about his songwriting process. I’ve never been a podcast guy, but if Byrne had one, I’d listen in a heartbeat.

Then, of course, there’s the main draw to any concert film: the music. Simply put, these are just great songs, thrillingly staged and joyously performed. Cynical as we may be about aging rock musicians trotting out their hits, there’s no denying the thrill of hearing a song that means something to you performed by its original artist, especially when it’s revitalized in a reverent yet unique configuration. Naturally, the Talking Heads material overshadows the solo Byrne numbers (though “Toe Jam” is an underappreciated banger with a jaw-dropping music video, and I yelped with joy to hear it included). But even the less memorable songs are enjoyable and well staged, and the classics among the repertoire are flat out revelatory. Highlights include “Road to Nowhere” (which opens with Byrne and company lit only with mock cell phones, and ends with a conga line), and “Don’t Worry About the Government,” a personal favorite off Talking Heads 77 which plays very interestingly at this particular moment in time. As an eight-year record store veteran, each of these records is imprinted on my psyche (even Naked), and hearing new life breathed into them is a sheer delight. 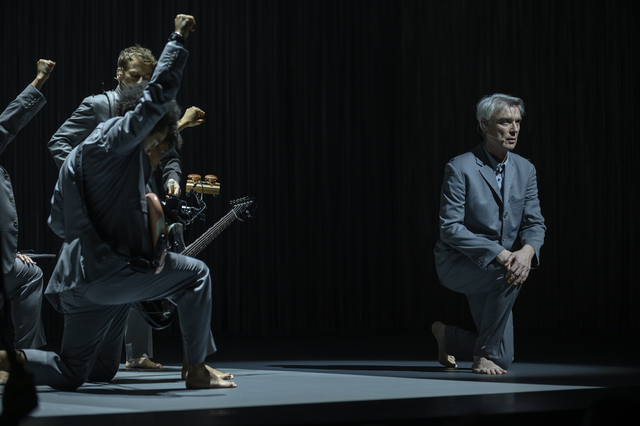 There are some who might dismiss American Utopia as a little too NPR; Byrne’s pleas for climate action, however eloquent, are clearly preaching to the choir, and the periodic shots of the middle-aged, mostly white audience recall those yearly PBS specials where they trot out whatever elderly doo-wop singers they can find who haven’t died yet. When Byrne announces a cover of Janelle Monáe’s “Hell You Talmbout” (with a prologue making clear that he sought her blessing first), the whole endeavor threatens to teeter into something altogether too bourgeois. Yet the number proves to be a highlight of the film, thanks in no small part to the band’s fiery performance and the incendiary eye of Lee (who takes the opportunity to deploy his formidable montage and whip-dolly skills). Byrne may play the aloof savant, but he has always known exactly what he’s doing.

Which speaks to why American Utopia feels so good right now. It is an impeccably crafted piece of entertainment, yet for all of Byrne’s deliberate detachment, it never feels cold. Like the best concert films– the best concerts, even– it allows you to lose yourself in great music and dazzling visuals. I probably don’t know your specific circumstances, but I’m going to go out on a limb and guess that you need this film right now. I do know that I haven’t felt better watching a movie all year. I look forward to the day that I can go out and see some live music, but until then, this will do nicely.