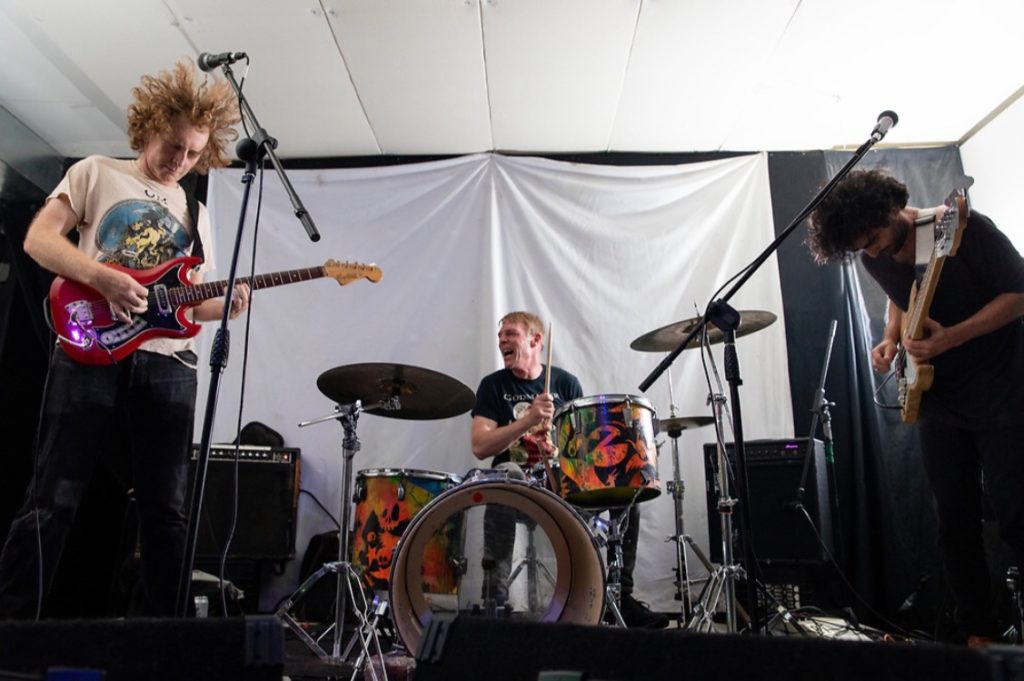 Upper Wilds will be playing Hassle Fest 10 on Nov. 10. Read more below.

The tune of Upper Wild’s new song “Hellcoder” cheerily bleeds with longing. A fizzing, synthy sound heralds the track with a tenderly ascending melody line; a delightful earworm. But this song is pleasantly deceptive, wrapping the warm, wistful sounds of ‘60s rock around thoughts of apocalyptic dread.

In a recent phone interview, Friel explained that “Hellcoder” was inspired by the current state of American politics. He defined “Hellcoder” as “the coder of this Hell that we’re in.”

“I was feeling like, things are … pretty awful in our country, but in this way that feels so cheap and heavy-handed, and obvious,” said Friel. “The idea that…fascism and overt racism would return in the hands of a … dementia-addled gameshow host, is so obvious…It feels unbelievable… it feels very surreal.”

The synthy sound at the beginning is actually Friel’s voice processed through guitar pedals. He said he decided to make that sound after “the folk tradition of playing guitar and having a harmonica” at the same time.

“You have an instrument that you can play with your mouth while you play guitar, and so I tried to develop a modern equivalent of that,” Friel said. “I just have a pedal that I can switch from it being a relatively normal microphone vocal sound, to something that sounds more like a screeching, feedback-y, distorted, noise harmonica.”

“Hellcoder” is one of nine tracks on Upper Wilds’ new album, “Mars,” which was released Oct. 19 via Thrill Jockey Records and Probably Feeling Better Music. The album was recorded with Brooklyn-based producer and songwriter Martin Bisi, who has recorded albums for Sonic Youth, Swans, Helmet and White Zombie, to name a few.

“He’s sort of a local legend in Brooklyn for recording loud crazy bands,” said Friel. “He does a really good job of just capturing loud, fuzzy bands in this big cavernous basement that he has.”

“Mars” is Upper Wilds’ second album, and the first in a series of records that are “themed after the planets” as well as the first to feature live drums.

“The first record [‘Guitar Module 2017’] is more something that I did myself, and asked then asked Jeff [Ottenbacher] to come play on it,” said Friel. “So [‘Mars’] has … more of a three people playing in a room [vibe] to it, than the previous one did, which I think came out really well.”

Upper Wilds includes Friel, drummer Jeff Ottenbacher and bassist Jason Binnick, who recently replaced Zach Warehoff when he moved away. Warehoff is featured on the album.

In addition to Upper Wilds, Friel also makes electronic music by himself under his name. At this point he is considering two projects; he has written half of the next Upper Wilds record, and he’s deciding whether he wants to make plans to record it or make another solo record.

When he’s not making music, Friel, a Brooklyn resident, works at a nonprofit called the Youth Services Opportunities Project, which “engages youth, college students and adults in meaningful service experiences,” according to the organization’s website. He has worked at YSOP for eight years.

Upper Wilds haven’t played in Boston in a few years, according to Friel. He said that he’s slowed down on touring since the birth of his son, Wolf, five years ago.

“So the last five years I’ve mostly been recording but not touring too much,” he said.

Right now, Friel’s biggest challenge is “staying positive and staying proactive” in the current political climate. He’s upset about the country’s “drift away from caring about climate change” and “the gap between rich and poor continuing to get worse.” Right now, his music is helping him cope.

“The thing that helps me the most is to make more music,” said Friel. “I’m just gonna be cranking out more records than usual, because I feel like it’s something that can keep my mind in the right place, and ideally help me connect with other people.”