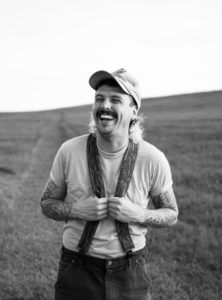 At first glance, the album art led me to believe I was about to dive into a garage punk album. Shoulders, who was once on track to become a professional illustrator, has done the artwork for all three of his LP releases; he reflects the influence of punk music and culture in his lyrics and album art. The cartoon style artwork paired with artist proclaimed “grandpa music” captures the dichotomy of Shoulders’ music and philosophy beautifully.

Shoulders grew up playing punk music as a side gig to illustration; somewhere along his artistic journey, his passion for music took the front seat. Growing up, Shoulders was surrounded by the soft influence and interaction with country music in the formative and organic setting of his home life; his father a whistler, and his grandfather a recording gospel and country artist. Identifying with the culture and philosophy of punk music more than he did the culture of country, concluding that no one will listen to you if you’re yelling, and having his generational tie to the country genre all compounded to create his beautifully chilling works of art.

The recording process was described to be just as chaotic and home spun as the last year of coronavirus has been for everyone. The album was recorded in his hometown at Homestead Recording. Similarly to most of his other recorded music, the album was recorded analog, paying homage to the roots of the country genre while giving the project a whole new level of passion and heart.

The world of country informing the majority is currently outlaw-style 70s country. Shoulders expressed wanting to be a new face of representation in the genre, where his inspiration draws from old country but applies to the experience of the modern world where we are reliving lessons that were experienced through older music forms.

Angst at the collapse of global capitalism and countless wars set to the tune of beautiful strings, harmonies and whistles, this is an album for coming down from existentialism. Take a deep breath, turn off your consciousness, listen to “Home on the Rage” and tell yourself, everything is going to be okay.

You can purchase the album and more merch through Shoulders’ Bandcamp.

Liked it? Take a second to support Emily Pitcairn on Patreon!