Ahh, My Neighbor Totoro. You hold such a special place in my heart, to try and sum you up and try and convince some readers to go feels like a near mammoth task. I could talk about the history of this film, the animation style that so captures feelings of warmth and comfort, the genius narrative that creates tension without an antagonist, the list goes on.

My Neighbor Totoro, directed by the acclaimed animation genius Hayao Miyazaki, was released in 1988, at the same time as Takahata’s The Grave of the Fireflies. The levity and good-heartedness of the former were thought to pair well with the sadness and anguish of the latter, and boy did that work. A cultural icon in and of itself (yes, you can go visit Mei and Satsuki’s house in Japan) Totoro’s influence in animation and the film medium at large is immeasurable. The film follows Mei and Satsuki as they move to a new town following their mother’s illness, and encounter a magical creature: Totoro. 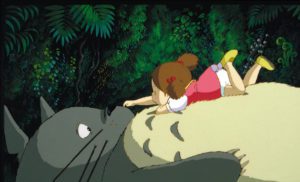 One of the strongest points of My Neighbor Totoro is the extreme attention to detail in creating a world of familiarity, in creating a film that “is not nostalgia; it is an appeal to know what we have lost.” (Eureka Magazine, Special Issue on Hayao Miyazaki) Watching the film gives you a feeling of longing and warmth towards a familiar time, whether it was your own specific experience or not. The character of Totoro itself embodies this in its physical characterization, in how you can almost feel its exact warmth and softness when Mei meets Totoro. When Satsuki gets her hair brushed by her mother, executed with such finesse and attention to detail, you can almost feel as if it were your very own mother brushing your own hair. 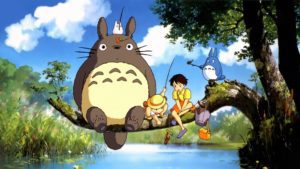 Totoro is not inherently a philosophical film, but certainly can be read as one. What is Totoro? A figment of the imagination, a coping mechanism, a real creature? But honestly, does it matter? This is the place that My Neighbor Totoro brings you to. Miyazaki brings you into a world of childhood fantasy, where there are no bad guys, just bad situations, and where the strength to overcome can come in any shape, size, or form.

Part of the ongoing series: Kids International: A GKids Retrospective