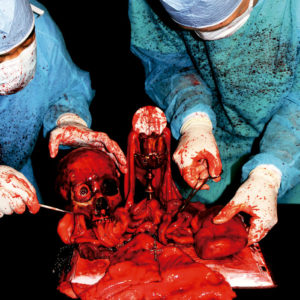 Just beyond the filthy record sleeve is a flood of human detritus and no frills goregrind riffs. The album vacillates between succinct mood-setting moments and uptempo grind insanity. Taking cues from fast paced bands such as the seminal Terrorizer and the sonic aesthetic of goregrind, Miasmatic Necrosis’s songwriting cherrypicks the rhythmic clarity of grindcore and the simplicity of early death metal.

When the band is not blasting at 240 bpm, they are pulverizing forth with midtempo interludes that make subtle nods to the groovy dancebility of hardcore. The opening track, “The Putridarium” begins with the gurgling of the album cover’s bloody puddles of entrails only to materialize to a dark two step mosh intro dense with downtuned guitar and surgically sharp drum licks. This crushing weight returns halfway through the album on “Muciferous,” which slows things down after a seemingly endless span of dizzying blast beats.

Another aspect of Miasmatic Necrosis’s sound worthy of praise is the truly demonic vocals. Although vocal filters are by no means new to metal, there is much debate over its validity in a genre that celebrates musical skill. Goregrind, however, celebrates the sheer camp of body horror and incentivizes sonic experimentation. The vocals on Apex Profane sound like a burping puddle of guts, which– in a way, echo the sloshing gore from the opener. It’s as if the oozing pile of death materialized into an eldredge sopping wet-with-blood postmortem beast that dutifully fills the record with guttural death metal vocals.

Apex Profane is a disturbingly fun exercise on not just embodying the pure insanity and camp of horror, but truly owning the sheer brutality of it. Like the album’s introduction, the titular final song reminds the listener that, even as the album’s concept fully materializes with the sound of rock and roll heart beats amid guitar divebombs and feedback, Miasmatic Necrosis is an ocean of death and its depths are too dark to see beyond its burgundy surface.

The boys from Forks are deliberately evasive when speaking personally, refusing to mention who they are and where they’re from (although it’s…

“Wouldn’t you think that a species of this kind would adapt to the climate of a permeating grime?”

Chrissy B – “More than Anyone”

When Berklee student Chrissy Bernard came face-to-face with the halting effects of COVID-19 while recording her new single, “More than Anyone,” she…