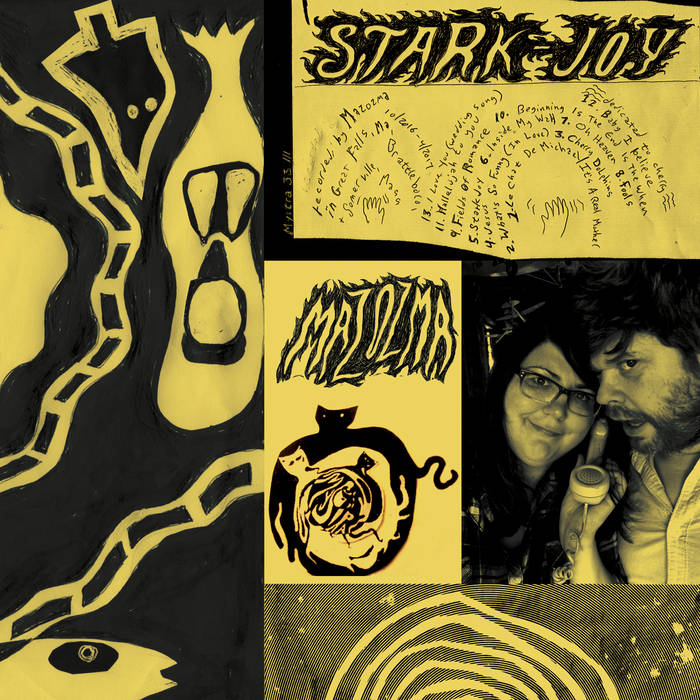 ‘Stark Joy’ the latest album from Mazozma is a stark and intimate collection of songs that puts up very few walls between itself and the listener. It was actually released a few months back in 2018 by the venerable Northampton based Feeding Tube imprint, but due to the fact that they released so much great stuff last year, we’re still catching up. So forgive us if this dispatch is a bit late.

For those unfamiliar, Mazozma is the nom de plume of one Ma Turner. His latest is almost exclusively just his six string, and unadorned vocals working through a variety of feelings mostly of the romantic and existential variety with a very palpable sense of longing; the whole thing sounds as if it was captured on home recording set up that doesn’t sound any more complicated than a microphone plugged into either a laptop or tape deck. Some of the songs even include the sounds of Turner fumbling around to hit the stop button after the song finishes. It’s folk music in the truest sense of the word, and gives the listener the same sort of outsider buzz that homemade CD-R or demo tape from some unknown individual you discovered at your local thrift store would.

There are even a few times that you get the sneaking feeling of not being sure if you’re supposed to be listening in on the proceedings or not. Due to the spare recording techniques employed, you have to listen a little harder to catch the words at times, as they are inexorably linked to Turner’s mysterious web of sound. Intentional or not, it only serves to pull the listener into to the proceedings further. Evoking a sound that brings this writer back to his teenage years of listening to tapes on the Shrimper label, and the early 4-track recorded works of Lou Barlow and Eric Gaffney. It’s a raw approach to musical expression that we don’t have enough of these days. For those unafraid of getting a little naked in the afternoon, a little ‘Stark Joy’ might just be what you need.