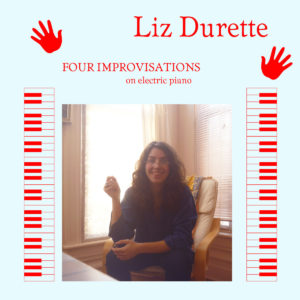 Liz Durette has an ability to put something in front of herself, familiar or foreign, split it open, and find a place for everything that spills out. Her 2016 cassette Six Improvisations felt like a set of microscopic studies on melody. With Four Improvisations, Durette lets ideas furl as is; she provides a wider and more texturally present set of improvisations that considers everything, and the wayside. Taken from a six-hour session recorded in the Red Room, one of Baltimore’s weirdo havens, Four Improvisations sees Durette framing her eloquent grammar even more accurately than before.

Durette has mentioned before that having practiced certain classical pieces, specifically Shostakovich’s Preludes and Fugues, “cracked open” the keyboard for her. Learning about how Shostakovich “moves around the keyboard” in his compositions loosened Durette’s unconscious constraints, and allowed her to approach the keyboard more through gestures. And this shows: listening to Durette feels like watching an unending spool unravel; her music feels prolific not because it’s concerned so much with making a concise, universal statement, but because it turns over each stone in its way and defines each surface. You get the impression Durette is continually composing, always reconfiguring an endless stream. And Durette’s tender mindfulness to the keyboard’s touch-sensitivity has become a fluid backbone to her pieces; the pressure applied to keys and the flux dynamics behind the notes feel like another composition within itself, superimposed over the tones.

The melodic breeze and effortless negotiation of Four Improvisations could draw a comparison to some of Alice Coltrane’s late ‘70s, spiritual albums (think Radha-Krsna Nama Sankirtana). If the wind rustled Durette in a certain direction, and an ensemble of sorts was placed behind her, you could imagine her avant runs and clusters being harnessed into a sound similar to the plush, pastel blankets on Coltrane’s albums, a sound bordering a forceful, soft-toned pop. The dexterity of Durette’s structures lets you see the space around them, and it’s easy to imagine other voices reacting to what’s being said. But for now, Durette chooses to play alone. And hearing how she listens to herself, recasting her own phrases to balance control with commotion, wit with charm, this makes sense. Durette’s patience alone spins a vibrant environment.