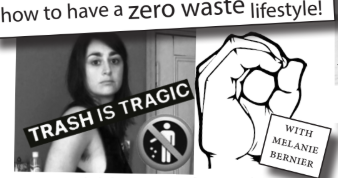 HOWDY, my trashy babies! I’m writing from Memphis, Tennessee, where I once heard 95 degree weather described as “nice ‘n cool.” Where I once saw a mosquito suck a whole cockroach up through its proboscis, like it was tapioca beads in a Boba tea. Where I once heard tell of bugs called “chiggers,” but only after it was too late.

Truth is, anything in Memphis will try’n eatcha if given half a chance and some BBQ sauce. That’s especially true of the artists. I’m holed up with quite a few of them right now at the Crosstown artist residency / compound / petri dish in Midtown. More on that in a second.

First, I need to ask: DID YOU KNOW that TRASH IS TRAGIC is more than a 250-word rant in the Compass? This paper column, ‘tis merely the pulpy prelude to an orgiastic digital bacchanal of zero-waste knowledge, published on THE ‘NET (by Sandra Bullock) every month! Hop on bostonhassle.com to learn:

For the July edition, I’ll highlight several Crosstown residents who make art and music with second-hand materials. If you’re curious about culture and garbage, and can tolerate the tone of my writing, then This Bud’s For You™.

PS – If you’re an artist, musician, writer, or curator, applications for the Crosstown artist-in-residence program are open until July 15! The residency is free; they give you an apartment, meals, a studio, and access to state-of-the-art equipment. Plus, you get to live in Memphis for a few weeks. Apply at crosstownarts.org and tell ‘em Smelly Melly sent ya!

With Photos and Citizen Perspectives

YEAR ENDER: An end-of-2019 Playlist from The Mad Music Mill

As we enter into a new year and decade, the Mad Music Mill squad has taken the time to reflect back on…