There is something incredibly special about noise rock shows in cramped, clamoring dive bars. The raw energy of these scenes is simply unmatched anywhere else in our world. I suppose it reminds me most of hardcore shows – the same energy, but with a lot less unbecoming seriousness.

Spectators have begun catching on to this reality and it’s allowing noise rock to have its moment in the spotlight. While the intentional dissonance of the genre brings much critique from those who feel “anyone can do it,” the reality is most performers don’t have the sauce. 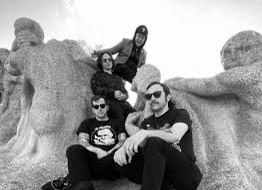 There is something tormented and detached requisite in noise performance. An immense abandon that not everyone can portray but to which we can all relate. Something in the collective suffering, particularly in these pandemic times brings us together. Not everyone can embody this vulnerable and honest emotion. Some babes, though, have all the sauce.

Enter Chicago’s Urine Hell, an enchanting foursome that first came together in 2019. I first stumbled across the gang online. A friend had posted a video of their set and the energy in the room was so enormous it came through the screen. I had to know more, so I reached out.

Urine Hell is Zach (vocals), Dave Sr (guitar), Dave Jr (bass), and Julian (drums). The crew asked that I omit their last names to avoid discovery of their crowd-surfing alter egos. That said, Davie Sr might be familiar to fans of his other band, Imelda Imarcos, and Julian to fans of his drumming in 96 Cougars.

When asked how they self-define, Zach tells me “noise rock with metal influences.” It’s certainly on the heavier side of noise, appearing on playlists with Nerver and Blackw 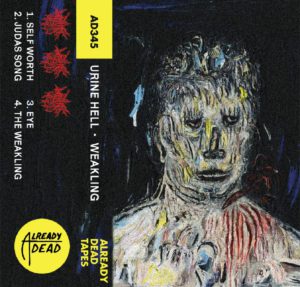 The band’s four-song banger of a debut “Weakling (Already Dead Tapes)” is an impressive adventure in storytelling. Lyrics on the release feel tortured and cathartic, marked by distressed screams that I loved immediately. The music is both whirring and sludgy with big drums that are more primal than tinny. You can grab a limited copy for yourself HERE.

o Boston. While the band has no nearby shows currently planned, he tells me that he’d like to tour our way in the future (invite them, for me, for all of us). That said, the band plays Chicago regularly, with local kin including Mr. Phylzzz and Heet Deth. Upcoming shows also include an out-of-town mini fest at Indiana City Brewing on Dec 10th.

For up-to-date info on shows, merch and more follow Urine Hell on Instagram and Bandcamp. Do not miss them live if you have the chance.