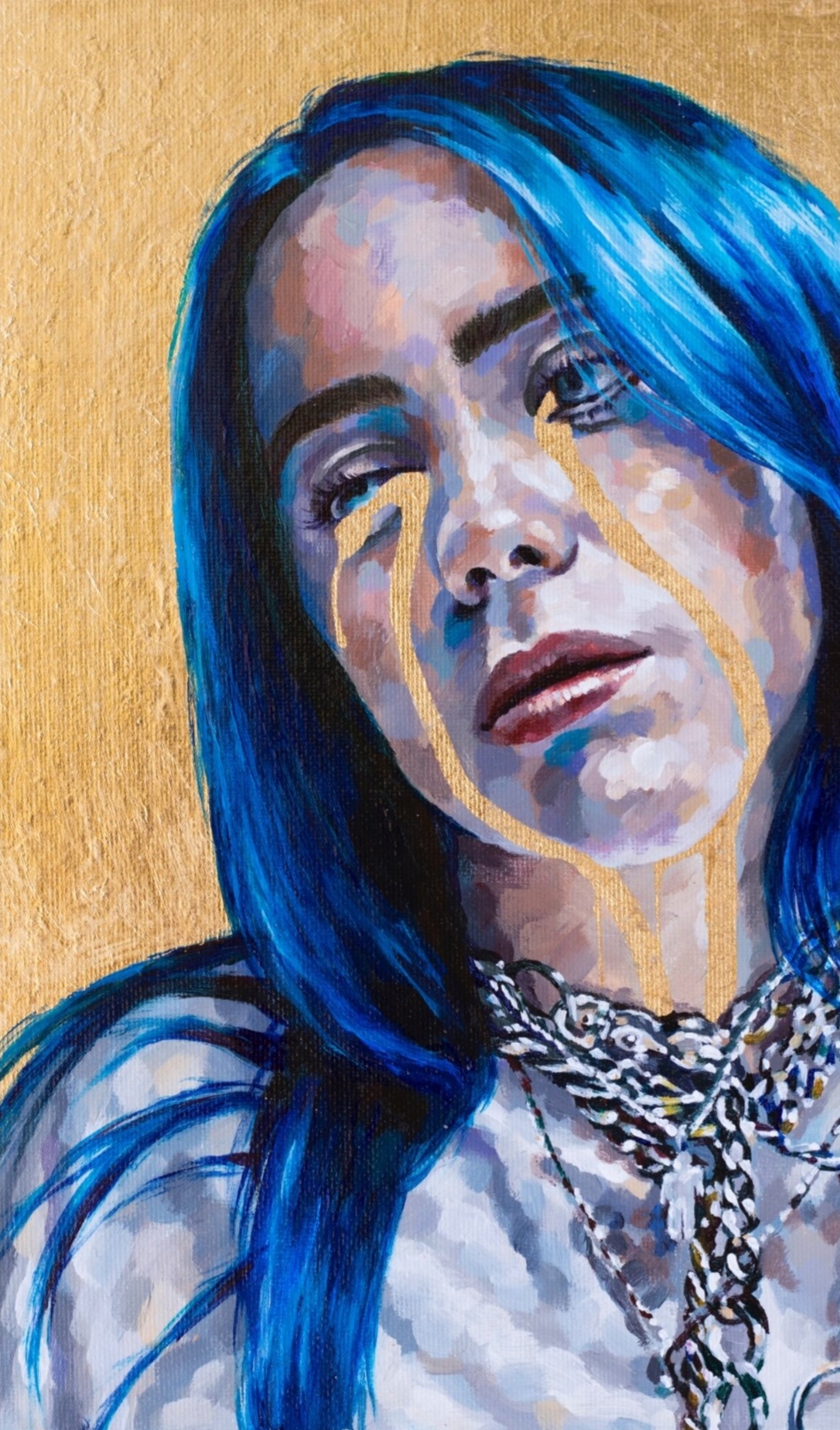 Jackie Liu is having a moment. Born and raised in Weston, the 17-year-old artist has racked up an impressive 1 million followers and 27 million “likes” on the popular social media site TikTok, a video-sharing app that lets users create and consume video content.

Liu’s story starts like a lot of other TikTok creators’ journeys began. TikTok was released in March 2020 as the pandemic forced people to quarantine inside their homes. Due to the inability to socialize in person – many people flocked to social media apps to stay connected with friends and family. Teens took a special curiosity towards TikTok – as it was the newest platform available. As TikTok grew in popularity – many creators saw their chance to create a name for themselves while others like Liu just happened to become popular almost overnight. Either way – over a year later many TikTok creators that were once only celebrities on the social media platform have now branched out to mainstream notoriety.

Creating TikTok videos was a way for Liu to waste time during quarantine. Her fanbase quickly grew as she created portraits of celebrities like Billie Eilish, Ariana Grande, and the late Mac Miller – their songs playing in the background of each video. In a few short seconds, Liu took her audience through her entire painting process from sketch to the finished piece complete with vibrant colors and oftentimes adorned with gold foil.

While Liu was building an impressive resume, it wasn’t until she published a personal piece entitled “Mother” that she saw a steep incline in viewers on both Instagram (another social media app that can be used to share both videos and pictures) and TikTok. Instead of music playing in the background, Liu told a story about her mother as she painted a bold asymmetrical piece of art. A woman adorns the canvas, curled up in the fetal position her long red and pink hair intertwined seemingly shielding her from the world around her.

In the video Liu speaks about the turbulent relationship she has with her mother. How from the start, her mother never wanted her – only agreeing to have a child after Liu’s father threatened divorce. 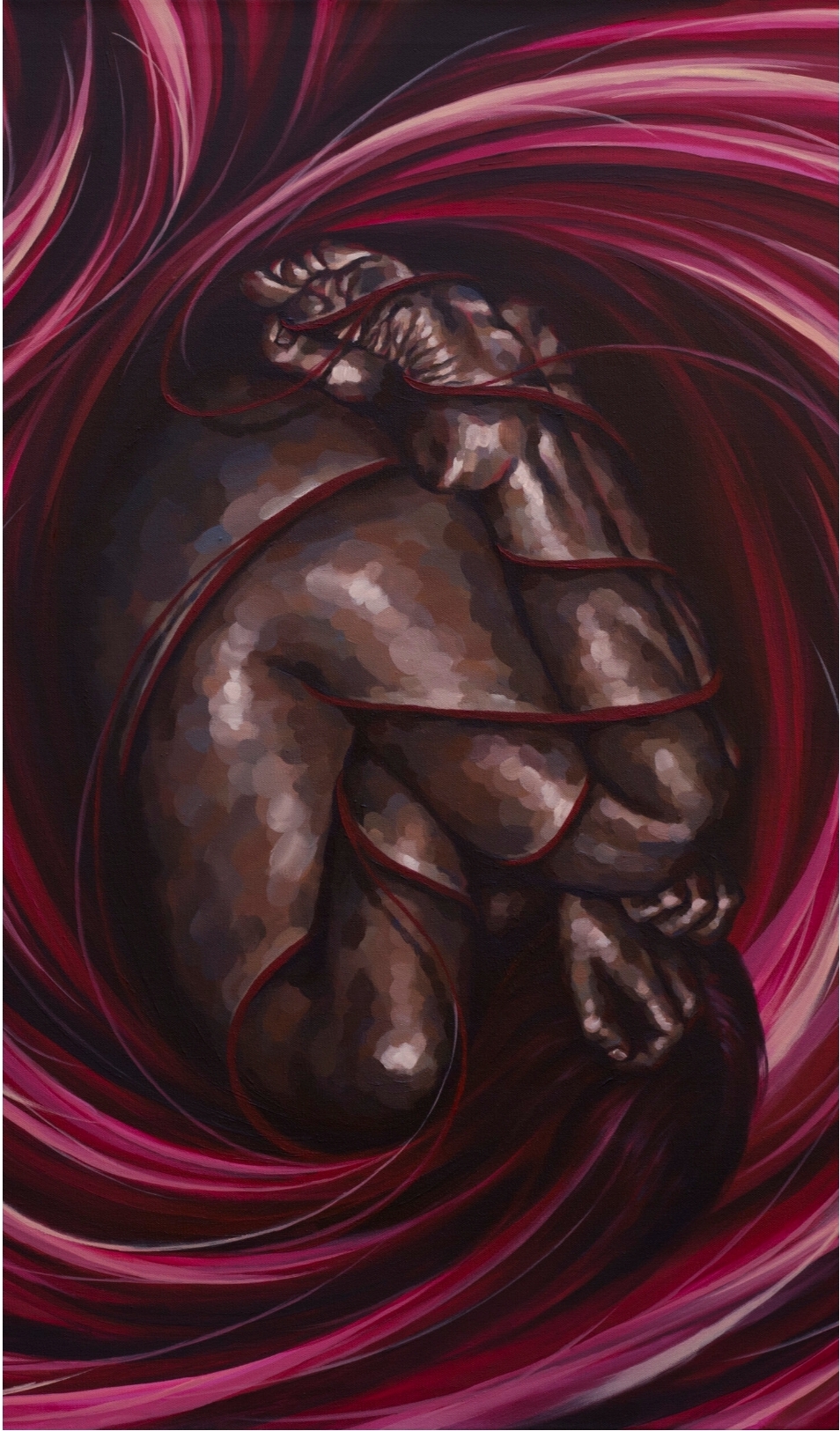 “My mother never wanted children, and she reminds me of it,” Liu tells her audience. “I hate you. I don’t want you…I will never speak to you again,” her mother would tell her. Through the video, Liu told of moments where her mother was so mean she blamed Jackie for her depression and caused her to be 20 minutes late to an exam.

Together Liu’s soothing voice juxtaposed with the dark content – the vibrant pinks and reds she uses to embellish the piece are beautiful yet haunting. Liu’s piece begs the viewer to bear witness as the audience watches the piece of art go from mere lines on a canvas to a grander creation that deserves a spot at an art gallery.

“I felt like a lot of my art pieces didn’t make sense without context, or would enrich the meaning of the piece if I explained it,” Liu clarified, citing how the short video format of TikTok allowed her to explore this concept. It was important for Liu to explain her artwork. Not only were her viewers able to connect with her, but she was able to connect with her audience as well.

She explained, “Because so much of my work is informed by personal narrative, sharing that side of my art made it more impactful.” She also noted that, because she is talking about taboo subjects like mental health and society’s egregious beauty standards, her art destigmatizes these subjects.

As Liu became more popular on social media she was determined to use her platform for good. “I think I’ve always been driven by the desire to do something more,” Liu mused. “I recognize I have all this privilege especially now that I have a platform.”

Liu mentioned she felt a sort of obligation to “use it for more than my own self-serving purposes.” Since April of 2020, Liu has donated the proceeds of numerous pieces to nonprofits around the world from Rosie’s Place, to Save the Children: Yemen. Proceeds from her portraits of the late George Floyd and Breonna Taylor were donated to the NAACP.

Liu’s latest social justice painting entitled, “STOP ASIAN HATE” was in response to the slew of hate crimes against Asians and Asian-Americans in the United States over the past year. 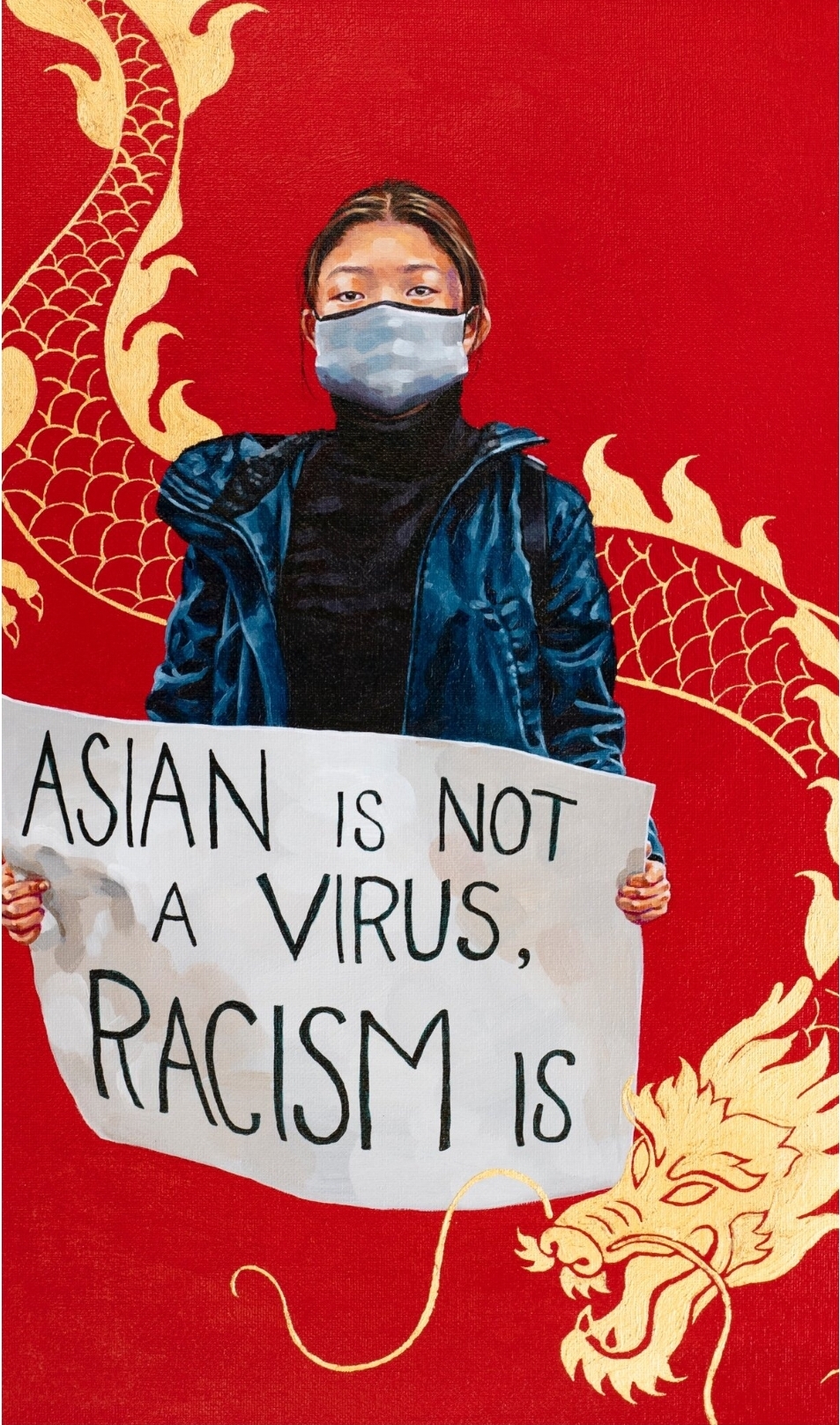 “I created this piece to harness this moment of cultural zeitgeist of activism around anti-Asian racism,” she said. As a second-generation Chinese-American, Liu explained that, “This issue is especially poignant because it implicates my own identity.”  Proceeds of both the original painting and the prints were donated to Stop AAPI Hate and Asian Americans Advancing Justice – Asian Law Caucus.

Jackie Liu has always been influenced by art. Between 2018-2019, she honed her artistic skills at Artists For Humanity, a nonprofit that “provides inner-city youth with keys to self-sufficiency through paid employment in the arts.” While there, she was directed by mentors in  the medium of acrylics by some of Boston’s most renowned artists.

Under the guidance of interdisciplinary artist Phoebe Warner, illustrator and Lesley University Professor Michael Talbot, and Artists For Humanity founder and muralist Rob Gibbs– who is best known for his murals throughout Roxbury and Boston–Liu not only felt more connected to Boston but grew as an artist learning different painting techniques while leaning into the advice and feedback from her mentors.

Her success on TikTok and Instagram have opened doors for her similar to many other successful TikTok creators. In just a year TikTok royalty like social media personality Addison Rae and dancer Charlie D’Amelio have begun to pivot to reality television while singer/songwriter Jax recently got signed to Atlantic Records after her song parodies garnered millions of views on TikTok.

It wasn’t until her success on TikTok that Liu started to take herself seriously as an artist. Still, she’s not sure what her future will hold. “I know I want to have in my life in some capacity. I don’t want to preemptively commit myself to any one path and potentially close off avenues of exploration.” She adds, “I’m embracing the not knowing – it’s all part of the process.”

To see more of Jackie Liu’s work or to purchase a piece please go to her website https://jackieliuart.com/

(All images taken with permission from @jackieliuart on Instagram)