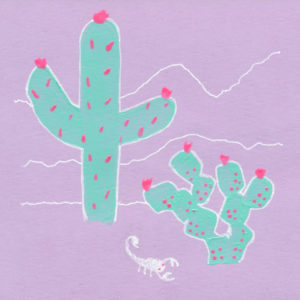 Ben Potrykus: I first met you when you played Great Scott in Allston with The Love Language in 2013 or so. I’m guessing y’all were touring off of the album Ruby Red. I remember y’all were a 6-piece or something, which I thought was pretty impressive. What’s your connection to Stuart McLamb, who started that band?

Autumn Ehinger: That show was so fun! That was my very first tour with the Love Language.

I knew Stu from around town — I had been playing in other bands when the Love Language started, so we shared a lot of mutual friends. Then, that spring he asked if I’d be interested in playing keys on the tour for Ruby Red, which was about to come out. I was a big fan of the Love Language so I kind of dropped everything to do it.

Stu writes and records mostly by himself, so prior to that tour, there had been several different incarnations of the live band. But the Ruby Red crew ended up really clicking — Eddie (who plays bass), Tom (who plays drums) and I have been the touring members since.

BP: Have you been to Boston since? Had you visited before?

AE: Wow, now that you mention it, I think that was the last time I was in Boston. For a while if felt like I was visiting pretty frequently — I have a good friend that lives up there, and I’ve come up a few times to visit her. I remember being in Boston one weekend in January when I think it snowed 15 inches overnight and never got above single digits. That was very exciting and exotic, coming from North Carolina.

BP: You’re from NC originally, and went to college there, if I’m not mistaken. But I read you lived in Japan for a while and moved around a bit. Are you happy to be back in NC? What is it that brought you back? What’s the music and art community like there?

AE: I grew up in rural North Carolina, and went to college in Chapel Hill. Afterwards I spent a few months way out in the desert of Arizona (my desert obsession is still going — it’s the cover of the tape), and I lived a while in Tokyo, all trying to figure out where to go or what to do. Which helped me realize how much I love North Carolina. Wherever I go, this is still home, you know?

I think the music community here in the Raleigh/Durham/Chapel Hill area is a really special thing. Everyone is pretty friendly and supportive of whatever it is you’re doing. You can feel free to be yourself and to create and to just exist, really. There’s so many musician-run venues and festivals and people who genuinely care about music and art. And the overall lifestyle vibe here is pretty chill. A few years ago I could say the cost of living was low too, but that’s changing in Durham–I guess you can’t have everything. But if you like hot weather with high humidity, North Carolina is a great place to live.

BP: I heard about your other solo (or mostly solo) project called Cassis Orange through your interview with Juan Huevos on the Lurk Mode podcast, but I had a hard time tracking down tunes. I found a couple of great covers on Bandcamp (“Postcards from Paradise” by Flesh for Lulu and “Some Guys Have All the Luck” by Rod Stewart), a split with a band called Nieces and Nephews, and a lone EP on Mediafire. Did anything else come out under that name?

AE: Dang, that EP still exists on Mediafire?! I thought I had purged the internet of it but then again I guess you can’t purge anything on the internet. No, that is a very complete Cassis Orange discography — good sleuthing!

BP: Did Cassis Orange evolve into Moon Racer, or are you looking at it as a completely different project?

AE: I suppose Cassis Orange did evolve into Moon Racer, with a really long pause between the two. In some ways they are the same thing — it’s still me, singing and playing keyboards. But, they feel different to me, and mean different things to me.

I played music under the name Cassis Orange in my 20s. When I think back to playing shows or recording then, there seems to be a lot of uncertainty and insecurity, maybe from being younger, or doing something for the first time, or not feeling sure about what I wanted or how to achieve something the way I envisioned it. In retrospect, I was frequently trying to accommodate the unsolicited advice and opinions of others. It became stressful. Eventually I just did not feel like playing songs I wrote in front of people.

Moon Racer is sonically similar to the later, more chilled-out Cassis Orange stuff. But, Moon Racer is more about leaning in to my limitations, and not feeling insecure about them. I record mostly on a 4-track cassette so I don’t feel overwhelmed with the possibilities of the digital age. And the lyrics are more literal, because I guess I don’t care who knows my business anymore.

I think the main difference is, Cassis Orange always wanted to be “a band,” but Moon Racer is just me, in the sense that the Moon Racer songs exist whether I decide to share them or not; they function more like a journal, and I’ve just decided to let anyone eavesdrop who wants to. When I’m sad in my house I’m like Dwight from the Office playing the blues on his recorder. I just play a little Casio instead. I’m aware it’s pretty melodramatic, but whatever makes you feel better you know. So it’s mostly a vehicle to feel less sad, and others can listen if they want to, or not. Moon Racer is just me being myself, and finally being ok with that.

BP: I get pretty caught up on lyrics sometimes–writing them and listening to or reading others’. Your new tape Is It Really a Secret? kind of reads like a short, bittersweet story with a happy ending–a love interest, a protracted courtship that falls apart, a very appropriate Magnetic Fields track playing in your headphones, the realization that you can’t even remember why you cared, and a “New Crush.” I really enjoyed reading through as I listened.

AE: That’s the best synopsis of the tape I’ve heard. That’s exactly it!

BP: Was this narrative arc intentional when you started out? Did you release your original EP, which contains a couple of these songs, and then realize the story wasn’t over?

AE: Yeah — those first three songs were written in January, February, and March. They’re all about love — unconditional love, at the expense of yourself, not caring or even noticing when someone is treating you unkindly.
Later, after I was out of that haze, I didn’t like the idea of those three songs getting to hang out by themselves, like they were the whole story. I wanted to re-release them, with the rest of the story attached. So, the second half of Is it Really a Secret? is the June through October songs — the realization it was a bad deal, cutting your losses, and keeping it moving.

BP: How did selecting the MF cover happen?

AE: Meaningless is one of my all-time favorite songs. I think about it a lot, because I feel like it a lot. Anytime a relationship ends I listen to it maybe 100 times. It’s so anthemic, and the bitterness is cut with such a dry sense of humor it helps you just roll your eyes at the person you’re thinking about. (And at the very end there’s this little shift, was it really all that bad?) So, here it felt appropriate to cover, to borrow in my own narrative.

AE: Ha! You know I maybe didn’t completely notice this but you are totally right. I don’t know, I do feel like I am legitimately exclaiming about some of this stuff. So I will probably keep exclaiming!!!!!!!!!!!!!!!!!!!!!!

BP: What’s next for Moon Racer?!

AE: I’ve written a lot of songs in the last year, and will finally get a chance to work on recording some of them when I get back to North Carolina in July. Maybe I will have something new out before the end of the year.
In early August, there is a new Love Language album coming out, so we’ll be touring for that most of the month. Moon Racer is going to be the tour support too — and Tom, who plays drums in the Love Language, will be playing drums with me. I think it’s going to be a lot of fun.

BP: Also in your interview with Lurk Mode, you talked about your affinity for the movie Gremlins (referenced in the song title “Song of the Mogwai”). You said you hadn’t seen Gremlins 2 yet. Have you rectified this egregious error? May I suggest watching the Key & Peele skit about Gremlins 2?

AE: Oh man, I’m really glad you reminded me of that egregious error, because I haven’t yet, and now it is at the top of my summer viewing list!

Wow, that Key and Peele skit is just how Juan Huevos led me to envision that movie. What were they thinking?! I feel horrified but at the same time I am really looking forward to Googley Eyed Gremlin. And Hulk Hogan, of course, especially now that I know he’ll be talking directly to me.

Photo credit: Coleman Rogers Sapling have been one of my favorite Massachusetts bands for about 5 years. Although I have played many…

“You can create the life you want to live:” A Spiritual Odyssey with Springfield...

I’ve lived 10 minutes from Springfield for all but four years of my life, and every time I drive by the hovering…