Fucked and Bound play the upstairs at Hong Kong on 3/11 with Haunted Horses, American Ethos and Wolf Whistle. Music at 8:30pm, $10 cover and don’t skip it! They are not to be missed!

This is Fucked and Bound’s first time in Boston. Brian McClelland plays guitar in Fucked and Bound, Lisa Mungo is the vocalist, Rah Davis is the bassist, and Mat Chandler plays drums. 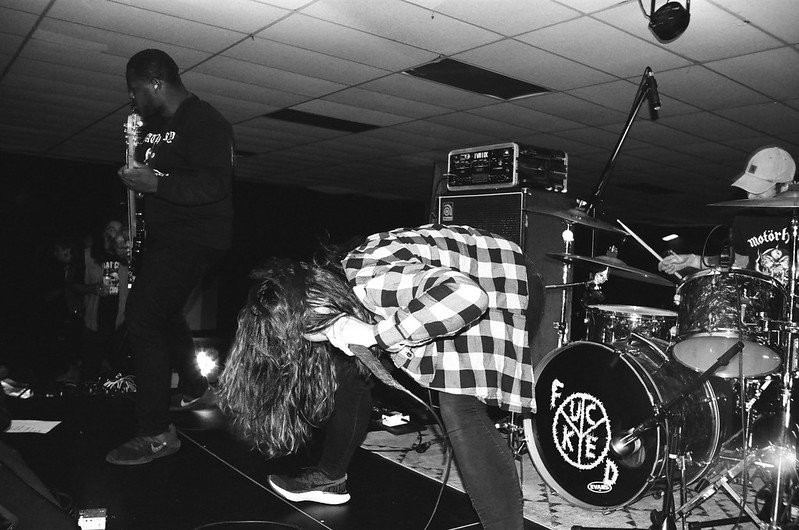 BH: How Long have you been a band?

Brian: We’ve been a band since about 2016. I had been writing songs for our previous band, He Whose Ox is Gored, and I had a handful of riffs and tracks that were more aggressive and up tempo than that band was about. I grabbed some friends and we started working on the first batch of songs. We put out our Live at Black Lodge 7” at the first show.

BH: Is this your first time in Boston?

Brian: With this band, yes. I’ve always loved Boston. You have a beautiful city here with tons of talented musicians. There are always killer bands coming out of here. 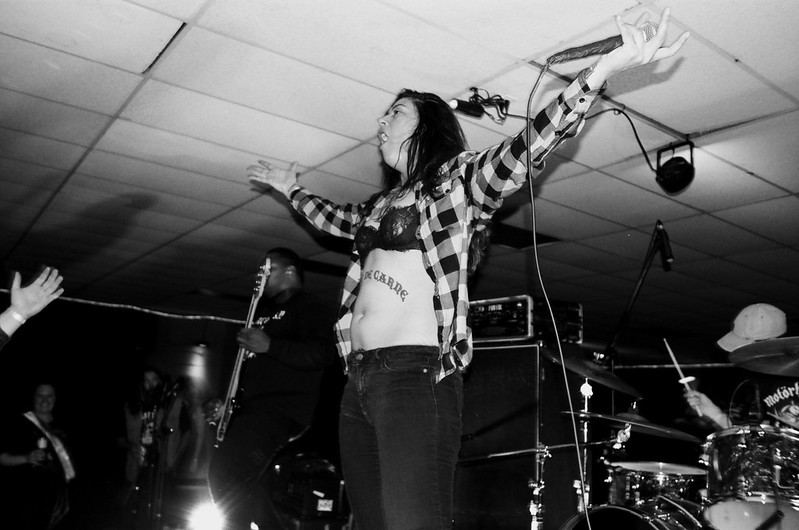 BH: What are your favorite time killers on the road?

Brian: I don’t usually have much downtime personally, but when I do I’m trying to read more poetry on the road. Lisa got me into Charles Simic recently. I just finished The Plague by Camus. Mat plays video games, he’s a killer at Pub G. Rah loves to lurk the Catatonic Youths instagram, haha. Lisa’s usually the business, tour managing or working on Press & socials.

BH: The second floor of the Hong Kong has some of the worst Karaoke in Boston going on. If you need a warm up, what will you sing?

Brian: The World Has Turned and Left Me Here by Weezer is probably my favorite. Lisa and Rah are the karaoke masters though. Rah does a pretty good Believe by Cher.

BH: Boston has a long hardcore history, are there any bands from New England that you take inspiration from?

Brian: Totally. We love Converge and Cave In. Orchid is definitely another huge influence for us. Current bands like Pummel and Vantage Point are awesome as well. Restraining Order is also killer, but they’re Western Mass. 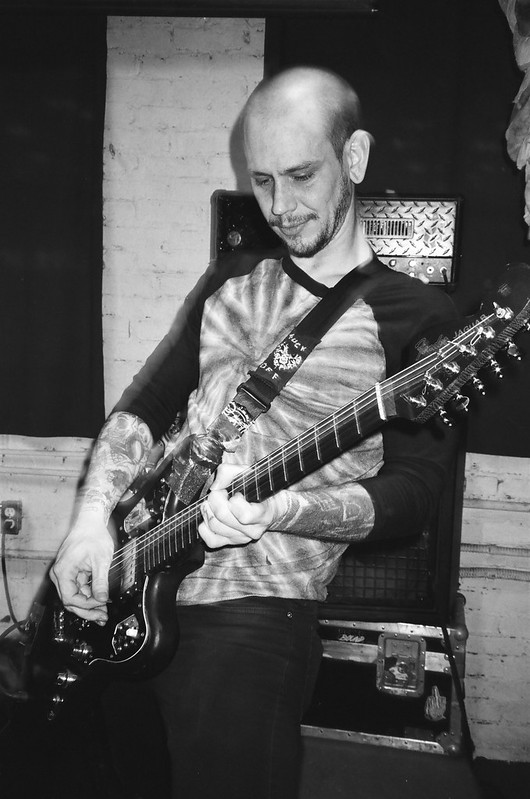 BH: What bands in Seattle have you excited right now?

BH: When did you start playing hardcore and what drew you to it?

Brian: When I was in college in Albuquerque, NM, I played in a few different hardcore bands out there. Lisa and I are always doing different projects, but we’re always around punk and hardcore at our warehouse venue, so it’s been a constant influence. There’s always that immediacy with hardcore that’s appealing. And it’s always a good bellwether for how people feel. 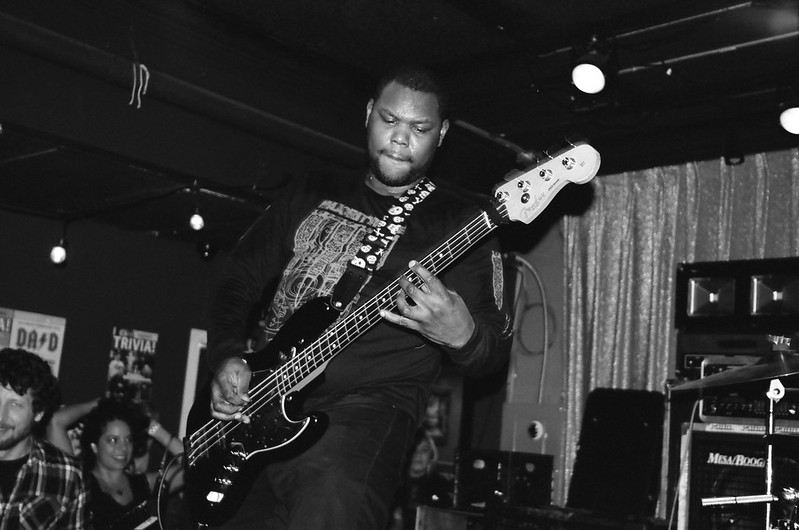 BH: Kick you in the gut hardcore seems to been having a resurgence over the last decade while still sounding fresh and vibrant. I’d place you all in that movement. Why do you think this is going on?

Brian: Thanks! Yeah, I think people are pissed. Obviously, there a lot of division in the country. I think people across the political spectrum have frustrations about wage slavery, lack of access to healthcare, daily misogyny and racial tensions. And we’re frustrated with an administration of know-nothings that bully people on Twitter instead of getting shit done. That pisses people off, and they’ll let you know. I think the current hardcore resurgence is a reflection of that for sure.

BH: Are you band BFFs with Haunted Horses and how did that come about?

Brian: Absolutely, haha. I always tell people they’re my favorite band, and it’s true. We’ve known each other for years. Their drummer Myke Pelly has been doing art design for our bands and venues for a long time, and Colin and I work together. I put out their Cold Medicine EP in 2017 on our about Assault label previously, and we’ve been pretty close since.

BH: When’s the next album coming out?

Brian: Soon! Our new album Love is A Lie, Filth is Eternal is finished and ready. We hooked up with Heavy Talent for booking in the US, and Doomstar in the EU. Quiet Panic is managing for us now, we’re just shopping to a couple labels and it’ll be out.

BH: Who would your dream collaborators be to drop in and play a set with?

Brian: Oh, man. That’s a good question. Collabs are hot right now. I’d def do a collab release with Haunted Horses, we’ve talked about that. Outside of them bois, I’d work with Pink Void or Bloom Offering in Seattle, or someone like Haxan Cloak, that would be a blast. 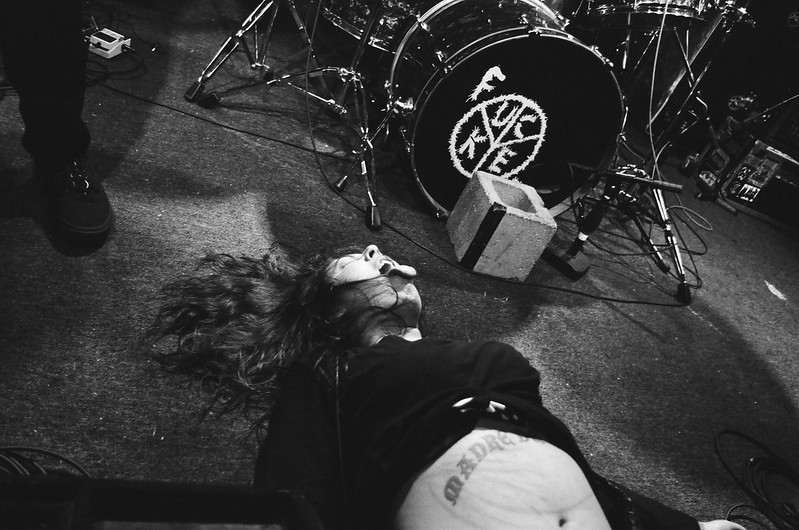 Liked it? Take a second to support Two Thangs on Patreon!