Danielle Freiman is an artist living in Somerville who creates a variety of work. She’s particularly intrigued by narratives created by the interaction of people with objects and between objects themselves. She studied in the Studio for Interrelated Media at Massachusetts College of Art and Design. She’s a magical human all around and I was happy to sit down with her and ask her a million questions about her art practice!

What media do you usually work in?

I am an interdisciplinary artist; I work mostly in small-scale assemblage and installation, and most recently I’ve been making zines and wearable pieces.

You often make jewelry out of these assemblages; what intrigued you about wearable art?

My aunt Susan owned her own business making jewelry, and would create small assemblages inside of small shadowboxes; she taught me how to arrange pieces into frames. The wearable pieces feel like an extension of the larger assemblages, but can be held and also worn close to the heart. 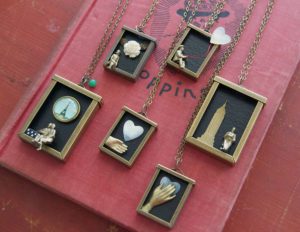 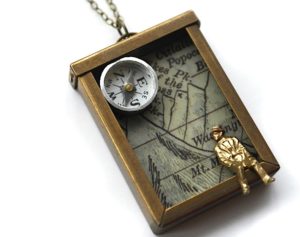 Are there certain elements or images that you’re more drawn to?

I’m interested in objects and how we associate our memories with objects; the narrative of objects. I’m drawn to the concept of alchemy, which in this circumstance is the relationship between objects. I’ve been organizing objects neatly recently in a process called “knolling,” or arranging things in right angles with even spacing. When I put certain objects together, they create a narrative with each other even if they’re not from the same decade or the same material. I’m usually looking for this kind of alchemy when making an assemblage.

The concept of alchemy is really interesting in an art practice.

Yes, especially in the these arrangements because that’s what I was doing before I knew that it was a thing. I realized this is something people do, often found under #thingsorganizedneatly. I call it “sentimental knolling” because they’re all my objects I’ve collected. It allows me to experiment with narrative and alchemy and creating arrangements that make sense visually.

Tell us about Good Habits and how you got into zines…

Good Habits began as a band name I created; I thought it’d be cool to have a made-up band with three albums and an EP. I never started the band, but I was making work that wasn’t necessarily conceptual but it wasn’t ignoring my art practice either. I wanted a way to encompass the variety of mediums I was working in; jewelry, zines and the Radiant Friendships Tour, so I started making work under the Good Habits name. I wrote a manifesto for Good Habits which is: “putting out fires, setting intentions, making zines, making friends.” Everything I make is related to those four facets of Good Habits – those are good habits to me. The zine is an shareable extension of the manifesto – Vol. 1 and Vol. 2 will be available at Black Market.

The radiant friendships tour started as a personal need for me to hang out with my friends more in an intentional way. As a more introverted person it’s very easy for me to stay home, and I wanted something that would hold me accountable for making plans and calling people back. I came up with The Radiant Friendships Tour and I wrote a Radiant Friendships manifesto, which is featured in Good Habits Vol. 1. It’s an ongoing project and I don’t have any guidelines for how interactions develop, but at the time it gave me the opportunity to live more outwardly than I would normally.

You’re doing an artist residency at Have Company; could you tell us what you have planned?

In the spring I’ll be visiting Have Company, which is a shop and gallery space in Grand Rapids, Michigan. I’d like to host a manifesto-writing workshop, talk about setting intentions, and making zines. I think that it’ll be really cool to meet like-minded people in a place I’ve never been and make connections with people working in similar mediums. 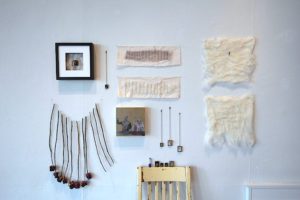 Good Habits Vol. 2 will be out soon, and I’ve been making buttons. I’d like to continue making work that can very easily be shared and mailed. I think with that in mind it’ll determine the medium of the work that I make going forward.

Catch Danielle at the upcoming Black Market on Feb. 21st 2016. Follow her work on Instagram @_goodhabits_  and see what she’s up to with Have Company @havecompany this spring!