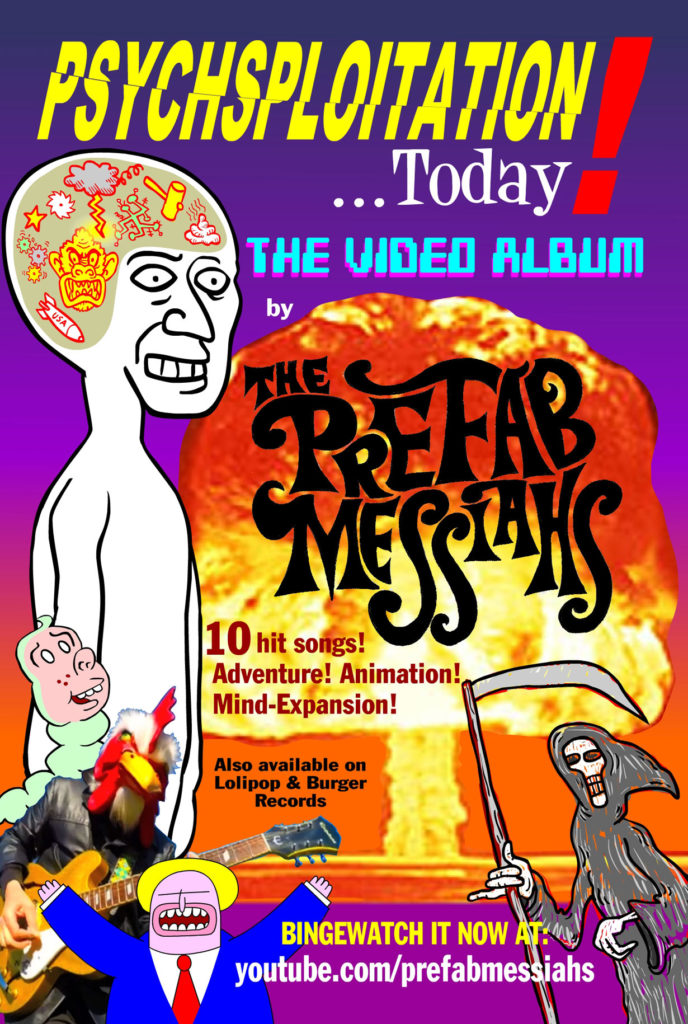 As an art form, the music video is in a curious place. There’s a sense in mainstream circles that it’s a dead art– or, at least, an inessential one– hastened in no small part by its erstwhile patrons at MTV (the M of which, last I checked, stands for “Mom, Teen variety”). This is, of course, ridiculous; millions of people use Youtube as their primary source of music, even if the attached “video” is simply a procession of poorly transcribed lyrics. More to the point, plenty of artists– largely independent ones– are keeping the medium alive with bold, terrifically inventive music videos.

Such is the case with The Prefab Messiahs. For their new album, the politically tinged Psychsploitation Today!, the local garage-pop legends took this premise to the extreme: in addition to its traditional releases on CD (on Lollipop Records), cassette (on Burger), and digital download (hit up their Bandcamp), the record is available to view as a “Video Album” on Youtube. Not content to simply upload the audio, lead singer (and animator) Xerox Feinberg created a fully fledged original music video for each song on the album. I spoke to Xerox about the album’s construction, the future of music video, and the nightmares of Alice in Wonderland.

BOSTON HASSLE: How did you come to release this as a video album?

XEROX: What’s the “best way” to release music these days? Some streaming service? Vinyl? Youtube? None of the above? Trying to create a complete audio-visual experience seems as good an idea as any. From The Monkees to MTV (and long before and after), people have been experimenting. Our new songs all have a basic media-mind-oversaturation theme that lends itself to this kind of treatment. Also, in my supposedly real life I’m an animator. So I always wanted to make original videos for all the songs on the album, and ultimately edit everything into one big “movie.” We weren’t even sure what to call it, but we settled on “Video Album.”

BH: Each song in the album is represented in a distinct style, ranging from live action to found footage collage, as well as several different styles of animation. How important was it to you to make each video different, and how did you choose the style for each song?

X: I used a grab-bag of video styles to echo the grab-bag of music on the album, but also as a matter of time, energy, inspiration, and serendipity. Animation is a real time suck, so sometimes I mixed in all sorts of visual cheats and counted on lucky accidents; other times I really sweated the details. The goal was to capture some unique aspect of each song, but that’s a wide target. “Sometimes Sunnydaze” features me running around in a chicken mask, shot partly from underwater with drummer Matt Horn’s go-pro camera. Wormtown scene legend L.B. Worm randomly caught us at a ridiculously empty show in Worcester years before, but I chopped it up and mixed it with old 1960s concert footage for the phony-vintage look of “Having a Rave Up.” I used a lot of found footage and collage just because I wanted to try to reflect the sensory bombardment and confusion in the songs. If lawyers ever get involved we’re gonna be screwed.

BH: What were some of the influences you had in mind while creating the videos?

X: Each song has a distinct feel, from garage fuzz mindfuck to dreamy blur to power pop. For “The Man Who Killed Reality,” a dystopian Sgt. Pepper-ish feel seemed appropriate. “Monster Riff” calls up monster movie magazine art, Scooby Doo mystery cartoons, and black light posters. “Outtayerhands” is an alternate reality James Bond movie title sequence. I was mostly just hoping to blow people’s minds on the cheap! I also tried to unite the songs with recurring images and characters, including the brain-tormented figure from the album cover.

BH: How did you get into animation? Do you find your animation work informs your music, and vice versa?

X: Alas, I’m one of those people who was always cursed with the desire to draw cartoons to express themselves. I was part of a pretty haphazard underground comix zine scene in Boston years ago, starting alternative publications and working at local newspapers. (That used to be a job.) Animation was always a dream, but was hard and expensive to get into until suddenly — with a desktop computer and some fairly cheap software — you could make your own stuff move. That led to me to New York and having sort of a career for the first time in my life. Music has been impacted by technology in the same way — anybody can record now. (Of course, that’s the good news and the bad news.) I put music aside for years, except for animation projects, but I always hoped to get back to it, and thanks to The Prefabs I have. Ideally, I see both animation and music as part of the same thing… creative tools useful to get some idea or spirit across, hopefully to other human beings.

BH: We seem to be in a sort of weird period right now, where many people are primarily consuming new music via Youtube, yet music videos still haven’t quite regained the cultural significance they had in the heyday of MTV. Do you see that changing? Where do you see the medium headed in the coming years?

X: I wish I knew. Watching music is definitely a different experience than listening to it. There have always been people who swear videos are an “un-pure” bastardization of music. We’ve all seen lots of horrible, mindless, uselessly commercial music videos, but even those eventually gain some historical value. Given technology, there’s no reason why there can’t be visuals available with music. If you don’t wanna look at all the flickering lights, you don’t have to. The real question is… how do you get anybody to pay attention in a universe of cat videos?

BH: Finally, as a connoisseur of strange movies, I have to ask about the “Alice in Wonderland” footage in the video for “Gellow Mold.” What’s the story with that, and how did you find it?

X: Yeah, that one was fun to mess with. Basically, all I did was google. One Alice is a version from 1903 and another dates from 1915. Very weird, degraded (and often tedious) stuff that I chopped up and overlaid with psychedelic bubble footage, Vietnam bombing runs, industrial films and jello commercials. Voila!