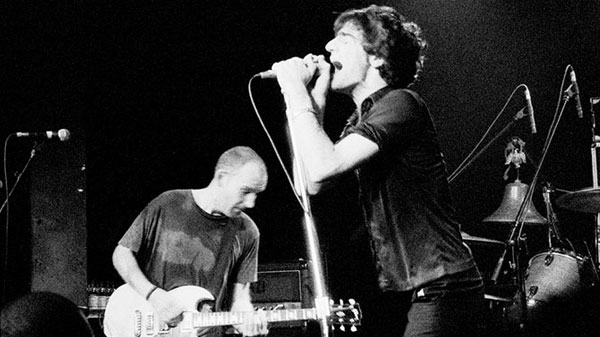 Early in Jem Cohen’s collaborative document of the legendary Washington D.C. band, Fugazi, Ian MacKaye describes the band’s name as “a quite beautiful word and left open to interpretation.”  This is at odds with some popular concept of MacKaye and his work.  Persistent in musical discussion is a view of MacKaye, Minor Threat, and ergo Fugazi as paragons of self-important, judgmental, harder-core-than thou punk.  As far as the earlier work with Minor Threat goes, the reputation may be earned, but is kind of a separate discussion.  Then there’s punk itself, a term which often conveys judgement or derision.  Like many cultural signifiers it’s a distinction rife with vague and contextual meaning across a variety of fields that is also extremely difficult to pin down.  In music alone, punk applies to the Stooges, the Dead Kennedys, and Sum-41.  Thus one feels nothing is being communicated, that through over-saturation the terms lose their meaning.  What might have begun as energetic and vital becomes adolescent and corny.  Then you move on, and you grow up.

But I wonder about punk all the time.  I wonder how to accurately express a certain devotion without sounding like a fucking corn-dog.  Somehow, well after the cause and effect story of punk has long since been put to bed, kids keep getting into punk.  In some way it has always donned the perennial garb of the outcast club; a paradox only funny in retrospect.  Punk also functions as micro-community, a first acknowledgment of a slightly dilating perspective, played generally loud and aggressively.  There is often a definite youthful association, a moment of discovery or decision.  We learn, in time, to mock our own earnest natures, but what was this but treating art seriously?

Instrument (1999) drops us into a hazy din.  “We’re Fugazi from Washington D.C.” says MacKaye, and we hear drums kick in.  Band members and audience appear in flashes and blurs of heat, motion and perspiration.  Bodies are like disconnected points of sound or kinetic energy.  They dance and weave, link, mesh and break apart.  The song builds and subsides.  While there are bits of interview and exposition, Cohen’s film, with the band directly involved in the editing, is more concerned with feeling.  Through travel, performance and rehearsal Cohen places us as close as possible to the noise and energy of Fugazi.  We jump around in time and sound bleeds across scenes, but there is an almost constant Fugazi soundtrack.

I can’t really imagine this piece for non-fans.  Though it creates a  quasi-impressionist portrait of a constantly touring band’s creative process, it is entirely involved in the culture of Fugazi.  Cohen, a childhood friend of MacKaye, shot the band since their 1987 inception.  He describes a ploddingly organic development of not even discussing the prospect of a feature until they were six years in.  By the time they were assembling footage, nearly a decade had passed.  It is an extremely deliberate perspective on a band that singer-guitarist Guy Picciotto describes as necessarily restless.  His comments humorously invoke Woody Allen’s assessment of a relationship as a shark, but the sentiment is real, and what, after all, is a band but a collection of long term relationships?

Instrument is not the story of Fugazi, but simply a prodigiously detailed glimpse of the band in action.  As such, it discards narrative convention while instead constructing a portrait open to interpretation.  Cohen and the band do less telling and more asking.  They want to engage their audience by elucidating various facets of the music.  Much like the largely improvisational shows Fugazi played, the film evolves without a setlist to tether it.  In a funny way, the document seems to consider its material and go with what feels right.  Some sections are stretched and dissected, such as the band manipulating tape speed and guitar feedback in the studio.  Other features are curtly or flippantly dispensed, like media fixation on the group’s market-critical business practices and near-mythic hardcore-ness (related in an hilarious anecdote about belief that the band lives in a group home and eschews the comforts of heat).

Because the film tends to meander there are moments of transcendent, and bracing beauty that seem to surface unexpectedly.  In an almost outrageously unadorned appearance on a middle-school public access program MacKaye and Picciotto discuss their work with disarming earnestness and candor.  The songwriters display an absolute lack of condescension or sarcasm.  The precocious host enquires after a curious lyrical aphorism, “America is just a word but I use it”.  The interviewer has no motive or agenda, she is plainly curious.  MacKaye, who we’ve seen be cagey and distrustful in interviews, rises enthusiastically to outline his view of the strictures of language and the untapped potential of personal redefinition.  We are treated to seemingly accidental, off-the-cuff philosophy if we catch it.  And this is really the enduring (and endearing) appeal of the band, and maybe the better ideals of punk; a fresh and unpretentious obligation to create a better version of experience.  Watching Instrument as an adult, you recognize that it’s not always that the bands got worse or the ideas less potent. Sometimes you just stopped paying attention.