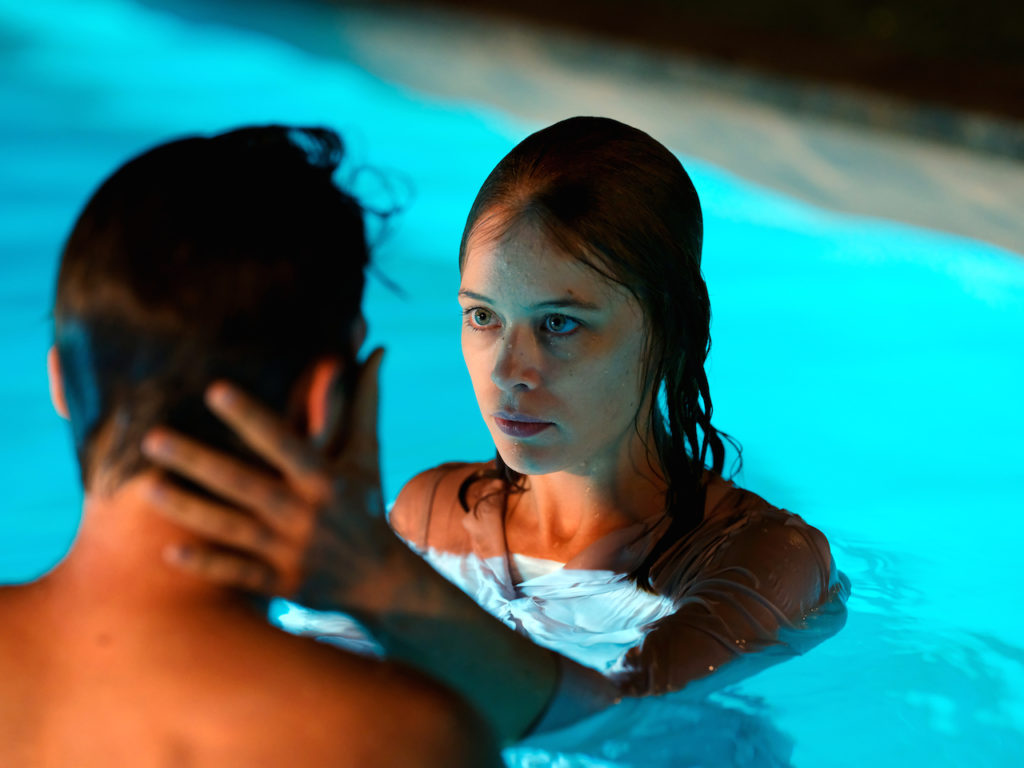 First things first: the undine (sometimes spelled ondine) is a mythological water spirit which pops up frequently in poetry and literature throughout European literature over the past few centuries. Traditionally, the undine is a comely young maiden who lives in the water, periodically emerging to seek a human lover, which in turn will grant her a soul. The undine has inspired numerous classic stories, notably Hans Christian Anderson’s The Little Mermaid (the mermaid can perhaps be classified as a subspecies of undine, along with such lesser-known water nymphs as the naiad and the nereid). As is often the case in folklore, the specifics vary, but in general the story of the undine is one of mysterious longing, tinged with death.

It’s worth establishing this bit of forteana going into Christian Petzold’s Undine, because without this information, you could go through much of its running time without realizing that you might be watching a tale of the supernatural. Actually, I’m still not sure if it is; the boundaries between phantasmagoria, metaphor, and unreliable narrative do tend to be porous. What I can say for sure is that Undine is a haunting, occasionally opaque love story with a surprisingly human core.

Paula Beer plays Undine Wibeau, a beautiful young tour guide at the Berlin museum of architecture. When we meet Undine, she is in the act of being dumped by her boyfriend, Johannes (Jacob Matschenz), at the museum cafe. Holding in tears, Undine informs him that if he isn’t waiting for her at the cafe when her shift ends in thirty minutes, she’s going to have to kill him. He doesn’t stick around, but before she can enact her revenge she meets-cute with handsome industrial diver Christoph (Franz Rogowski) under a smashed aquarium (no one, not even the harried cafe owner, seems to question that the tank seems to shatter of its own volition as Undine stares at the miniature diver figure). The two spark a sweet whirlwind romance, and Undine is happy, albeit vaguely haunted. Then tragedy strikes, followed shortly by some unexplainable phenomena. I’ll stop there, both because I don’t want to spoil the story, and because I’m not sure I could succinctly describe it if I wanted to.

The plot of Undine is fairly straightforward, but the story is extremely difficult to accurately convey. The description above probably gives the impression that this is a spooky tale of the supernatural, but it really isn’t. No one would program this film in a Halloween marathon, and if I hadn’t spent my childhood with my nose buried in books of the unexplained (and collecting the amazing Monster in my Pocket toys) I’m not sure how much I would have picked up on. Yet it would also be a mistake to portray this as a conventional romance. Even before strange things start happening (and they do) there’s something essentially unknowable about Undine. When she’s in love, she radiates warmth and happiness, but in the moments in between, she seems to regard her life with a sort of quizzical analysis. When she tells Johannes she’s going to kill him, is she being hyperbolic? Beer plays her mysteriously enough that we’re left guessing, but engagingly enough that we want to keep trying.

“Mysterious” is really the key word here, as Petzold seems intent on telling a more inscrutable story than can be laid out on paper. Undine’s day job is not just a character detail but a central element of the film; whenever she clocks in, we are treated to a full lecture on the history of architecture in pre- and post-split Berlin. I’ll admit that I’m perhaps not well enough versed in the subject to fully appreciate the ways in which these facts interact with the story, but they do effectively contribute to the sense of place and mystery. Undine spends much of the film traveling through the city, with Christoph and alone, on foot and by public transportation. One gets the sense that her knowledge of the city’s ever-changing facades and boundaries goes deeper than her professional calling; it’s almost as if the city is a part of her.

Undine is a strange, oblique little film, and it’s possible that some viewers might lose patience with its long silences and meandering story. I, however, found it entrancing. This is only a ghost story in the most oblique sense of the word; weird things do happen, but they’re often not the focus. Rather, it’s almost as if the movie is the ghost, speaking to us from a distant, murky world. Yet, crucially, it never quite crosses the line into fussy obtuseness, of which I’ve had just about enough lately. Undine and Christoph are both likable, engaging characters who feel like they might exist in the real world, mysteries and all. Like its titular spirit, Undine flits around the edges of reality, but casts a bewitching spell. Just be careful the next time you go skin diving.