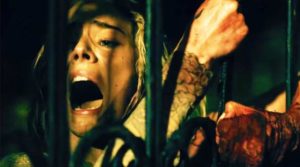 “Man is the most dangerous animal of all to kill.”

The quote’s from The Most Dangerous Game, by Richard Connell, and it’s true. The story is probably one of my favorite short stories of all time. If you don’t know it, it chronicles a big game hunter’s fight for survival when he himself is hunted by a Russian aristocrat after being stranded on an island. The hunter, ironically, becomes the hunted, and suddenly the civilized becomes a “beast-at-bay.” When push comes to shove, man will do whatever it takes to survive. That’s what makes man the most dangerous animal of all to kill, right?

Manhunting in cinema has long been explored, thanks to Connell’s chilling narrative, originally published in January of 1924. It’s been seen in paranormal-themed television, too—The X-Files‘ “Home” and Supernatural‘s “The Benders”—both of which drive home humans are scarier than the supernatural.

After a recent re-read of The Most Dangerous Game—having not read the classic since eighth grade—I look at some of my favorite horrors and realize how much of an impact the story has had on horror cinema. It’s posed the question, what makes man scarier than any monster?

READY OR NOT (2019)
DIR. MATT BETTINELLI-OLPIN AND TYLER GILLET 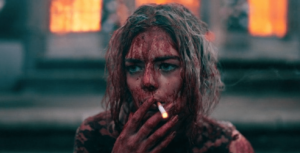 One of my most adored flicks in recent memory, Ready or Not is a gore-drenched thrill ride from start to finish. Grace, a former foster kid with no ties, marries into the absurdly wealthy Le Domas family. Her fiancé, Alex, failed to tell her that every time a new person marries into the family, they must play a game the night of the wedding. If they draw the Hide and Seek card, they’ll be hunted down by the Le Domas family and sacrificed to Satan before the sun comes up. Unfortunately for Grace, she doesn’t have the greatest luck, and is hunted throughout the night by her in-laws using medieval axes, guns, cross-bows, and daggers. Tearing off her wedding dress, donning some yellow Chuck Taylors, and slinging ammo around her shoulder, Grace goes from 0 to 100 as she catapults into survival mode. Thinking Alex’s meek bride will be an easy kill, the Le Domas family gets a wake-up call when they realize she won’t go down without a fight.

The coolest thing about this flick is Grace’s descent from insecure, eager bride to enraged, blood-slick badass who bludgeons her mother-in-law to death with a wooden box, leaving only a gorey pulp in her wake.

The OG Hunger Games that scared the shit out of me as a child, Battle Royale is brutal and not for the faint of heart. Fukasaku’s flick, based on the 1999 novel of the same name, follows a class of Japanese schoolchildren who have been picked for the annual Battle Royale, a government act created to curb misbehavior among kids. The children have three days to hunt down and kill each other until there is one sole victor—those who don’t cooperate will be slaughtered by explosive collars placed around their necks.

The film offers a unique take on the “humans hunting humans” angle—it’s about kids, like some weird, twisted version of Lord of the Flies. Not only that, but it analyzes the eerie horror of what humans are willing to do in order to ensure their own survival—they’ll tear each other apart to win. 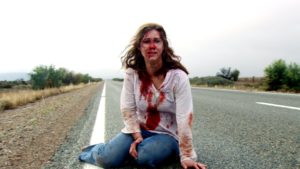 In the Australian outback, no one can hear you scream.

Wolf Creek finds three foreign backpackers, Liza, Kristy and Ben hunted down and tortured by psychopathic killer Mick Taylor in a horrible cat-and-mouse nightmare in a fight for their lives. Wolf Creek preys on the trust that we have for one another, and how sickeningly disturbed man can be when they’re hungry for the chase of a hunt. Mick Taylor is a horrifically frightening antagonist that takes “backwoods creep” to another level. 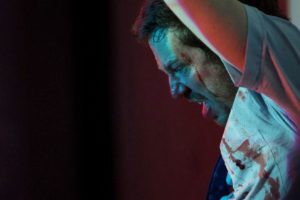 Another notable horror by director Greg McLean, The Belko Experiment echoes that of Battle Royale. Eighty American office workers are locked inside their company one morning after coming into work and are instructed to begin slaughtering each other; thirty employees must die or sixty will be killed. Mike, one of the office workers, is tested, as he believes there should be no killing, while his boss, Barry, is out for blood.

Like Battle Royale, it analyzes the pure savagery of human behavior, intelligence, and heightened aggression when faced with the possibility of death. 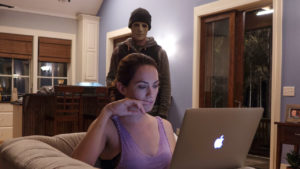 Young novelist Maddie Young, both deaf and mute, moves to a remote cabin in the woods to focus on her writing. One night, a masked killer begins stalking her like prey; stealing her phone, taking photos of her, and breaking in without revealing himself or attacking her. As Maddie realizes she is being stalked, the killer cuts the power and cuts her car power to prevent her from escaping. When he does reveal himself to her, he taunts that he can come inside any time he wants to—he wants to slowly hunt her down and watch her try and fail to escape.

All of these films echo The Most Dangerous Game in some way—they analyze the depravity of human behavior and reveal what we are truly capable of if pushed. What makes man scarier than any monster is that man looks like you, like me. Humans are the people we pass everyday on the street. They’re your coworkers, your classmates, maybe your in-laws. These movies illustrate the fact that no matter who these people are, they are capable of tearing you—or each other—apart. That, my friends, is what makes man the most terrifying monster.

Ready or Not
2019
dir. Matt Bettinelli-Olpin and Tyler Gillet
94 min.