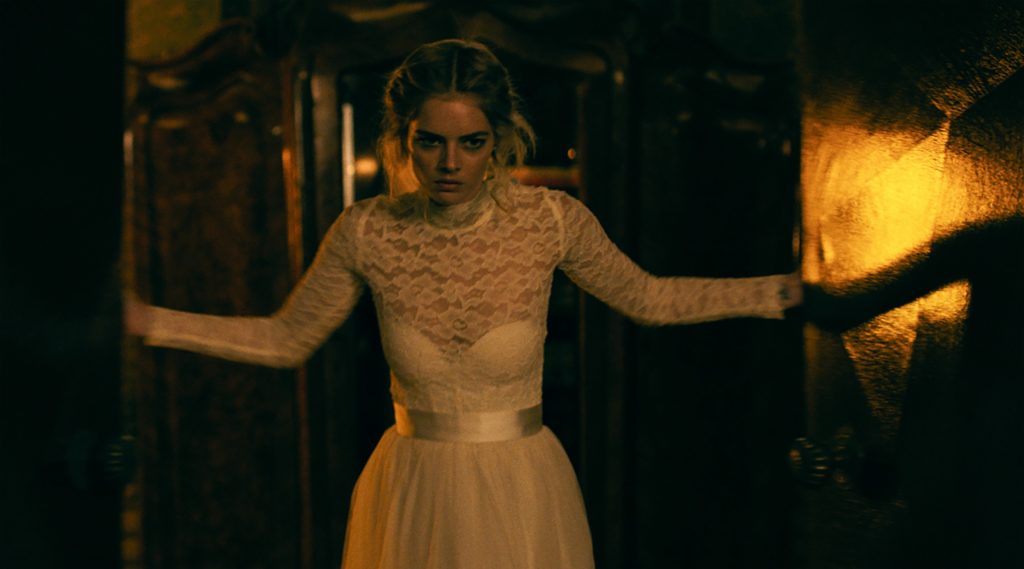 While attempting to determine the dumbest news story of the month in 2019 America is pretty much a losing game at this point, one could do worse than to pick the feud between President Donald Trump and horror movie powerhouse Blumhouse Productions. The flashpoint, of all things, was The Hunt, a timely, seemingly jokey spin on The Most Dangerous Game from filmmaker (and Homestar Runner co-creator!) Craig Zobel in which a group of red-state “deplorables” are hunted for sport by a cadre of “liberal elites.” As satire goes, The Hunt sounds pretty simple (and honestly would seem to skew more conservative than liberal), but that didn’t stop various Fox News pundits from decrying it as “racist” (against white people, naturally) and “dangerous.” Like clockwork, these talking points were parroted by the network’s biggest fan, and within 24 hours Universal had pulled the film from release. Like so much in the past few years, this story is both chilling in its implications and profoundly, hilariously stupid. But the really odd thing is that the whole controversy overlooks the other darkly satirical humans-hunting-humans thriller out this month. And while Ready or Not doesn’t seem to hit the same nerve inexplicably struck by The Hunt, it’s every bit as withering in its view of the class struggle at the tail-end of the 2010s. It’s also a devilishly sick bit of poison popcorn, and a hell of a lot of fun.

Samara Weaving stars as Grace, a young woman on the eve of her wedding to Alex (Mark O’Brien), heir to the Le Domas board game dynasty (“We prefer ‘dominion,’” he deadpans, in such a way that you can’t quite tell if he’s joking). Grace is thrilled, both to spend her life with the man she loves and to find a home in his large, moderately eccentric family. The Le Domas clan (presided over by Henry Czerny and Andie McDowell as Alex’s parents, both clearly relishing their heel turns) are the bluest of bluebloods, fiercely protective of their name and image and beholden to generations of tradition. Alex refrains from springing the most curious of these traditions on Grace until after the ceremony: each new addition to the family must agree to play a game at the stroke of midnight, as decreed by a card dispensed from an ancient puzzle box. Most of these games are fairly innocuous– backgammon, say, or Old Maid. If the card reads “Hide and Seek,” however, the bride must be ruthlessly hunted with an arsenal of antique weapons, then sacrificed at dawn on a blood altar to avert a curse which will, supposedly, rain certain doom upon the Le Domas family. Spoiler alert: Grace does not pick backgammon. 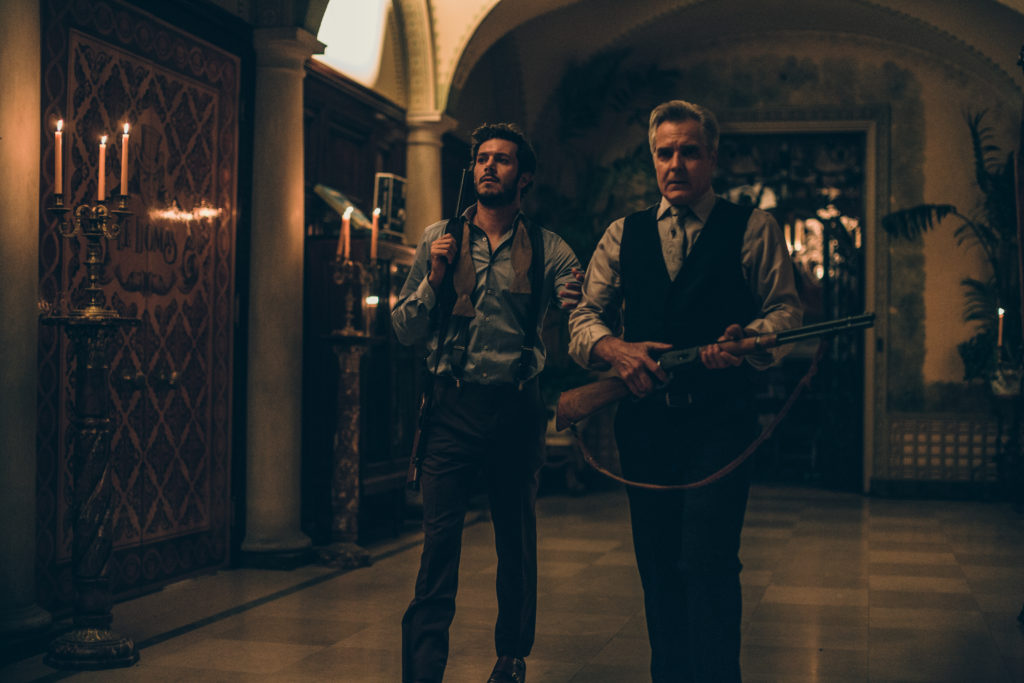 Adam Brody and Henry Czerny in the film READY OR NOT. Photo by Eric Zachanowich. © 2019 Twentieth Century Fox Film Corporation All Rights Reserved

If all of this sounds silly to you, it is: directors Matt Bettinelli-Opin and Tyler Gillett (known collectively, along with producer Chad Villella, as Radio Silence) lean into the absurdity, mixing their Most Dangerous Game premise with knowingly pulpy extravagance and a dash of ‘80s style Satanic Panic. With their mix of upper-class pomposity and casual bloodshed, the Le Domas family calls to mind a rich tradition of blackhearted drawing room farces, from Kind Hearts and Coronets to Clue. Yet for all their aristocratic affectations, the Le Domases very much representative such modern, airheaded elites as the Kardashians– or, for that matter, the Trumps. One of the funniest conceits of Ready or Not is that most of the Le Domases are just as out of their league when it comes to murder as Grace is; hapless brother-in-law Fitch has to sneak into the bathroom to look up “Getting to Know Your Crossbow” tutorials on Youtube. No one really wants to hunt or kill Grace, and the sense, at least among the younger generation, is that the “curse” is probably bullshit. Yet they continue, because, when you’re that rich, family tradition takes on outsized importance– no matter how horrifying.

And make no mistake: as funny as Ready or Not is, it doesn’t pull any punches. When things start going south, they do so dramatically– and graphically. One running gag introduced early on involves the messy, accidental deaths of the help staff (“She was my favorite,” a family member invariably murmurs, with the tiniest amount of human empathy). Weaving, for her part, is put through the wringer, taking nearly as much of a licking as Bruce Campbell in a typical Evil Dead installment. Yet, as much abuse as Ready or Not heaps upon its heroine, it somehow manages to avoid feeling cruel or fetishistic in its violence. Much of this due to Weaving’s performance, which establishes Grace as a human, likably profane character who you can absolutely believe as a smart, resourceful alternative to the “final girl” (refreshingly, Alex remains a hilariously ineffectual presence, literally sidelined while Grace takes matters into her own hands). Like Jessica Rothe in 2017’s immensely entertaining Happy Death Day, Weaving’s Grace represents a new strain of horror protagonist: tough, openly flawed, and unapologetically female.

Does Ready or Not enter the modern canon of so-called “elevated horror?” Not quite; its third act occasionally shuffles cards when it should be building to a crescendo, and its expansive cast of characters is so winningly performed that you almost wish you could get to know them a bit better amidst the breakneck pace (in both of these regards, it falls somewhat short of Adam Wingarde’s brilliant, thematically similar You’re Next). But in a summer dominated by flaccid reboots and bloated franchise entries, Ready or Not is a jolt of gleefully nasty electricity, snappily written and merciless in its delivery. In the end, there’s something immensely satisfying in seeing a bunch of shitty rich people get what’s coming to them in their mansion. Even in these troubled times, that much seems universal.