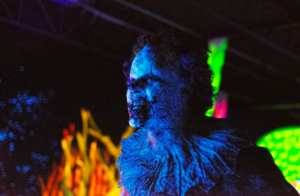 THE STREAMER: Amazon Prime and Netflix

Think of a time in your life when you’ve experienced something involving a clown.

Was it in a film or at a birthday party when you were a kid? When you went to your town’s traveling summer carnival? How about the first time you heard the story of John Wayne Gacy? Or, was it when the infamous 2016 clown sightings and attacks were all over the news, and murderous clowns were appearing everywhere around North America?

Whatever it may be, think to yourself—did it frighten you?

I’m going to gather that, yes, in some way, it unsettled you at least a little. Clowns have a long, notorious history of scaring the hell out of us. In an interview with Time magazine, Frank T. McAndrew, a professor at Knox College, pointed out that even dating back to the medieval ages, clowns and jesters made fun at people. Their job was to unsettle those around them. They’re “designed to make people uncomfortable and afraid.”

While intended to bring happiness nowadays, they often bring the opposite. Some of the biggest clown characters in modern film, from The Joker to Pennywise, bring more malice and murder than joy and laughter. There are endless films that take the common phobia of clowns and use it to scare the audience, but what makes them so successful in scaring us?

What makes us afraid of clowns?

Let’s take a look at two films (and clowns) and how they execute this fear in a horrifically—and terrifically—gruesome way. 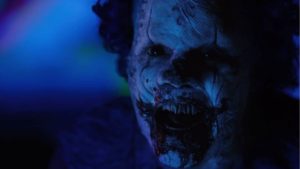 This is one of those films where you sit back and take a deep sigh after it’s over, eyes wide and palms sweaty. Produced by notorious Bostonian director and Splat Pack member Eli Roth (of Hostel and Green Inferno fame), this is not a flick for the faint of heart.

Clown follows realtor Kent McCoy (Andy Powers), a dedicated, doting husband and father who steps in when the hired clown for his son’s birthday fails to show up. After discovering an old clown costume in the basement of one of the houses that’s on the market, Kent slips it on and gives his son the fun birthday he deserves. When Kent falls asleep after the party’s over, he finds to his horror that the costume is melting into his skin, and it refuses to come off.

After meeting Herbert Karlsson (Fargo and The Big Lebowski‘s Peter Stormare), the previous owner of the suit, Kent learns that the clown costume is the hair and skin of an ancient European demon, and he is slowing morphing into it. As Kent slowly loses it while the costume consumes him, he learns that there is no way to get the costume off naturally. Karlsson explains that the only way to get the costume off is for the wearer to eat five children, or for the wearer to be beheaded.

Clown digs deep into our inner psyche and our phobias of clowns—Kent’s body is literally being torn apart and distorted when he puts on the costume, going from someone we can trust (a nurturing family man) to someone we certainly cannot (a child-eating demon). 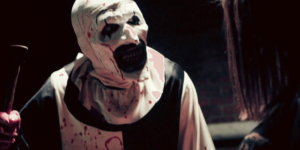 I remember stumbling across Terrifier as a short exploitation film on YouTube in the early years of high school. I was shocked—at its creepiness, its raw brutality, and its unabashed bravery to show anything and everything (and I mean everything). It follows Art the Clown (played with unfathomable malice by David Howard Thornton), a silent, supernatural, serial-killing entity that gets his kicks by killing people. His gruesome stalking and killing of his victims occur on Halloween night. With a horrifically unnerving black-and-white getup, pitch-black, long, razor-sharp teeth, and a love of murder, Art has earned a spot as one of the most feared clowns in modern cinema.

The film echos the gritty, bleached aesthetic of Grindhouse flicks of old, which, I think, makes this film all-the-more scary. With its bizarre storyline and abhorrent content, the short film brings back the glory days of cheap, good horror. For a low-budget short film, it was impressive—and, despite being disturbed out of my mind—I hoped that there would be more from newcomer Damien Leone.

Since then, there have been two feature films, All Hallow’s Eve in 2013 and a full-length Terrifier in 2016. Both have lived up to the slasher-filled goodness of the original short film, with Terrifier especially being a punch to the gut.

2016’s Terrifier spins the grisly story of Tara and Dawn, two women going home from a party on Halloween night. Drunk, they go to a pizza cafe, where they meet Art. He sits in the booth beside them, grinning and distorting his face at the girls, until Dawn is unnerved and barks at him to get lost. He is thrown out of the restaurant, and soon after, the girls leave, only to find that Tara’s tires are slashed. Art soon returns to the pizzeria, kills the two workers inside, and takes Dawn hostage. Throughout the night, Tara works to rescue Dawn and stay alive, as Art rampages through the night, slashing and torturing anybody he comes across, whether they’re in his way, or not. Yikes.

The scariest thing about Art is his overtly jovial attitude and lack of voice, despite having a face splattered and smeared with blood after committing a heinous act. He’ll dance, he’ll laugh, and he’ll point with glee at the character he just cut in half. He enjoys everything about killing—which draws us back to the question as to why we’re afraid of clowns.

Art acts jovial and is dressed to match that attitude, but he’s doing horrific things. We, as the audience—like Dawn and Tara in the opening scene at the restaurant—are thrown off by this distortion. When we see him in this scene, we know nothing about him. Who’s the man behind the creepy makeup? Is he actually happy, or is it an act? Is he really smiling, or is it all fake? Since we can’t see his face, it distorts who he really is. The mind doesn’t like unnatural distortion and manipulation of the body; we like and trust what we know.

What can we learn from films like Clown and Terrifier?

We’re scared of clowns because when we see any sort of unnatural distortion of the human body—such as the exaggerated painted-on smiles and the big red noses—we don’t like that it masks the identity and true intention of the person wearing the getup. It doesn’t look like any other human, and that makes it threatening. To make matters worse, the clowns presented to us in modern cinema often have a sinister touch to their getup—whether it be through scars, large and sharp teeth, or smeared makeup. We can’t figure clowns out, and that causes distrust.

Humans are naturally afraid of the unknown, so when they can’t be sure of who is behind all that jovial makeup and what their true intention is, our instinct is to be terrified—which makes clowns the perfect villain to do the job.