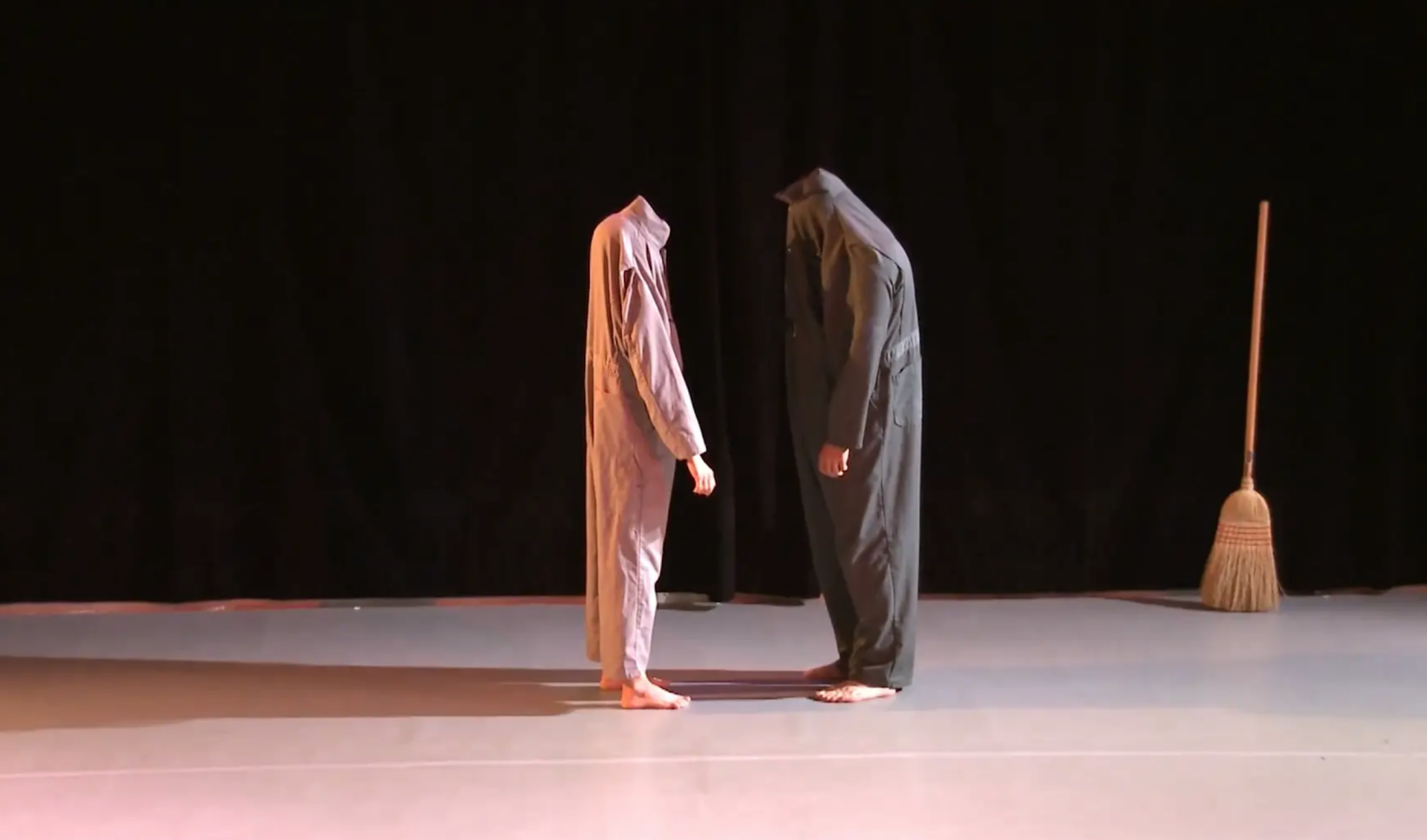 I spoke to interdisciplinary artist Daniel Davis about An Evening of Various Bodies for the culmination of his creative residency at the Studio @ 550 in Central Square. Two movement compositions contemplated human relationships, including people to past, interpersonal relationships, and the dynamics that exist within a single body.

The first piece, Rhythm Reclamation Exorcises, Study #3: Spectral Sketching, was a three part structured improvisation motivated by the rhythms of coming together and coming apart. While constructing the piece, Daniel Davis and Anna Maynard asked “How can we invite images and textures from our past to show up?” and so was born Spectral Sketchings.

Davis and Maynard sat in plain clothes across the room from one another. The piece began ambiguously with glances between them. They looked with the awkwardness somewhere between expected and genuine meeting. Maynard eventually stood from her seat to begin a dance in the center of their chairs, showing off her moves. She sat, and Davis replaced her in the center of the space, building his own showcase. From there they took turns watching, dancing. In their dances we saw their movement personalities and their stylistic references. Speaking to Davis, he told me that the piece explores the different rhythms and timings that come into play when individuals dance in solos and duets.

During the following more dynamic section, Davis and Maynard danced side by side, their intentions aligned but their choreography somewhat out of sync and reaching. They danced as if wanting to be together and teach each other, but also wanting to remain apart.

In conversation, Davis revealed that in this section he asked “can partners keep separate rhythms to influence each other without simplifying to sameness?” They watched each other and so maintained separateness; we watched as they sought to keep their exchange alive.

When developing rhythms in partnership, Davis refers to a variety of understandings of the rhythmic body, including his closest influence, contact improvisation (CI). “Post modern art-making threw out a lot of rhythm, control and a director,” says Davis, “rhythm has been connected to authoritarianism, and has become a tool of industrialization.” In an effort to respect traditions of rhythm while loosening his grip on social times and coordination, Davis engages patterns to create polyrhythmic realities where ambiguity, uncertainty and intensity are called forth.

A rainstorm, the digital soundscape, brought the piece to a close. Davis calls upon rain as a rhythm spirit that has more complexity than anything he could intend to produce. Rain as rhythm inspires Davis to wonder how rhythm is connected to our ancestry, our personalities, and the things we produce.

Like the rainstorm, the piece ended in saturation, finally coming apart. At first seated together, Maynard carried her chair around the room, finding a new place to sit and sing a song from her native North Carolina in a radio voice that seemed not to belong to her. Davis remained in the background. Both resigned and distant. The space now fettered by emotions of disconnection and longing.

I was interested in hearing more about the semi-conscious themes and feelings that colored the background of the piece. Along with their movement their relationship developed a mutual sense of playful friendship, competition, teacher and student, romance, bargaining, heartbreak and longing. Since Davis and Maynard had only been workshopping the piece for a few days before the show, I wondered if there had been a focus on certain aspects of relating or if these tropes of relationship had emerged on their own. Davis described that he and Maynard “simply didn’t work against the relational dynamics that emerge between a man and a woman.” It is interesting that Davis identified gender as playing a key role in the emotions they conveyed in their piece. And while gender need not always dictate the qualities present in a relationship, it is informative to experience different forms of partnering so that we can become aware of how our conditioning guides our expectations in relationships. 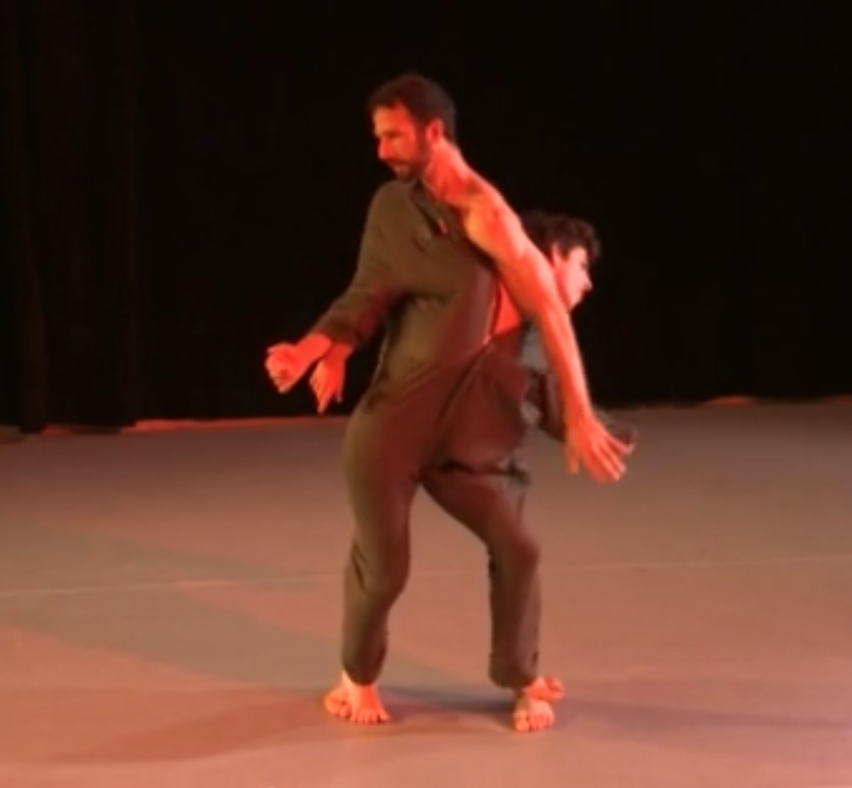 In the second piece of the night, many of the themes that felt oversaturated or unresolved in the first piece came to a cheerful release. The second movement composition between Daniel Davis and Caro Novella consciously “made space for other readings,” such as the many genders and desires that live in a single body.

The piece was conceived in 2015 during a CI intensive. Davis brought along an oversized jumpsuit and invited Novella to join him inside, “hey, you want to get in this with me?” From there a strange and unruly character was born. It was the explosive energy that interested them most; in the suit, their movements were hard to control and they could only sustain safe play for so long.

The piece began with a janitor, heavy and wobbling out on stage with a broom. The audience immediately began to laugh, an expression that set the tone for the reception of the entire piece.

Soon enough it became evident that the walking was made intense by the presence of two people inside the suit, only one head protruding. While at first coordinated as one intention, a second body grew more and more distinct from the first, wiggling and tugging in another direction. As they began to tussle within the suit, the intensity of two energies in a small space propelled them around the floor as if by subconscious forces.

Novella squirmed within the suit, evoking an image of an alien emerging from under the skin. Suddenly in an exhale, Novella broke out, the two bodies now witnessing each other naked in their own right. They sized each other up as if wondering where the next impulse would emerge from.

As they came back together in the suit they revealed just how much coordination was needed for simple movements like standing up. In contrast to their chaotic energy while wrestling inside the suit, followed by the both of them walking on their own, we now saw the concentration that made their coming together possible. They wrapped up the piece in their original role, sweeping and meandering in heavy feet.

An audience member described the movement as “the inner life of a janitor,” and “his coming out.” This read seems to align with Davis and Novella’s exploration, as they both arrived to the rehearsal process with an interest in seeking all of the pluralities within a person. Throughout the piece I saw clearly the coordination of many wills into one; scattering of the senses; conflicting desires; the process of hiding and seeking the self; the natural balance reached between energetic bodies; and the ways we look at ourselves in the mirror.

Speaking to Novella after the performance, I asked how they had become so comfortable being skin-to-skin inside the suit while also managing the risks that emerge during the dynamic sections of the piece. Novella described an initial release that was needed to get into the suit, but that in general all went smoothly. It was not until rehearsal earlier in the day that Novella was injured while doing a very simple movement in the suit with Davis, a single step led to a tumble on the knees. Davis added that this fall was out of the ordinary, and came to show them how “two bodies limit each other within the suit.”

Following up with the audience after the performance, Davis asked about how gender came across in the second piece. Davis had been specific about altering the dynamics of the performance to not hint to gender or sexuality but instead refer to the character they inhabited. The performers were nearly naked and had similar haircuts, which was revealed when they broke apart. As opposed to the first piece where gender seemed to play a larger role in the exploration of relationships, the second piece minimized the different identities of the performers and as a result maximized the story and interpretive possibilities.

It is easy to appreciate movement that is playful, exploratory and conscious of possibilities beyond individual experience. I celebrate the engagement between performers and audience members that took place following the show. Open conversations about what we witness in art will ultimately make our processes as creators and observers more empathetic, informed, and connected to wellbeing.