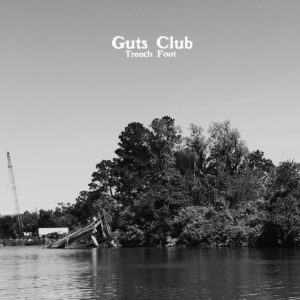 After two incredible, stripped-back folk records, Lindsey Baker’s project “Guts Club” has expanded into a full band with electric guitars. Taking advantage of this opportunity, her vocals are more slow and reserved, allowing surprisingly gorgeous melodies to shine through. It’s honest music. Self-aware and bitter, held together with the ghosts of country music’s past. The album is haunted with familiar pedal steel, billowing organs, and wavering guitar lines, setting the stage for Baker’s mesmerizing narrations of her memories. Listen to the collection of 10 songs and indulge me a little:

As an adolescent, I baled hay with my uncle and father. Through the summers, I’d be surprised on any given morning that we would be in the fields for the afternoon. My dad played Johnny Cash on the drive over. We worked in the July heat with the sun bubbling our skin for hours. My small frame struggled under the dry straw’s weight. After three or four hundred bales, after being bitten by mosquitos and explored by long-legged spiders, after being caked in dust and sweat, I’d return home to a shower and nap on the couch.

Pansy From the Hills

Two Truths and a Lie (Guided):

1) When did you last spend a night alone on purpose and enjoy it?
2) How many times did you forget to take out the trash last month?
3) Do you feel more at home in the city or the sticks?

At eleven years old, I went to a folk festival that my friend’s father threw together. I ate custard for the first time as a band covered Buffalo Springsteen’s “For What It’s Worth.”

Lindsey Baker’s first two albums are uncomfortably intimate. Mainly acoustic guitar and her raspy, almost rudely child-like vocals, she could run you through traumatic experiences like you were reading her diary. The first half of “Metal Arms” recalls this era, while the ending blooms into a cathartic slow-jam, organs and all.

“But they want to put a bag/ over my ugly head./ All the kids are talking/ all kinds of shit.” – Guts Club on “Ugly Igloo.”

“My face was a Hefty bag.” – Guts Club on “Mustard Tears”

After practicing for years on my own, I performed at an open mic for the first time when I was 18. It was nerve-wracking but I stumbled through the performance and felt pride. I went back to my room afterwards and drowned my ears in the masterpiece of Lindsey Baker’s “Rad Rug.” If it had been a couple of years later, I would have chosen “Bowling.”

It’s too cold to go outside without layers now. It feels colder than it actually is, with the wind cutting through flannel decidedly too thin. Autumn in Western Massachusetts feels more bitter than in the East for some reason. In this swirling blue, “Jackpot” recites “close your eyes” like a hymn.

It would be a shame to compare this record to the artist’s past two without recognizing the amount of strength in Lindsey’s voice. The most striking aspect of her past songs was her crackling voice, as if it could give out at any time. The vocals on “Trench Foot” are not simply more reserved – that sounds too defeated. The difference is there is more confidence, more firmness in Lindsey’s voice.

Country giants like Loretta Lynn and Dolly Parton continue to make music into their golden years, songs that sound as incredible as their classic material. Even Leonard Cohen, one named influence of Lindsey Baker, went darker until his final moments. This seems to be the timeless path that Guts Club was destined for. Even if they don’t continue to make music decades from now – who knows? – these songs sound as if they belong to any period. As long as an audience finds the time for them.