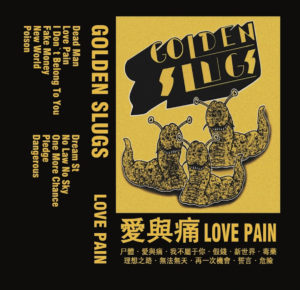 Golden Slug’s album Love Pain is a phenomenal first release from this Western MA punk band. Allow me to gush.

Self-described as 中文朋克 (or “Chinese punk,” if Google translate correctly helped me decipher), Golden Slugs put out a very fast 11 songs – the entire album cycles through in less than 23 minutes – but it’s as if the best parts of different old school hardcore and punk has been wonderfully distilled into gravel-voiced droplets that slam through your ears in minute-or-two increments.

The title track is like any of your favorite Orange County punks with classic 1-2-1-2-1-2 beats, a walking bass line, and a three-chord punk guitar. Looking for Cro-Mags-style NYC hardcore? “Fake Money” is the ticket with its super-fast guitar work and breakdowns. Maybe some Bay Area punk coupled with a rad little ska homage? Go for track 6, “Poison,” and pogo-skank your heart out.  Golden Slugs have taken the best of those vibes, siphoned it through their own Slug sensibility, and produced a very good album that’s both a classic addition to street punk and a seriously fresh take.

My favorite song comes toward the end – “Pledge” – and may be the slowest in tempo of the 11 (if you can call any of these slow) with a tight bass intro (I’m a sucker for a good bass intro) and melodic guitar solos before the album culminates in “Dangerous,” an anthem ready to be shouted along to.

This is an album that makes you want to hear and see these songs live on stage or in a sweaty basement because you know they’re all gonna be great live, too. But when you have to wait for a show, you know you’ve got a spare 23 minutes to listen to the album. Initially released via Golden Slugs’s bandcamp last December, Love Pain was subsequently put out last  February and can be downloaded via Western MA’s Salvageable Filth Records.