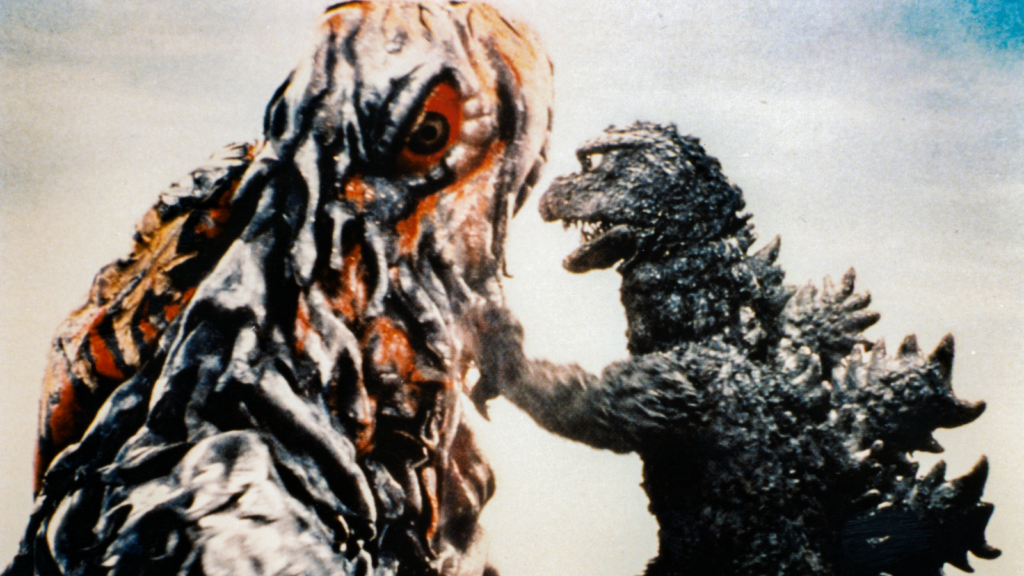 Earlier this week, the Criterion Collection unleashed their 1000th numerical release, and it’s a mic drop of physical media: an eye-popping box set/coffee table book containing all 15 films from Toho’s original 21-year run of Godzilla films, lovingly restored in their original, subtitled forms (often radically different from the versions that hit American shores). For kaiju fans, the set is obviously essential (due to various rights issues, it’s the first time all 15 titles have been assembled in one package), but it also affords an intriguing opportunity for reassessment; after all, by receiving the Criterion stamp of approval, such oddball characters as Jet Jaguar and Minilla officially join the ranks of Toshiro Mifune and Max Von Sydow. Sure, we all loved these suitmation beat-em-ups as kids, but are they [deep sigh] “cinema?”

Upon getting my grubby mitts on the Criterion set, the question became, where to start? Rather than revisiting one of my old favorites (in due time, Monster Zero), I opted for one I hadn’t seen: Godzilla vs. Hedorah, a film which was long considered a lesser entry, but has lately been developing something of a larger cult following. And I am here to tell you: this film is something else.

It is apparent within seconds that this is not your usual monster movie: the opening credits are accompanied by an on-camera chanteuse singing a James Bond-style theme song about the dangers of pollution (“Cyanogen, manganese, vanadium! / Chromium, potassium, strontium! / Filthy polluted air! Filthy polluted air!”)*. This theme extends to the film itself. The titular antagonist, Hedorah, is some sort of alien being which feeds on air and water pollution and spreads toxic chemicals and radiation. Fortunately for Japan, Godzilla is at this point in his career essentially a superhero (a point made literal by the film’s token monster-kid, Ken, who is first seen playing with Godzilla action figures and describes the monster as “a Superman”). From here, the story itself follows the standard kaiju beats, as Godzilla and Hedorah smash a few model buildings before taking their skirmishes to a more sparsely populated mountain range.

Ah, but that description doesn’t adequately describe this film’s eccentricities. How does one explain the periodic hand-painted cartoon sequences, which come out of nowhere and resemble segments from 1970s Sesame Street? Or the scene in which Ken’s hep young uncle drowns his troubles at a psychedelic Tokyo nightclub, only to hallucinate that all his fellow dancers are wearing oversized fish masks? The “Dance A-Go-Go” love-in spontaneously organized in protest at the foot of Mount Fuji? The postmodern montages of news pundits debating the monster crisis, intercut with skulls and even more fish masks? The fact that Godzilla can not only fly, but does it like this? By the time we learn that Ken has some sort of unexplained psychic connection with Godzilla, we’re well past the point of questioning it.

Then there’s Hedorah himself, who is easily the strangest foe the big G ever encountered. Where the vast majority of Japanese kaiju are some manner of dinosaur, dragon, or giant animal, Hedorah is a shambling, asymmetrical mound of seaweed, slime, and organs. He takes on several forms, ranging from guy-in-a-suit biped to giant aquatic tadpole to something resembling a flying saucer with angry eyes. He feeds by putting his mouth (?) on a smokestack and slurping up smog. More than perhaps any other monster of the kaiju canon, Hedorah nearly verges into body horror: he can reassemble himself from the sludgy pieces that get blown off of him, and when Godzilla lands a punch, his arm sinks in up to the elbow with a sickening squish. And I know that sometimes a kaiju is just a kaiju and I’m sorry, but there is simply no way to describe Hedorah’s sideways-slit eyes without using the word “vaginal,” especially when they become inflamed and start oozing fluid.

And yet, despite all its silliness and weirdness, Godzilla vs. Hedorah is perhaps the only Godzilla sequel to approach the true horror of the first film. Godzilla was, after all, originally conceived as a 1:1 metaphor for the hydrogen bomb, a point made crystal clear during that film’s long, wordless walks through radiation wards full of children (unsurprisingly omitted from the American release in 1954). Hedorah doesn’t go that far, to be sure, but it does go out of its way to show a specific human death toll unusual for the series. Everywhere Hedorah goes, people keel over with horrific, gangrenous rashes, and within seconds are reduced to skeletons. Does it reach the somber horror of Ishiro Honda’s original vision? Not quite, but it’s still pretty strong stuff for what was, at that point, essentially a children’s series.

All of this is to say that the Godzilla films are indeed worthy of reappraisal, and there’s never been a better way to do so than with Janus Films’ gorgeous new restorations. Godzilla vs. Hedorah may not be a classic of world cinema, but it is dazzlingly strange and inventive; in its idiosyncratic visual flourishes and edits, there’s not a world of daylight between this and Nobuhiko Obayashi’s Hausu. It certainly may be the weirdest entry in the series (which is no mean feat). Does Godzilla have the chops of Sir Laurence Olivier? Maybe not, but he can certainly smash more buildings– and in the end, isn’t that just as important?