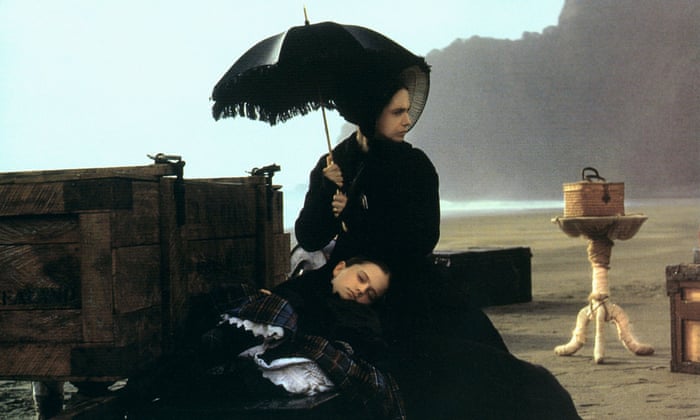 In The Piano (1993), Jane Campion crafts a gothic romance that exposes the porous boundary between reality and imagination. Holly Hunter plays Ada McGrath, a Scottish woman sold in marriage to Alisdair Stewart (Sam Neill), a colonist in New Zealand. Ada, who at the age of six decided to no longer speak, finds alternative ways to communicate: she signs with her young daughter Flora (Anna Paquin), writes notes on slips of paper, and channels her emotions through her piano. The instrument has become an extension of herself, and her playing arouses the interest of George Baines (Harvey Keitel), Stewart’s rugged neighbor. The story accumulates self-awareness as it advances. Fairy tales and folk songs that Campion alludes to, like Bluebeard, Little Red Riding Hood, and Barbara Allen, soon bleed into the narrative itself and create an atmosphere of impending doom. As the film calls each of the characters to their fate, the darkness and passion inside them spills out onto the screen.

The Piano is a movie about desire, which for Campion is always tangled with power, danger, and capital. Emotional impulses are arbitrated in the same way as property. By purchasing the piano from Stewart for eighty acres of land, Baines tries to buy Ada too, and the piano becomes the site of their sexual confrontation. Campion renders sexual longing in surprising ways. Few other films would choose to portray a man’s lust by showing him gently cleaning a piano, in the nude. Innocuous images like a dirty fingernail or a hole in a stocking swell with erotic charge under the director’s mischievous gaze. Pleasure is rapturous, but also coercive, guided by uneasy negotiations of power. But The Piano resists a moralistic interpretation. Instead, it emphasizes the inseparability of love and hate, pain and tenderness.

The movie’s colonial setting offers many such dichotomies, as Stewart and his household attempt to cultivate the wilderness, and maintain old world decorum in their new surroundings. Any success is the result of the settlers’ obstinacy and ignorance. They repeatedly fail to comprehend the physical and cultural conditions of their environment, like why it may be difficult to carry a piano through a rainforest, or why Māori burial grounds are not for sale.

The Piano is bookended by two ocean journeys — a fitting way to open and close a film of such enormity, whose emotions are as vast, thick, and unwieldy as its island setting. It’s a good thing, then, that we have the opportunity to see it on the big screen this Thursday. Withstanding all the reviews, essays, and scholarly work written about The Piano over the years, it’s a movie that must be seen to be felt and understood. As Ada shows us, there are some things whose meaning exists beyond language — and this beautiful, mysterious film is surely one of them.