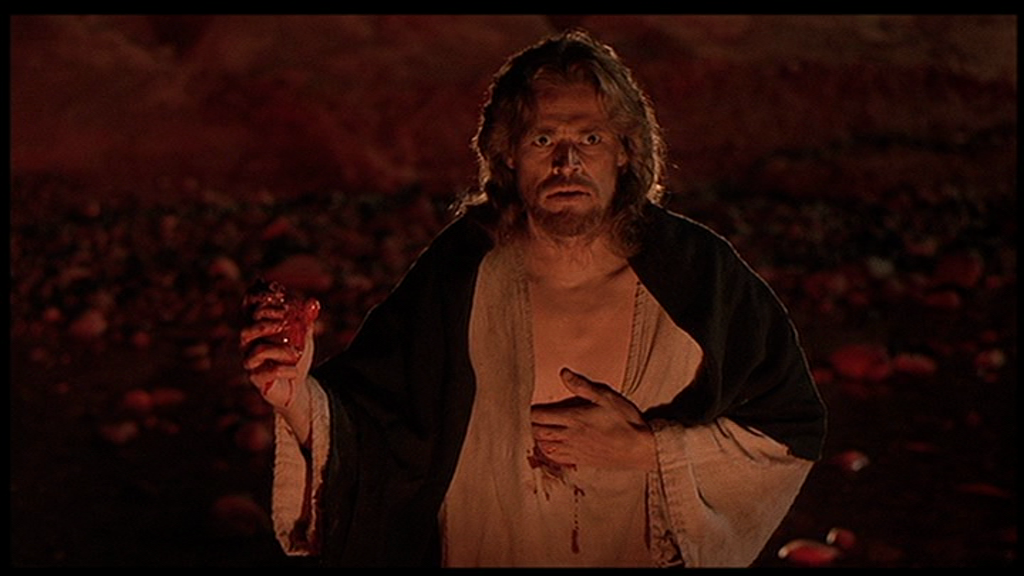 When I worked at my undergraduate institution’s writing center, a nerdy film student came in one day for “another set of eyes” on his essay. He summarized the film his paper was about, Paul Schrader’s Hardcore, since I had never seen it. An alumnus of our school, Schrader’s film is more or less an R-rated, sex-worker-heavy version of a Christian parable. It’s also, frankly, not even that good. Regardless, the way this student, who would eventually become the best man in my wedding, described the meeting space of fervent yet not fundamentalist religiosity, humanism, and filmmaking would correct course the way I thought about visual art. It was one of those defining moments that taught me how to watch movies: watch them as if they matter, as if “the stories we consume relate to important questions of eudaemonia, or human flourishing, and to a civil society.” The Last Temptation of Christ, also written by Schrader, is a movie that matters.

The nominal etymological meaning of impact, “collision, or act of striking against,” provides a useful framework for thinking of Last Temptation’s cultural relevance: it impacted culture, and for that reason alone it’s worth viewing. Religious mythologies no longer needed to be shielded from non-religious cultural explorations. Even if the film itself didn’t shatter this barrier, its presence in the American film canon is symbolic of such an event.

Somewhat relatedly, the narrative influence of Scorsese’s eleventh feature film, to provide just a single example, reaches 2021 through David Lowery’s The Green Knight, whose final act almost depends on knowledge of Last Temptation for it to optimally work. (Of course, it’s impacted culture in other ways, but there’s little need to rehash the protests, the threats, and what-more of fundamentalists here. These objections are well known and are dated into theological oblivion.)

But there’s something else here and it starts with Willem Dafoe’s Jesus. In my opinion as a religion graduate student and film writer, Dafoe’s performance sets his Jesus apart from just about every other filmic version of the Christian namesake. Most significantly, Jesus’ dual ontology of human and God is fundamental to what Dafoe is doing. He’s as equally conflicted about whether or not he is God as he is about how to be a man. In one scene, Judas (Harvey Keitel) even calls Jesus out on his indecisiveness: “No, you listen! Everyday you have a different plan. First it’s love, then it’s the ax, and now you have to die.” By capturing the internal conflict created by Jesus’s dual identity—to the irony of the film’s fundamentalist dissenters—I can think of no other film that more accurately captures orthodox beliefs surrounding his two natures.

Schrader’s thematic material paired with Scorsese’s direction makes for the real crux of this masterpiece. When Jesus first tells his disciples to eat his flesh, he does so by ripping his heart out; as Dafoe pulls the ripe red ball out of his chest, the frame is washed with a technicolored crimson. On one level, this simply emphasizes the weirdness of the command and adds to the drama. But it also participates in the command by baptizing the viewer with Jesus’ blood. Through directorial choices that break verisimilitude, Scorsese and cinematographer Michael Ballhaus invite personal contemplation on the potentially primal image: is it cultic or consecrated? To reimagine the dilemma onto bolder philosophical grounds, is this Christ a “Lord, liar, or lunatic?” Had the pairing of content and form not been nearly as perfect, it would be a miserably over-directed experience rather than something special. To reference an overused meme, “Name a better duo.”

The great film critic Roger Ebert immaculately details another of these examples. “A key shot is when Michael Ballhaus’ camera pushes past Jesus into the sepulcher of the dead Lazarus. It is black inside, contrasted with the blinding sun, and then blacker and blacker until the whole screen is filled with blackness, and held for a few seconds. I take this as an emblem of Jesus’ experience of his miracles, during which he is reaching into an unknowable and frightening void.” What better way to capture the human experience than by pairing something as life-giving and beautiful—the resurrection of a dead loved one—with darkness, the cinematic symbol of evil. The divine and the demonic are close enough to intermingle, problematizing their distinguishability. Dafoe’s Jesus was willing to reach into that void, perhaps not knowing what he would pull out.