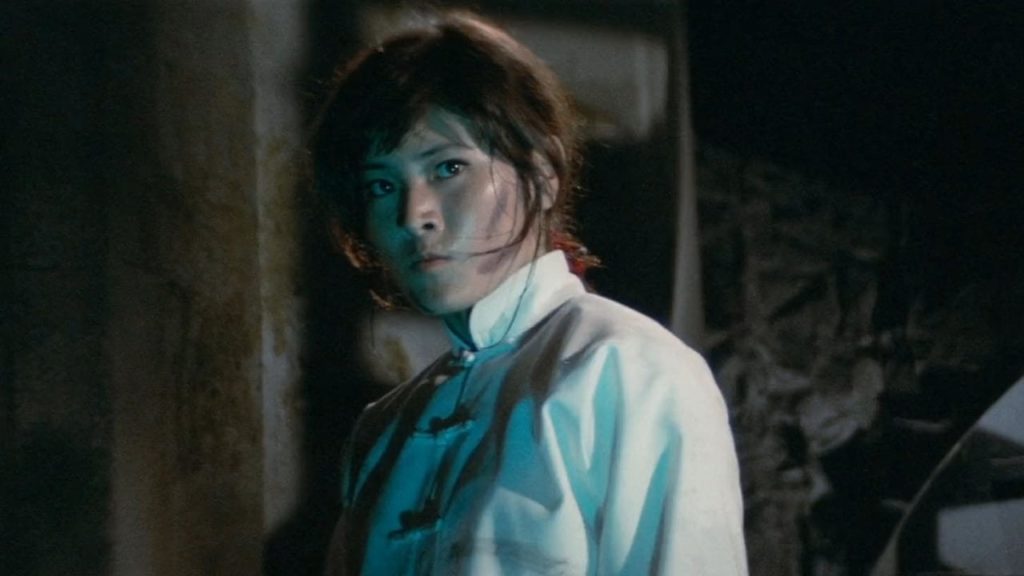 Kazuhiko Yamaguchi’s Sister Street Fighter (1974), screening Saturday at the Coolidge as part of its Kung Fu Connections series, leans towards the more aesthetic side of its genre. Its color palette is distilled to a muted array of blacks, whites, and grays, with the occasional red sprinkled here and there, and the cast teams with a collection of caricatured characters (say that 5 times fast), each sporting their own gimmick. There’s the villainous group of conic masked men christened the “Hammerheads,” the leopard printed gang of Thai kickboxers who go by the “Amazon Seven,” and Kakuzaki (Bin Amatsu), the movie’s big bad whose brave opponents recoil at the five-fingered– or more accurately, the five-clawed– surprise with which he greets these transgressors. It’s…an eclectic film. The seams on which somehow manage to be indiscernible, accomplishing a balancing act seldom seen in others its length. Sister Street Fighter, not only impressively maneuvers, but while at it, flexes for style points.

The sinister underbelly of Hong Kong has swallowed up undercover cop Mansei (Hiroshi Miyauchi), and now his sister, martial arts champion Koryu (Sue Shomi), must journey through the haunts and labyrinthine streets of the criminal underworld in search of him. That is, if he’s still alive. On the way, she’ll encounter a dojo of peace-loving marital artists who oxymoronically aid her on her Dante-esque quest to the 9th circle, in which they carve a path into the very maw of depravity, along which the lines between vengeance and retribution blur.

But can you blame them? The movie’s villain, the shaded Kakuzaki, in conjunction with the one of the most creative plots for smuggling heroin I’ve yet to hear, poses a great threat to Koryu’s mission. He plants a motley crew of warriors along her path, each attempting to kill her, or at the very least wear her down in their own specialized fashions. She’ll encounter the aforementioned Amazon Seven, who’ll thrust their hardened ankles at her, as well as the Hammerheads, who really only have their bold fashion statement going for them. Nevertheless, these interactions result in several moments, where the camera and actors work in tandem to create something truly transcendental.

These scenes, however, aren’t solely spectacle; they work to serve the story. As these battles progress, so does the narrative. The film effortlessly weaves in and out of these fight scenes, the tempo of the story not only undisturbed, but tapped out by the kicks and punches these characters thrust. The manner in which these actors fall into place, vacillating between the various tones warranted, is a subtle quality, that though overshadowed by spectacle, does much to give it weight.

What you won’t find in Sister Street Fighter, is a dull moment. It rarely ever falls flat, and the few instances where it may, you best believe it does it with style. A blip within the sprawling collection of sequels, prequels, sequels-to-prequels, and parodies of sequels-to-prequels that defined this genre of film, Sister Street Fighter aims to justify its presence. Which is a superfluous task considering the place it occupies, yet it is ever the more enjoyable for it.

Liked it? Take a second to support Erwin Kamuene on Patreon!