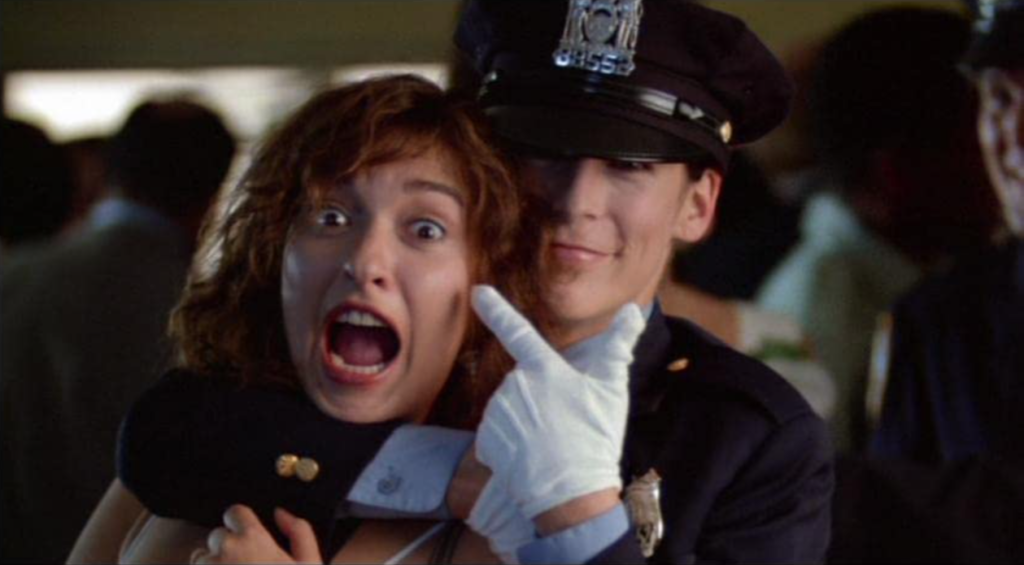 Ah, Jamie Lee Curtis. Scream queen descendant of a scream queen. Unless you were too young and only knew the fun ’00s Curtis from Freaky Friday and Activia commercials, Curtis’s role as a rookie cop in Kathryn Bigelow’s Blue Steel might not be a hot take for those who are in the know. Curtis is cool, chill, and with it. Officer Megan Turner, however, is eager to get her hands deep and dirty in police duty.

On her first post-academy beat, she sees a man trying to rob a supermarket. After he refuses to relinquish his gun, she fatally shoots the man several times. However, when NYPD begins the paperwork, the robber’s weapon is nowhere to be found. Before body cams, there was the word of the cop, witness, and criminal (if left alive). But because no one could affirm that there was an actual weapon and that Megan practically shot until her pistol was empty, she is forced back to the desk until further notice.

Is this misogyny in the works? Most likely. The men in this time period are having a hard time grasping the idea of a normal-appearing woman being interested in policework. Her father is suspiciously ACAB and a blind date wonders how physical attractiveness and a stiff, blue uniform could possibly intertwine. I’m sure this speaks secondhandedly to Bigelow’s own role as one of the very few women directors frolicking in action thrillers at the time (Impulse, which was directed by Sondra Locke and also featured a female cop, was released the same year).

Anyways, it turns out that the weapon was stolen by Eugene (Ron Silver), a Wall Street trader who happened to be at the supermarket on the night of the robbery. It’s not super clear if he decides to act out with maddened abandonment because he was traumatized by the robbery or of because an innate nature, but Eugene uses the gun to kill strangers he comes across in the city. He carves Megan’s name in the bullet casings, implicating her in these murders. Even though the mystery behind the killing dissipates, we’re drawn into the endgame of a perverse cat-and-mouse.

Bigelow effectively made a horror movie out of a police procedural. Not for the fact that there’s a single entity haunting our main character, but for the other concepts that makes a horror movie stand out from other genres: Megan’s circumference of loved ones are decimated and Eugene still hasn’t been jailed, Megan being labeled as crazy despite being plainly truthful, and the deterioration of a naïve dream (“I want to shoot people,” Megan pridefully says when her partner asks why she became a cop — most likely not the case anymore). Even if you only knew fun Curtis, Halloween Curtis makes herself known here.

Playing at Coolidge Corner on Saturday, November 27 as part of NOIRVEMBER