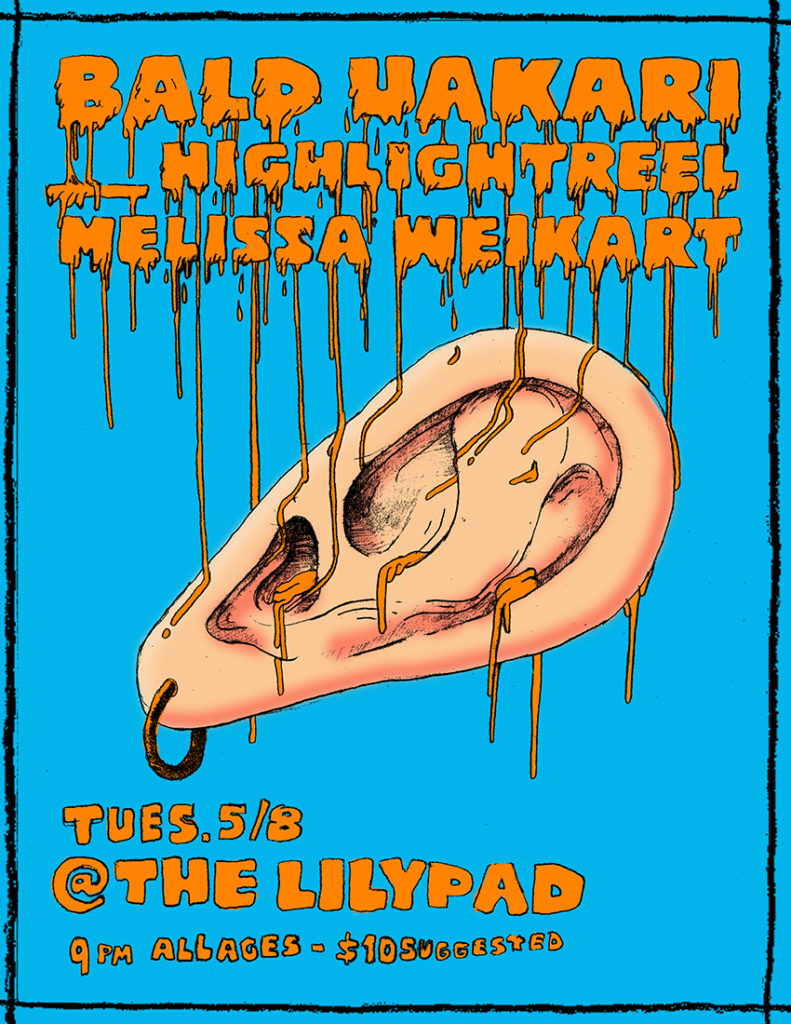 Tuesday at The Lilypad is your one last chance to make your neurosynapses dance (at least this way), as Boston Hassle presents the farewell performance of the challenging, improvisation-heavy ensemble Bald Uakari, with support from jazzy standout piano-navigator Melissa Weikart, and the raved-up trio ____Highlight Reel. This is the late show, so when you arrive and encounter the other crowd of past-tense showgoers don’t hesitate to tell them whats up. I mean, we’d sure hate for anyone to regret missing this momentous occasion.

Bald Uakari is winding down after a three-year run of consistent evolution and innovation within Berklee’s vibrant musician community.  On arriving at this point, leader Greg McRae reflects, “Bald Uakari disbanding makes me incredibly upset… really proved to me that the limits of a cohesive ensemble who rehearses regularly do not really exist. I mean, these guys can do firm pivots in free-improvisation with nothing more than a prep, and can jump in-and-out of densely composed material with the same precision.” Throughout their existence, the group has shifted form and size, at times reaching up to an 11-piece configuration dubbed “Big Uakari”, and contracting to the five-piece “Small Uakari” that awaits for this performance. Previewing the coming event, McRae continued, “we’ll be playing stuff from across the Bald Uakari repertoire (focusing on the more recent work)… At least we’ll be able to play our own funeral, which many bands don’t get the chance to do”.

Rising piano and voice phenomenon Melissa Weikart, who released her debut EP, Coffee (HEC Tapes), in December, will also be appearing. Having just completed her Masters at New England Conservatory, Weikart has become well-versed in the different approaches to playing in a variety of dissimilar settings. “If I’m playing in a bigger venue or if I’m playing in like a small house I tend to sort of structure my setlist around what might work.  Just some of my songs I feel like require more intimate listening, but I usually play similar sets in most places. I just kind of think about the order, and the way I perform them definitely changes with a bigger venue as opposed to a smaller more intimate space where I know people,” explained Weikart on her immersion in both formal and DIY scenes.

Looking to wear your shoes out with a psychedelic sense of rhythmic precision as well? Us too, so be sure to catch ____highlightreel’s set. This cyberpunk trio’ sonic stylings will fuel your imagination’s imagination, and transport your senses into some kind of Gamesharked hall of mirrors. Credited by at least one fan for revitalizing their town’s main industry, ____highlightreel’s name is somewhat fitting, in that while we can’t assure that ____highlightreel will create jobs in your community, they will almost certainly end up on your musical highlight reel for some time to come.

So what’s it gonna be this Tuesday night? Ironing board shopping? Bingo-machine maintenance upkeep? Get real! Tuesdays are for going to see three rad musical performances at a neat spot in Cambridge’s Inman Square. Go buy an ironing board some other day.

Boats is in the house, so we asked them some questions

Join in for the stream on the Hassle Youtube Channel on 5/26 @ 8pm!